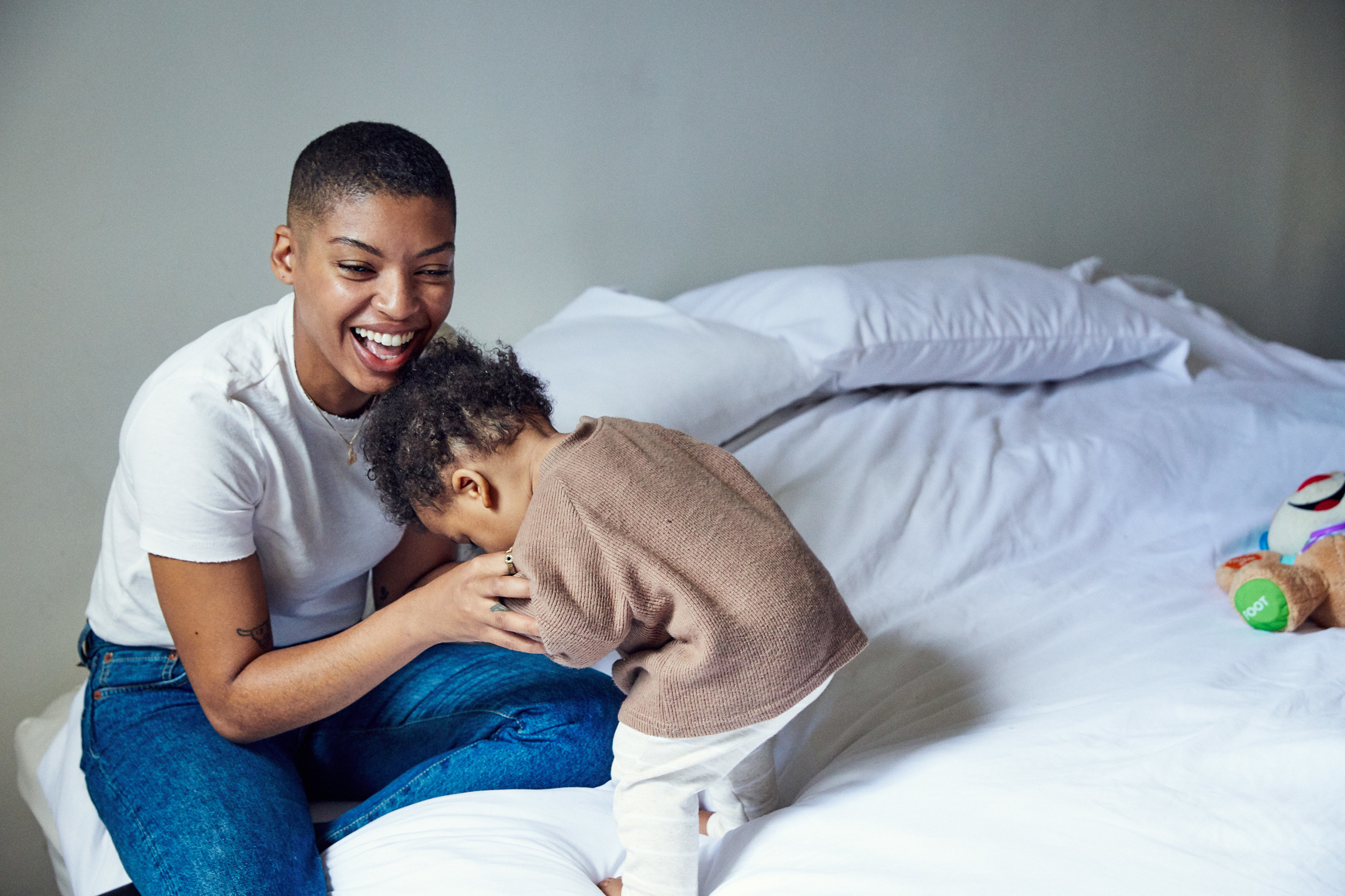 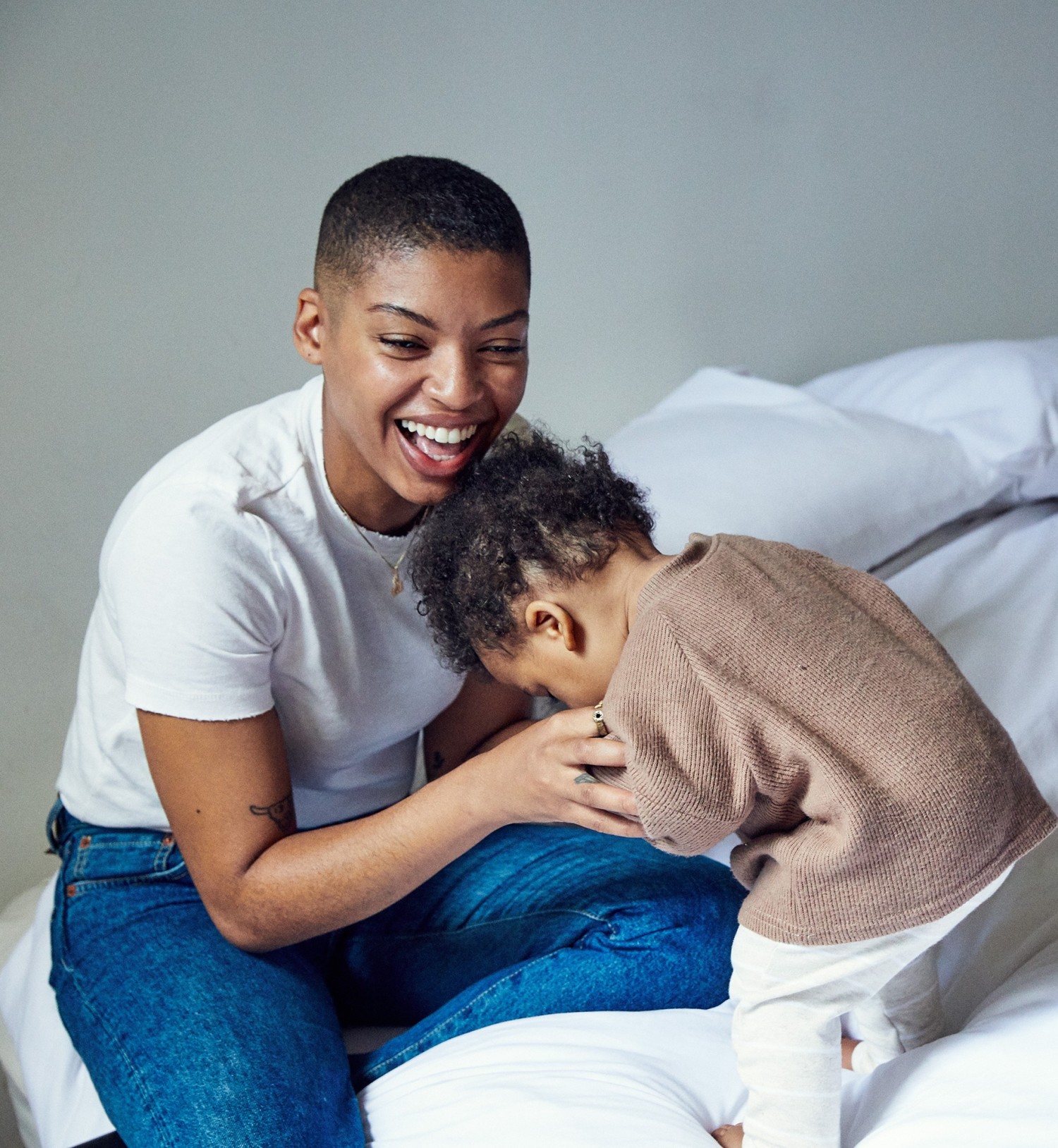 The artist and podcast host on finding catharsis through work, the privilege of being a "cool mom," and changing—but not.

I’m really into storytelling—whatever form of media that takes, from visual art to podcasting to online shows. I try to exhaust all of those. I don’t think you can be a successful artist today without also having an entrepreneurial spirit. You have to know how to market yourself. How to brand yourself. It's not just about making work anymore. I could talk a lot of shit about it, but ultimately it’s the way we live now.

I'd rather figure out how to market myself and have everything funnel back to growth on a personal and professional level. I don't mind it—I think it’s smart. I don't want to just make art, I want to be successful at it. I also don't want to just have Instagram followers, but I want to figure out how that translates into career success and financial stability. One piece doesn't live without the other. You have to know how to market yourself in order to get that done. And I think because of that—and because of my natural inclination to hustle—I like to do a lot of things. 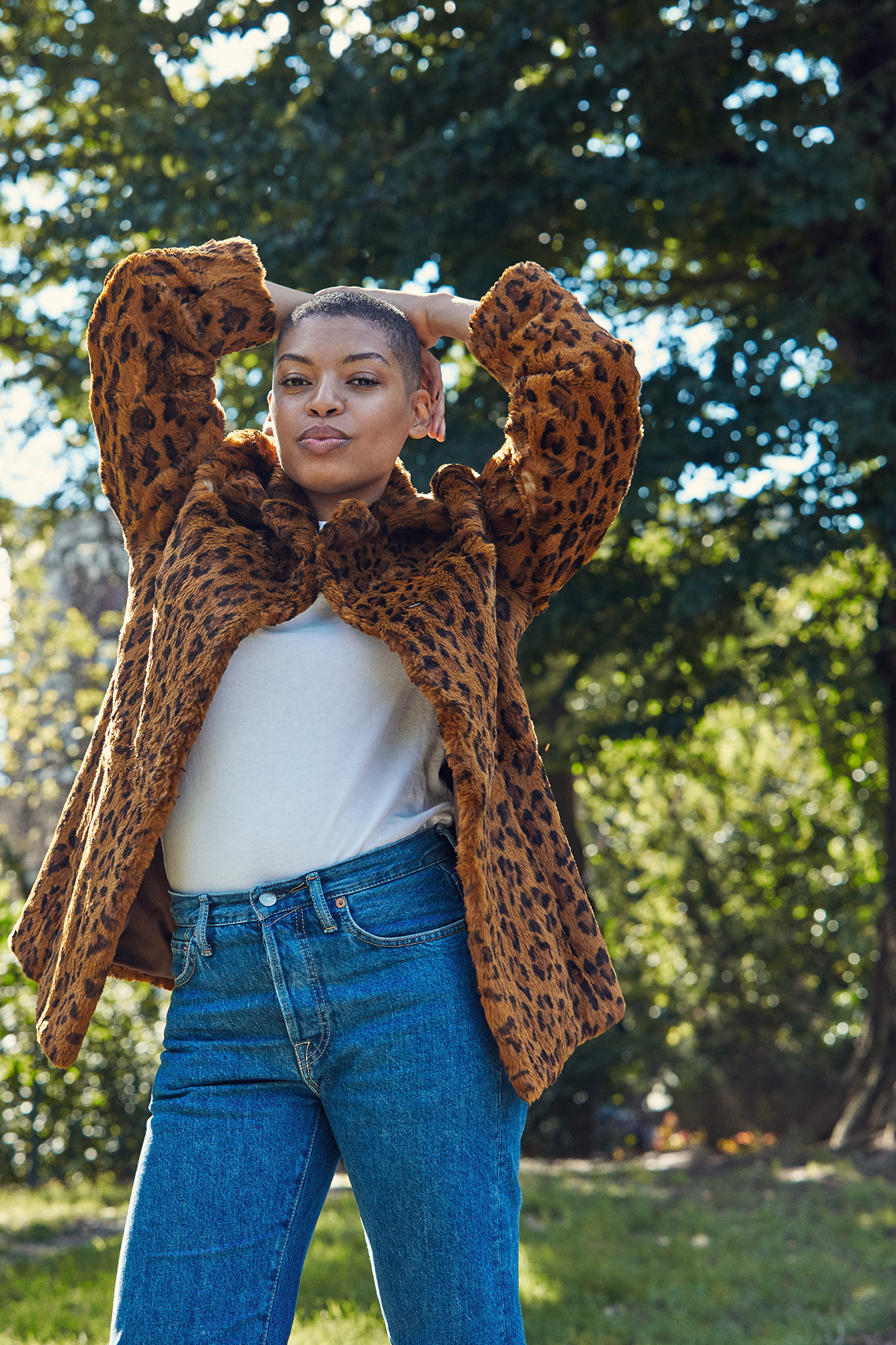 For a long time, I really worried about what long-term success would look like for me, because I do so many things and have so many hyphens. But there are a few people who I think are doing something similar to what I want to do. Like Faith Ringgold. She's a visual artist, but she also illustrates and writes children's books. She paints and quilts. Her outlets for creativity are limitless, and so those kinds of things affirm for me that I can also do all of these things. Maybe not all at once. Right now I’m funneling everything through the lens of motherhood, because that’s what's at the forefront of my life—and probably will be forever.

I haven't done anything for forever, so that’s helped me be a bit more discerning in terms of what I take on and how I move forward. For instance, Cool Moms as a brand: what does that look like three, five, 10, 15 years from now? I'm really interested in making work that lives beyond me. Which is why I really love children's literature. 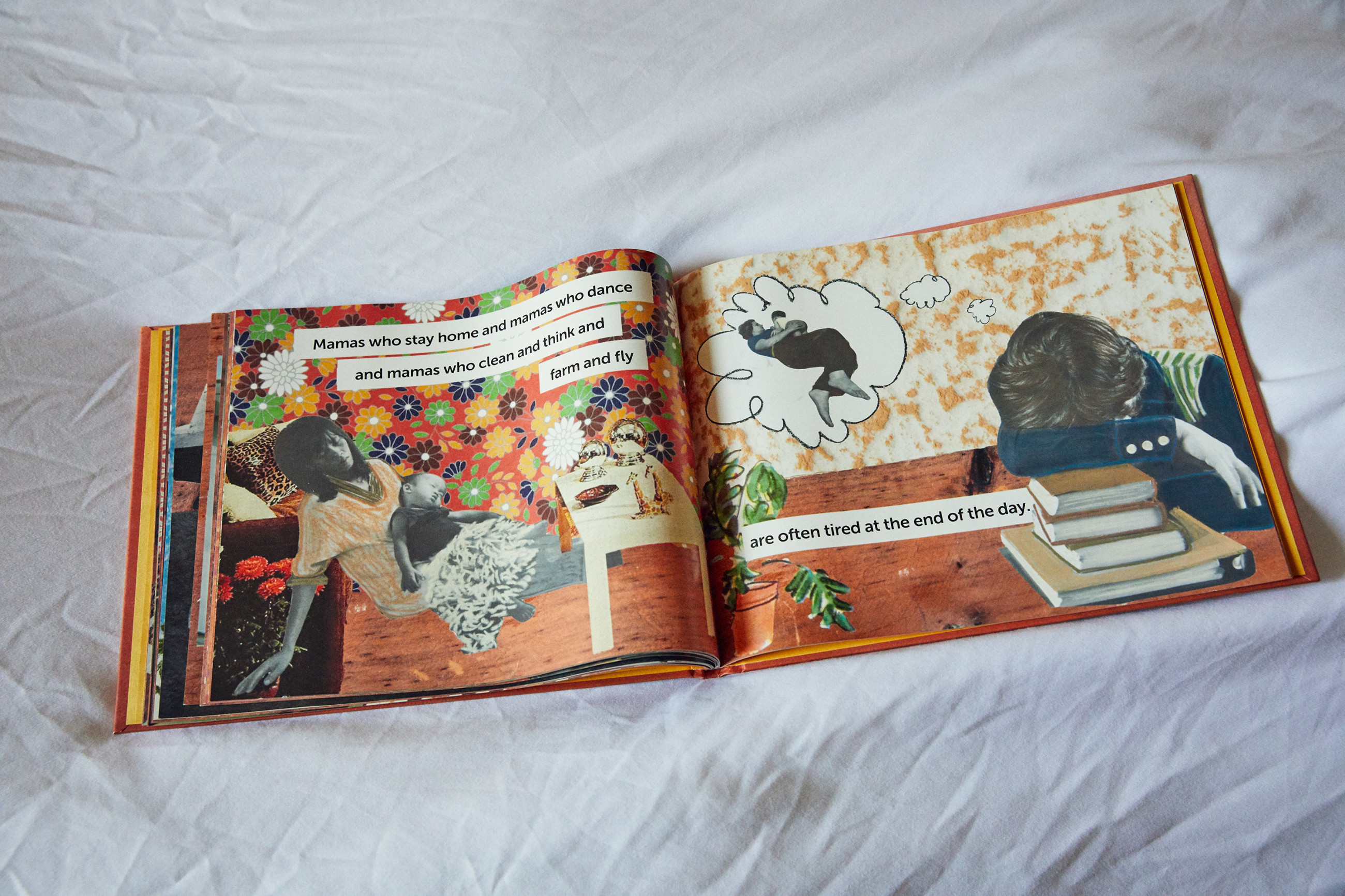 It was actually my dream to illustrate a book—a children's book—for a long time. Probably my whole life. I wasn’t pregnant when I started illustrating How Mamas Love Their Babies; I had no intentions of being a mom anytime soon. But then it happened. You gotta be careful what kind of energy you take on!

I just finished my second one, The Nightlife of Jacuzzi Gaskett, which comes out in January. It's a story about this kid, John, but they call him “Jacuzzi” because that's where he was conceived. He has a single mom, but instead of it being this tragic “single mom tale,” it’s the story of how she had a life. She would go out at night and hang out with her boyfriend and that became his favorite time: taking care of his baby brother. They would create this alternate universe, and imagine who lives there. Do boys have dads there? That kind of thing. Yeah, it's cool. 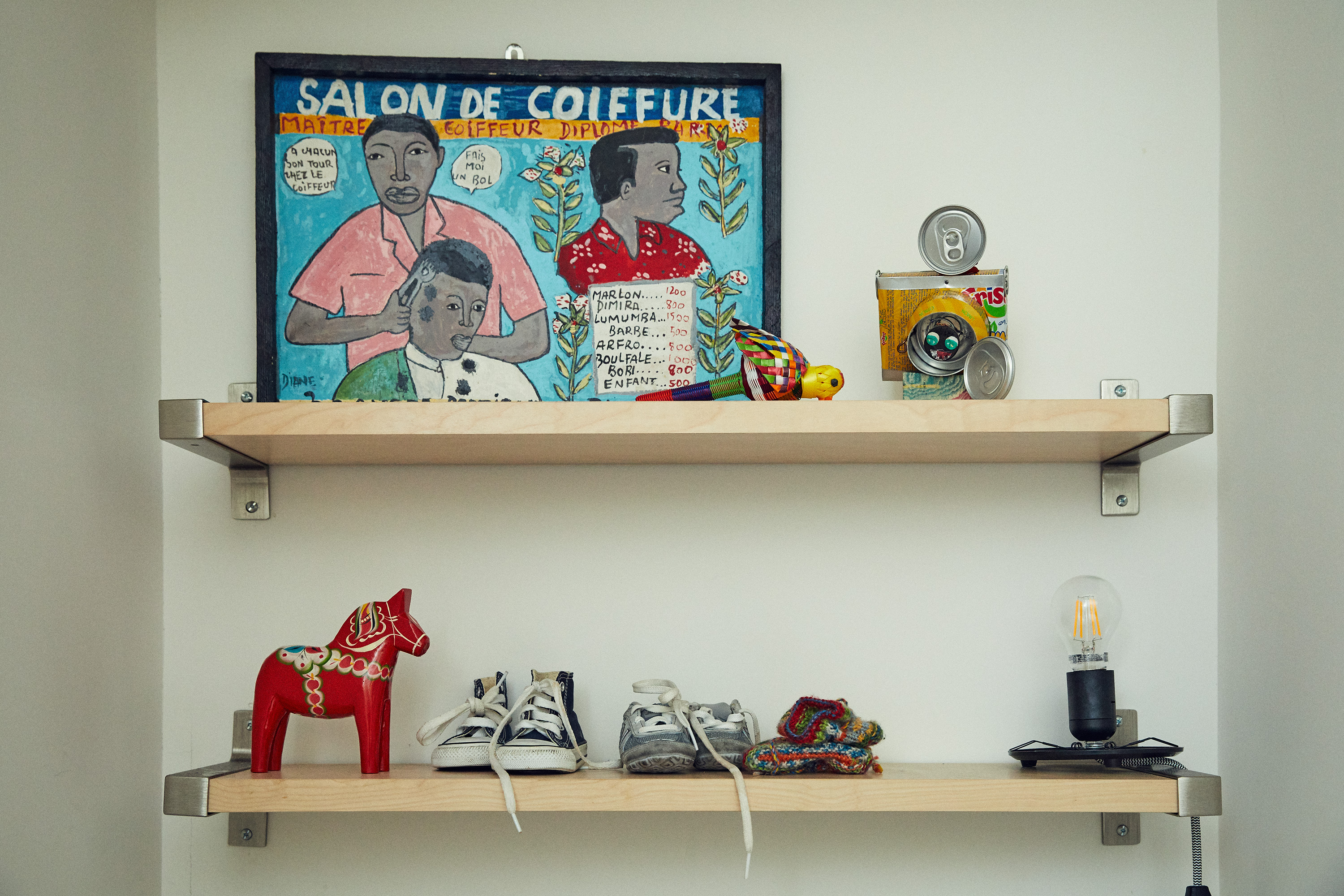 I think art is the way I cope with a lot of things. It’s how I level with the truth. 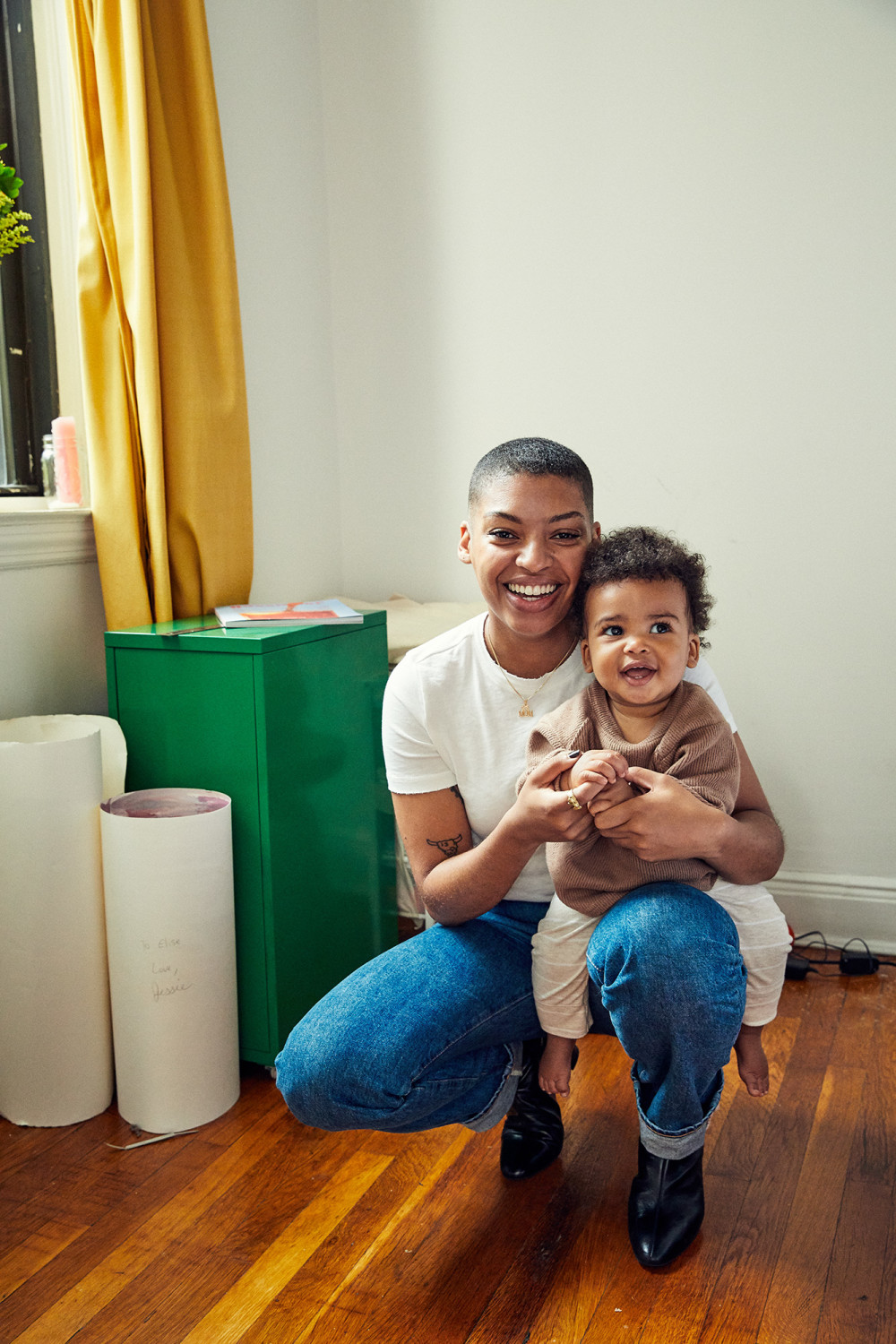 There's been something really timely about both of the books I’ve illustrated. With How Mamas Love Their Babies, Jennifer lost her ability to have children at the same time that I became pregnant. So it was this really special, full-circle moment of the experiences of women around reproductive health. And then with the new book, my biological father died right around the time I took it on, so the illustrations are deeply personal. The project was a way that I coped with his death.

I think art is the way I cope with a lot of things. It’s how I level with the truth, and it makes certain experiences—like trauma and pain—feel as if they’re not in vain. When we have really life-changing experiences—yes, we can grow from them and become better people and all that—but I feel most accomplished if I’m able to create a tangible reminder of that point in time. The book is a beautiful thing that can mean so much to so many people, but for me, it’s a creation of healing. And that’s important to me. I feel like once I make the thing, then I can walk away from it. Now it’s like, that was that time.

I think all of my work centers around identity, power dynamics, and marginalized communities. Being a dom made me a lot more aware of power dynamics, because it's so black and white there. People say exactly what it is they need or want, and then you fulfill that. But I realize that power dynamic exists in every single relationship that we have in life. A huge lesson I learned then was understanding the power of submission, and the power in both roles. I think because I have been so heavily marginalized here in the States as a Black woman, I am constantly looking for real visual and tangible experiences to share where that is not always the case. And women—especially Black women—are at the forefront of so much, that I think it's important for me to share that in my work.

Writing, however, is really anxiety-inducing. I don’t know why because I think I'm pretty good at it. But every single time I take on a writing project, I end up resenting the entire experience. Why did I start this? Why am I doing this? I hate this. I hate it until it's done, and then I'm like, “Oh, I did a pretty good job with this.” But I don't feel the same way about visual art. I get really excited about that process from beginning to end. So I definitely gravitate more toward visual storytelling—and then just talking. That’s where the podcast came in.

A lot of us are right on the precipice of parenthood. You’re one sexual experience away from having a child. It’s very easy to make a kid, not so easy to raise them. So when I had the idea to do Cool Moms, I was like, "Oh, this is it." I was kind of the first of my friends to have a kid, and when I was pregnant everyone was asking me all these mommy questions. I was like, “I have no idea. I'm just doing it. I just started.”

I thought, if all these people have questions, someone has to have answers, so I should figure that out—home in on this community of mothers and the evolving image of what millennial motherhood looks like. It felt like the right time and people have totally come along on the ride. I have three friends who are pregnant now. 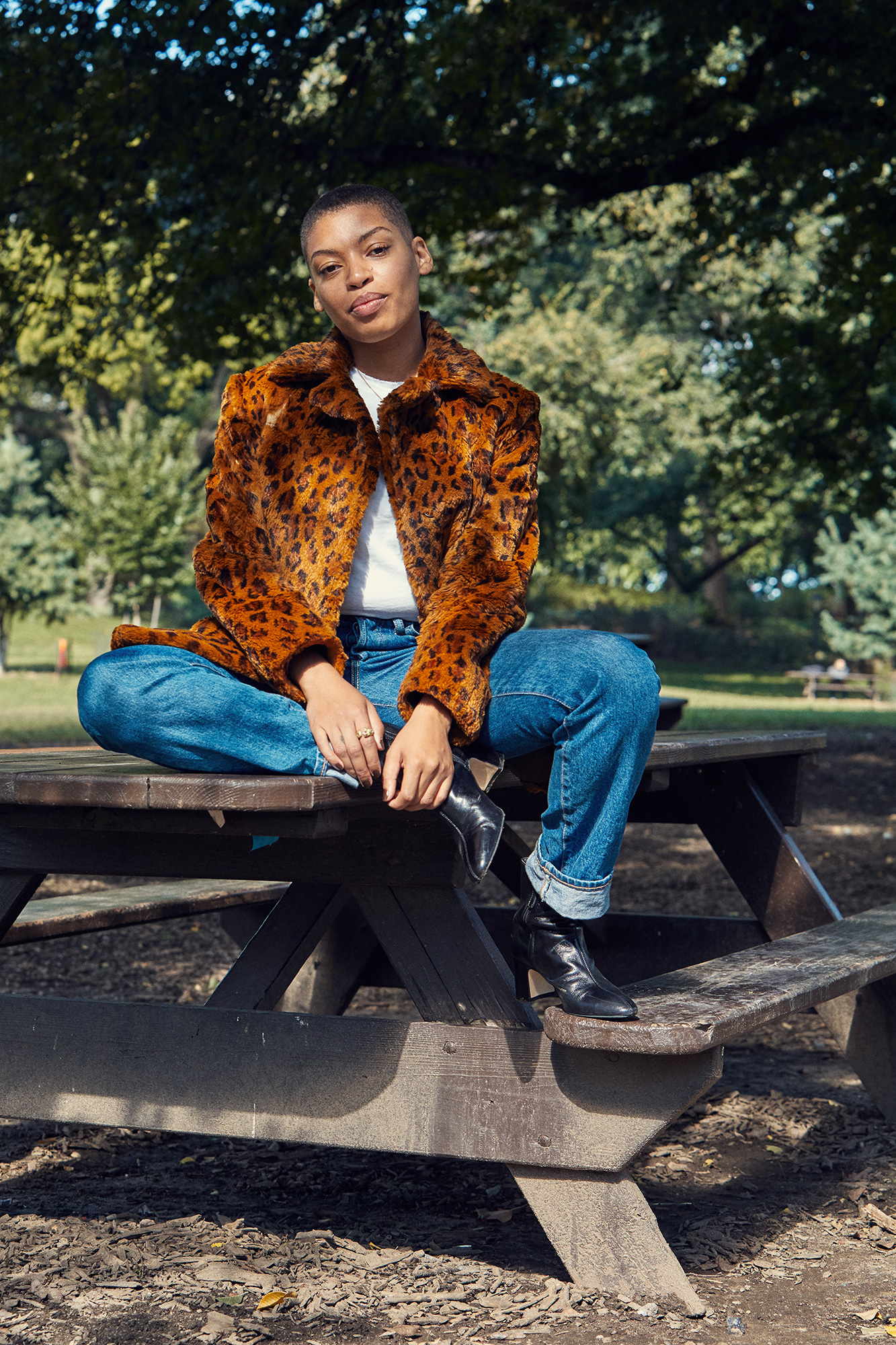 If your evolution and your change are authentic, the people who fuck with you are going to grow with you.

What I like about the podcast is that at no point are Lizzy Okpo, my co-host, and I like, “We are the talking heads of parenting.” No. We just want to give women a platform to talk about their experiences: real, good, bad, and otherwise. Real life shit: I'm starting a business. I'm an artist. I'm a curator. I'm a fucking investment banker. Whatever it is that you do is important, and so is being a good mom. But not, “How do you both?” because men never get asked that question.

I think I'm fortunate in that a lot of people have ridden the wave with me. The thing is, if your evolution and your change are authentic, the people who fuck with you are going to grow with you. I'm always really surprised by the people who are like, “I remember when you used to write a sex column. I loved that, and now I listen to your mom podcast.” That's amazing. I'm still all of those people, but it’s just that my priorities have tightened a bit. I still talk about my sex life, I still talk about cannabis or CBD or whatever. I think there’s a huge misconception when you get into a phase like motherhood where you're like, “Now you're an adult. You're definitely a different person.” And it's like, “Oh, shit, no.” I had a kid and I literally feel the same—for the most part—in terms of who I am, but now I just have more responsibility. 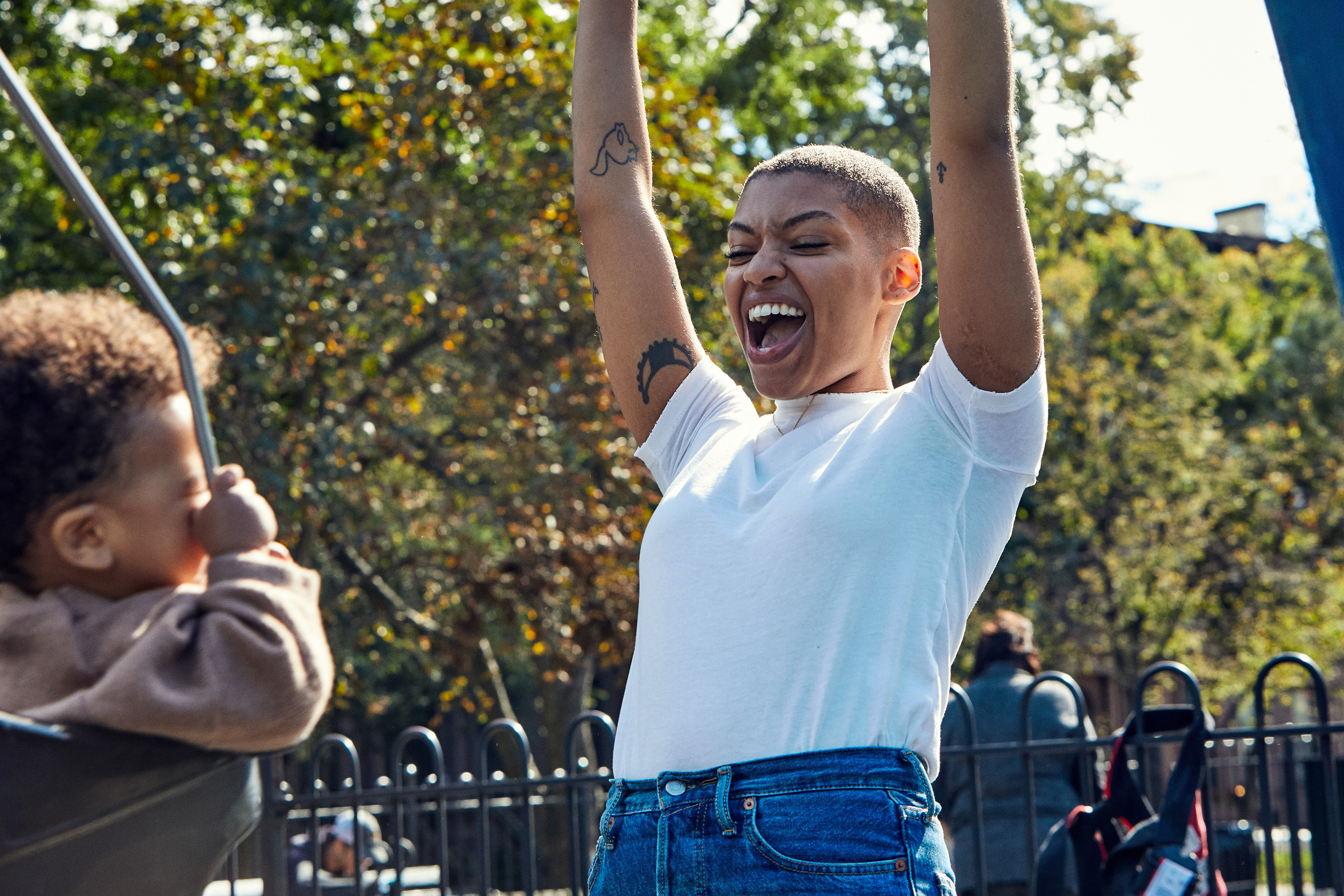 There's nothing that I think is a greater privilege than getting to intimately watch someone become themselves. 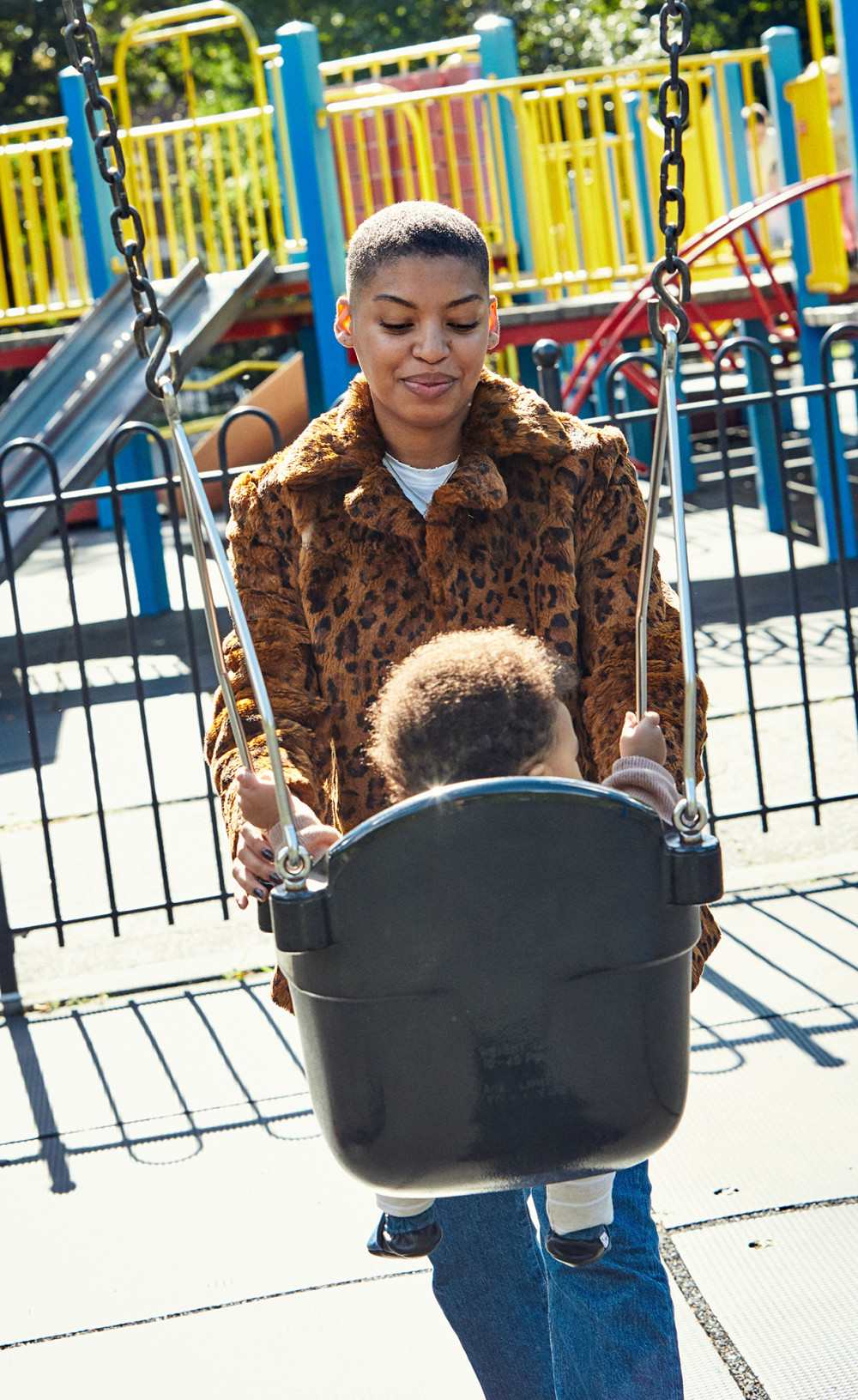 Smoking, for me, is a way to relax. I used to just do it because it was a habitual thing. Then I became pregnant, and had no interest in it. I smoked for the first time again when he was three or four months old. My good friend who has her own business focused on women and weed came into town, and was like, “We should smoke.” So we go in the bathroom and I get high for the first time after having him, and when I came out, I was like, oh shit, I have a baby. It was just the most surreal, existential moment. How did this happen? I have a whole human. He's here.

I cried. It was so beautiful. I was like, man, there’s nothing that I think is a greater privilege than getting to intimately watch someone become themselves. And I was just so grateful and so happy, and because I’d had that experience, I was like, oh, it's nice to smoke every now and again.

I’ve smoked when I’ve gone to a couple of Mommy and Me classes. It feels a lot less silly doing hand clapping and singing about the rain. You enjoy it more. Usually I’m in there with a lot of the older nannies, so I don’t do a lot of chitchatting.

The racial dynamics can be especially jarring because a lot of the time it’s Black women—West Indian women—with white babies. I used to be a nanny so I’ve been on both sides of it. I’m very aware of how I dress, how we present. I’m like, gotta look cute when we leave the house, and do this thing where you kind of like, puff up, so when people look at you and they look at your kid, they’re like, “Oh, that’s your kid. You’re not the nanny.”

I also started using CBD oil for anxiety and because I was having a hard time getting to sleep. So that's become a go-to.

I think there’s a privilege to being a “cool mom” because it’s someone who is able to continue to make their identity and their passions a priority, while still prioritizing parenting. But it doesn’t work like that every day. I have days where I feel like I really killed motherhood, and we had an amazing day. And then there are days where I'm like, “I want you to sit in the playpen, and I want you to watch Sesame Street for like five hours so I can do all of this stuff.” I think I'm a much better artist or writer or host on those days. 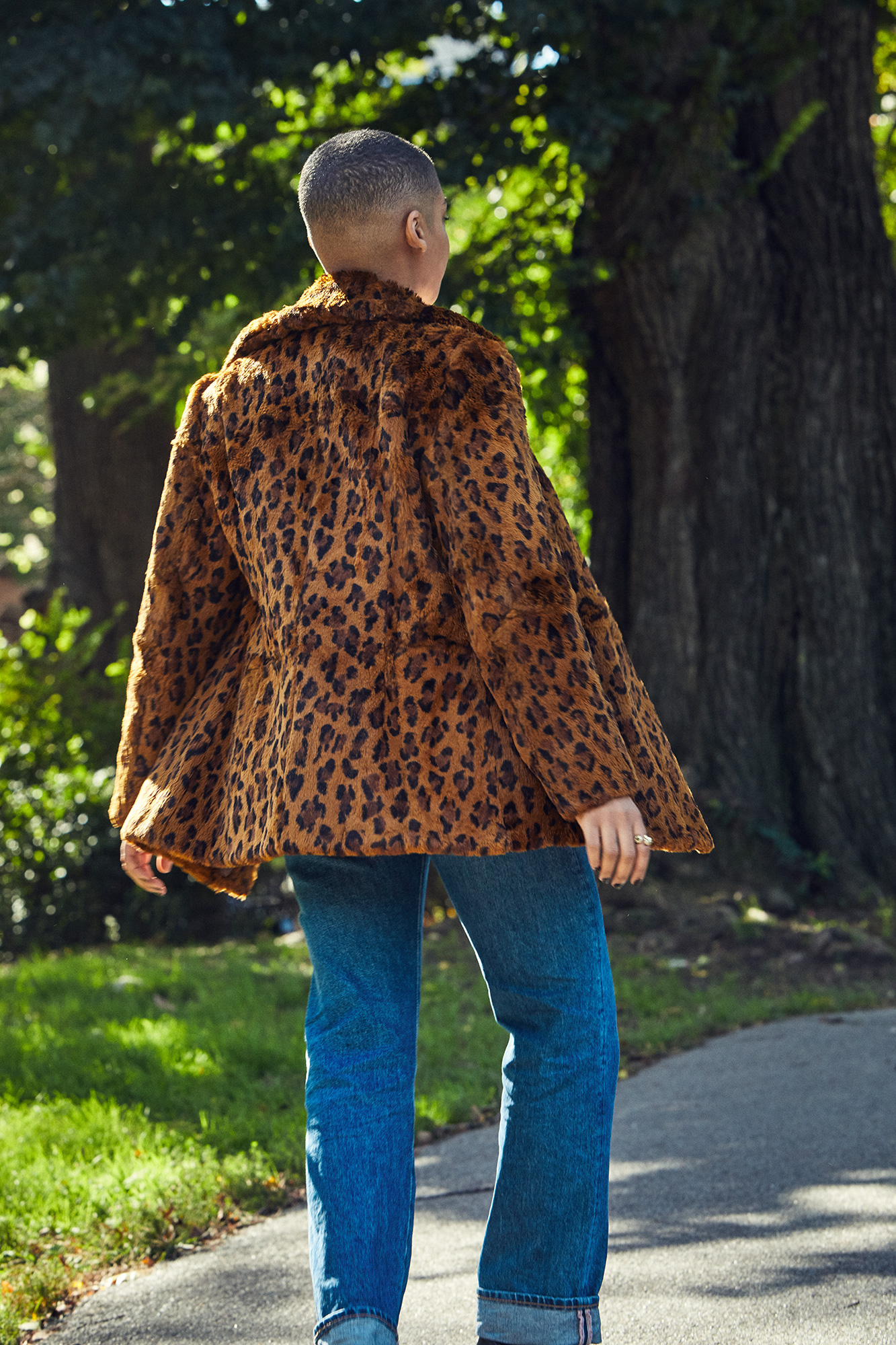 Elise Peterson photographed by Meredith Jenks at her home in Brooklyn, New York. This Conversation has been edited and condensed for clarity. 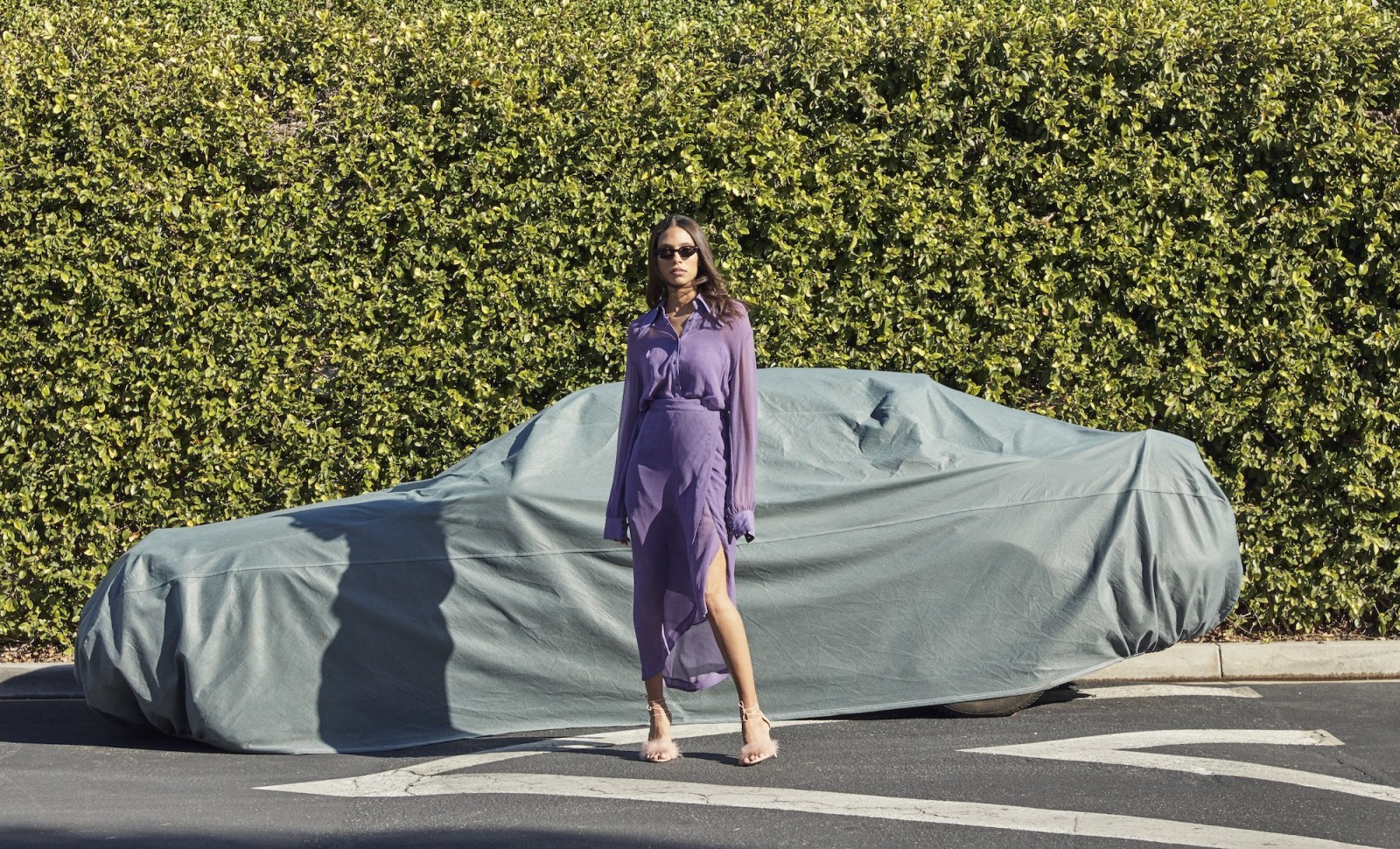