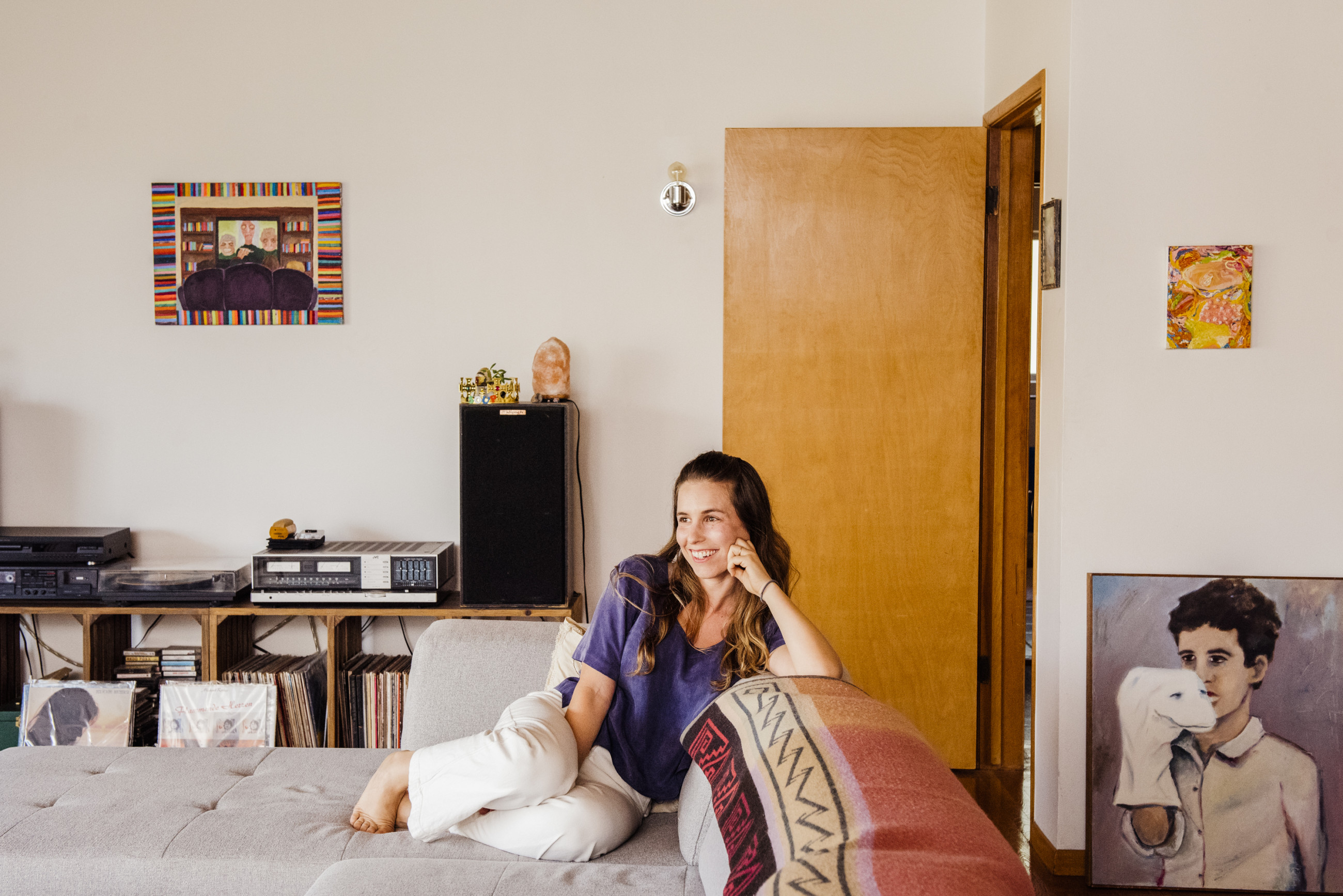 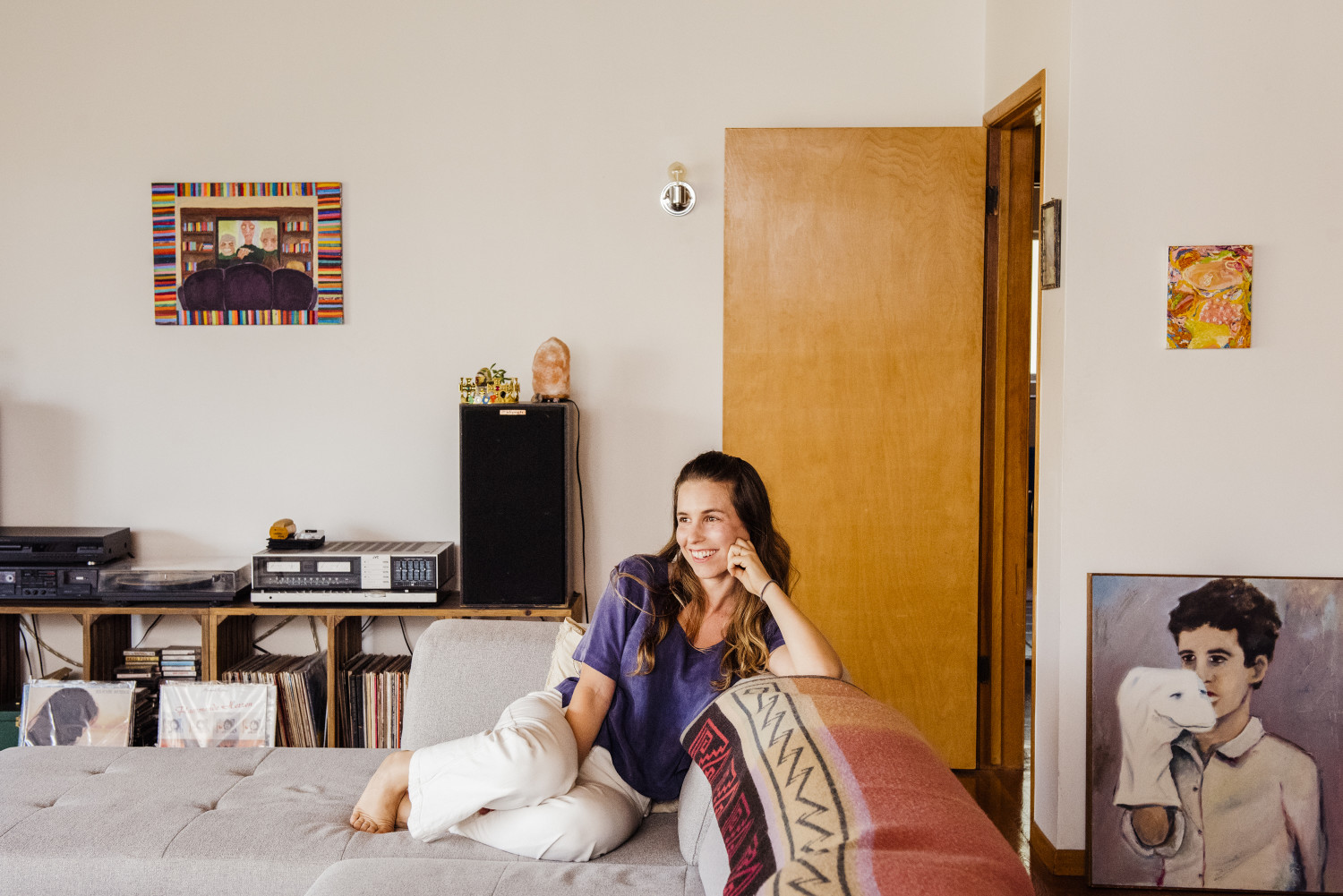 The director on Donald Trump, the dynamics of female friendship, and why edibles freak her out.

I never know how to describe my work because all my movies are different, but I like to make movies about the issues that women encounter that they are maybe too embarrassed or ashamed to talk about. I know not all women have the same experience and that there are other elements besides gender in people's lives, but if you’re a woman, I hope my movies resonate with you and open up a dialogue with yourself or with your friends or the people you’re in a relationship with.

I started off wanting to be an actor. I met my now-husband when he was my T.A. in college and he wanted to be a director, so I acted in some of his movies. They were very small kinda mumblecore-ish movies. It was all very community-oriented filmmaking where everyone was helping each other and everyone was involved, so it wasn't like you were just an actor.

I produced and edited the first feature we made together. Going through that process made me feel like it could be fun to direct a movie on my own. I really enjoyed doing that. I acted in my first movie, but I didn’t in my second one and it was so much more fun. Like, the best time of my life. So that's when I kind of started to consider myself more of a director. Prior to that I had been like, “I'm an actor, who sometimes directs,” but now I definitely consider myself more of a director. 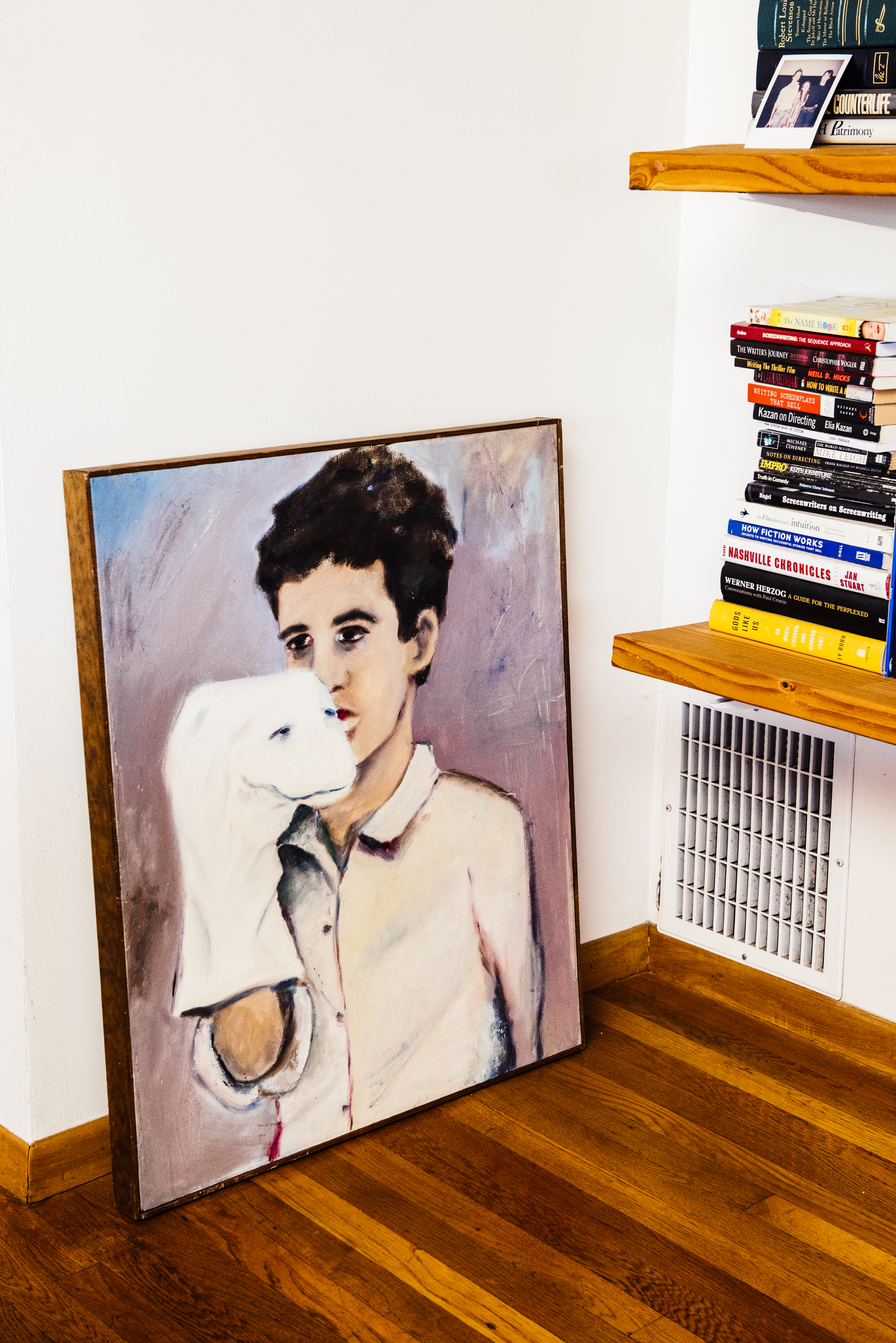 Growing up, I only saw women in front of the camera, and that's who I looked to as role models.

I had this idea in my head that I had to achieve a particular level of success as an actor by a certain age otherwise my time would run out. But I don't feel that way as as a director. I find it very relaxing to feel like the arc of my career can be longer. I can take more chances and explore more issues. As I grow, my art can grow with me.

A friend once said to me that when we were growing up, everyone just assumed women interested in the performing arts wanted to be actors. There wasn't even a question or conversation of whether any other role interested you.

If I were in high school now, I would be like the guys I knew who were making short films together and experimenting, because there are females examples of that now. But when I was growing up, I only saw women in front of the camera, and that's who I looked to as role models. I think I chose that part of the process because in a weird way it's what I was expected to do. 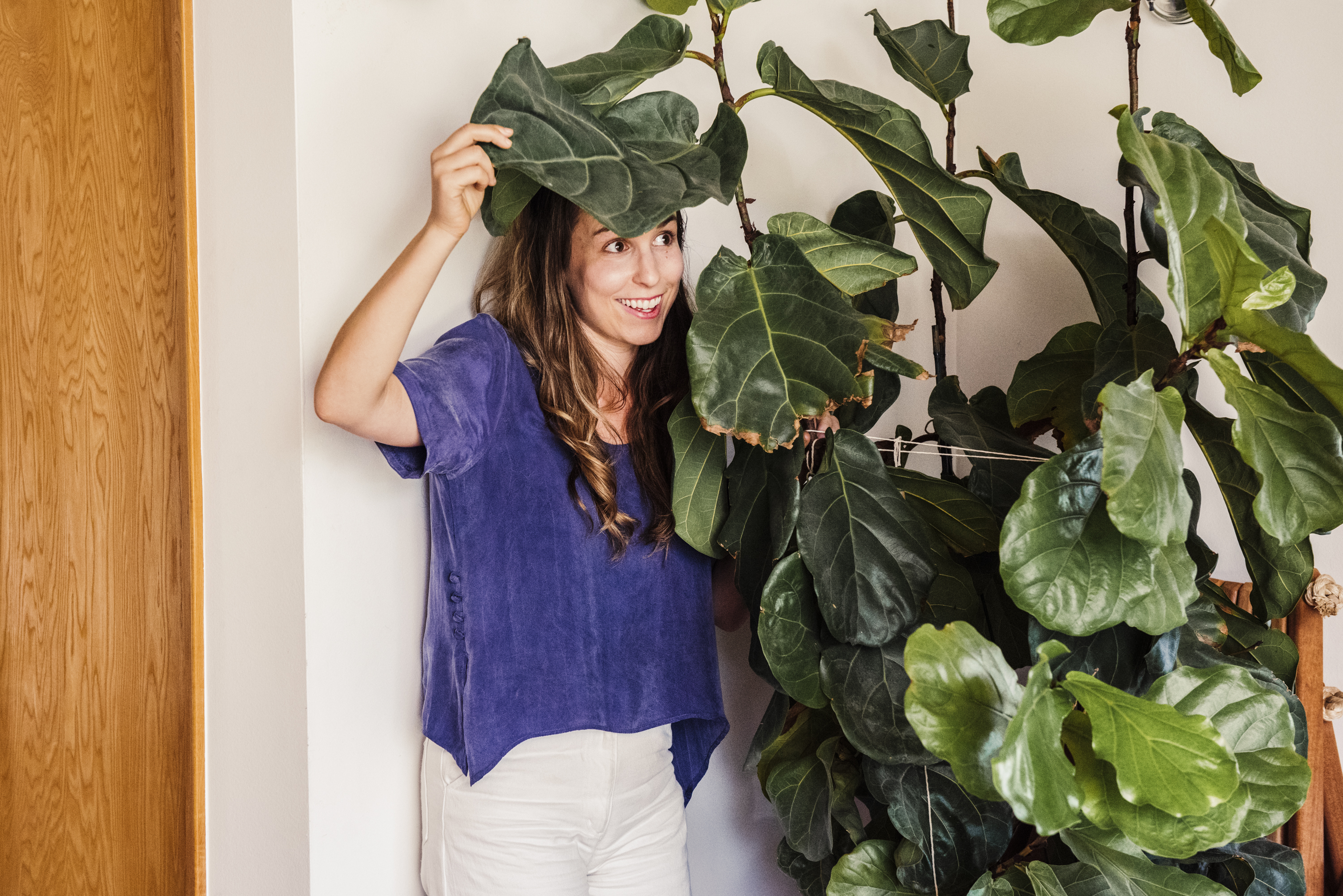 My first two movies were about female friendship. Green was about the jealousy between women when it comes to romance, and then my second movie, Always Shine with Mackenzie Davis and Caitlin Fitzgerald, was about jealousy and competition, but between women in their professional lives—and in this case, actresses. It was also about feeling like you don't necessarily fit into the mold of what you're taught you're supposed to be as a woman. Maybe you feel like you're too big or too aggressive or too opinionated and that you're not playing the game of being the right kind of woman well enough. It can make women feel like they're going crazy because it feels like they're failing.

Always Shine was a sort of a horror-y thriller-y movie, but the next one I'm trying to make is a romantic comedy about aging. Or the next movie I hope to make, I guess. You never know if you're gonna get to make the next one.

I think that women of a certain age are ignored by society a lot of the time and are made to feel like they're not as valuable as, say, a young, hot woman. Youth is fetishized in general in our society, but especially with women. There tends to be a desire to stay young rather than transitioning into owning the power that comes with being older. Of course, it’s easy for me to say this because I'm young, but observing people in my life who are older, there's an obsession with youth and an expectation to stay young as long as possible. And not just in Los Angeles. I think women everywhere feel it. You see women with facelifts in New Jersey, in Connecticut. I grew up in Montclair, New Jersey. It was cool. I went into New York City a lot because it was so close. I'd take acting classes there and my therapist was there. But Montclair was a pretty artsy place to grow up. They had an after-school theater program where you'd spend three hours every single day putting on plays, which was cool.

There's a really great film festival in Montclair now and a couple of our movies played there. It’s been really fun to go back in that context. I mean, I screened my movie in the same theater I saw Election on the night I had my first kiss. It was awesome.

I moved to Los Angeles three years ago. We filmed Always Shine in Big Sur, so it was a combination of falling in love with the California coast and the fact that there were a couple of really brutal New York winters in a row. I was just, like, getting into bed at 4 PM and watching Cheers until I feel asleep, and not accomplishing anything. 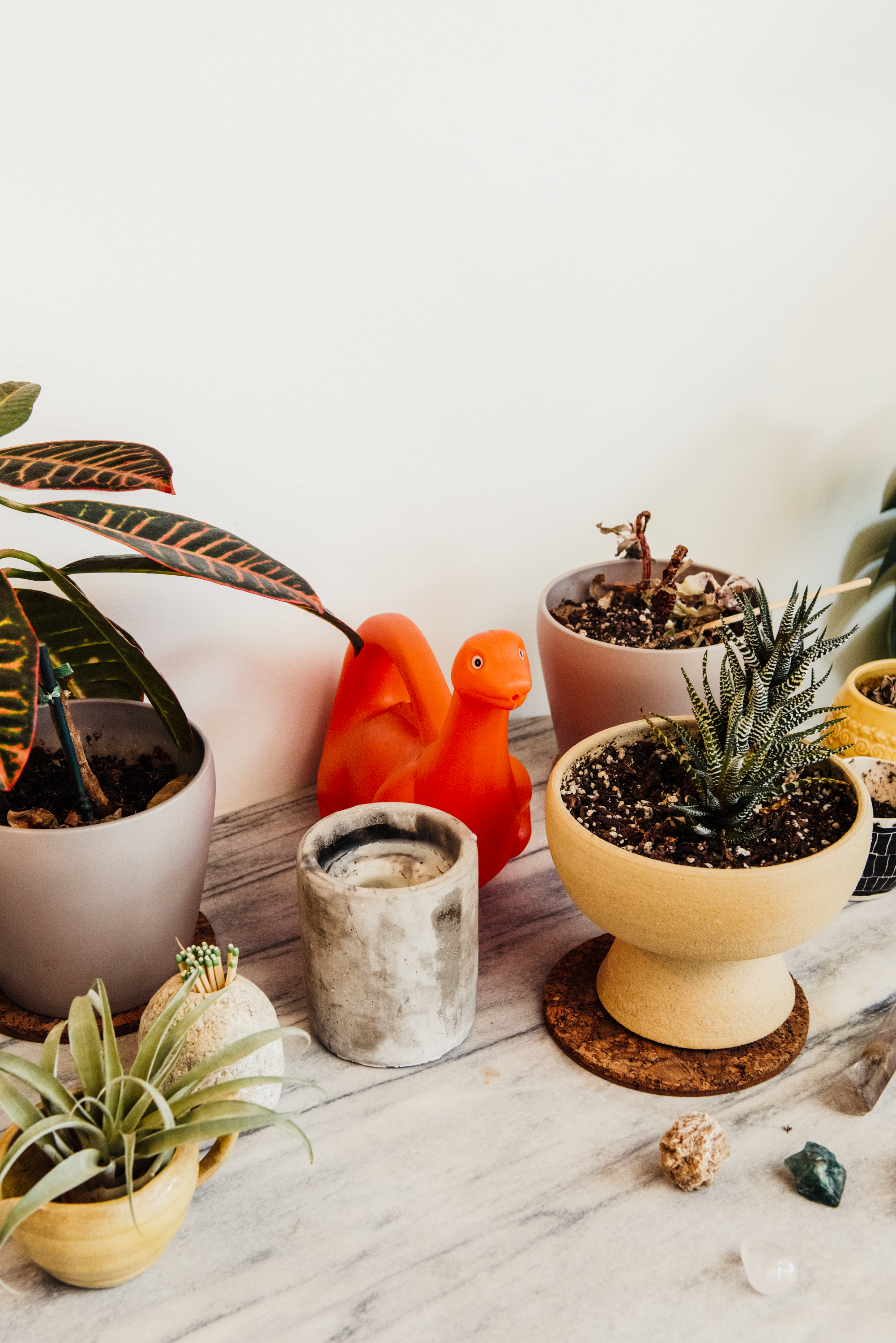 We started spending more and more time out here and a lot of my friends moved here around the same time. The day I flew out to move out here was the same the day that dumb New York Times article about how everybody was moving to L.A. came out. It felt like a mass exodus of creative people.

It’s just less grueling. We found an apartment that was twice as big for half as much money. We get to see trees and mountains. I’m taking tennis lessons. And I feel like the cool stuff that people say about New York isn’t necessarily true anymore, because New York's changed so much. I don't know, maybe everyone always feels this way at this age, like everything was better before, but New York feels like it's really changed since I was a kid. It's just so many more rich people. And I don't like how everything's the same. Actually in a weird way, nothing feels different anywhere anymore. 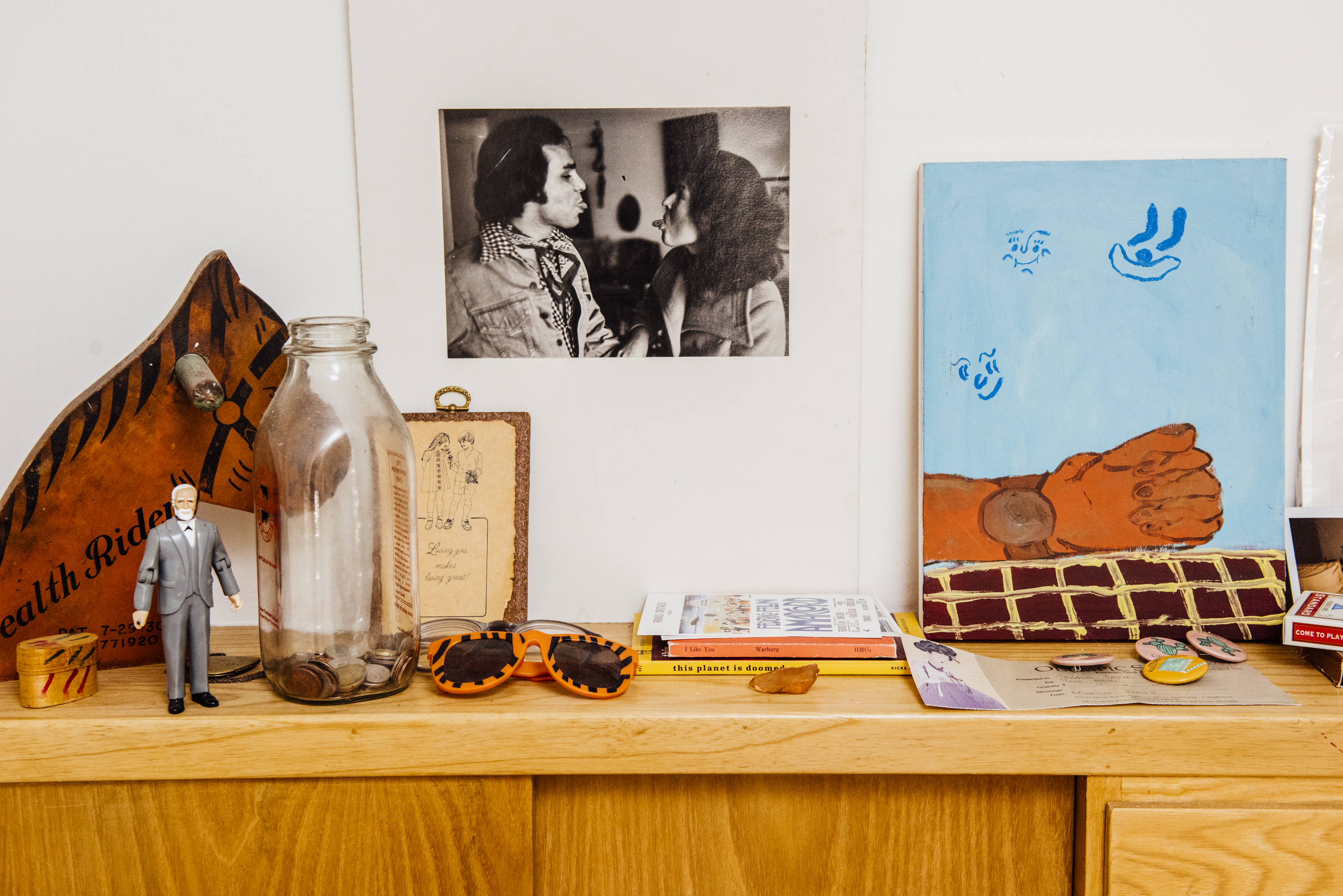 I get so freaked out on edibles. 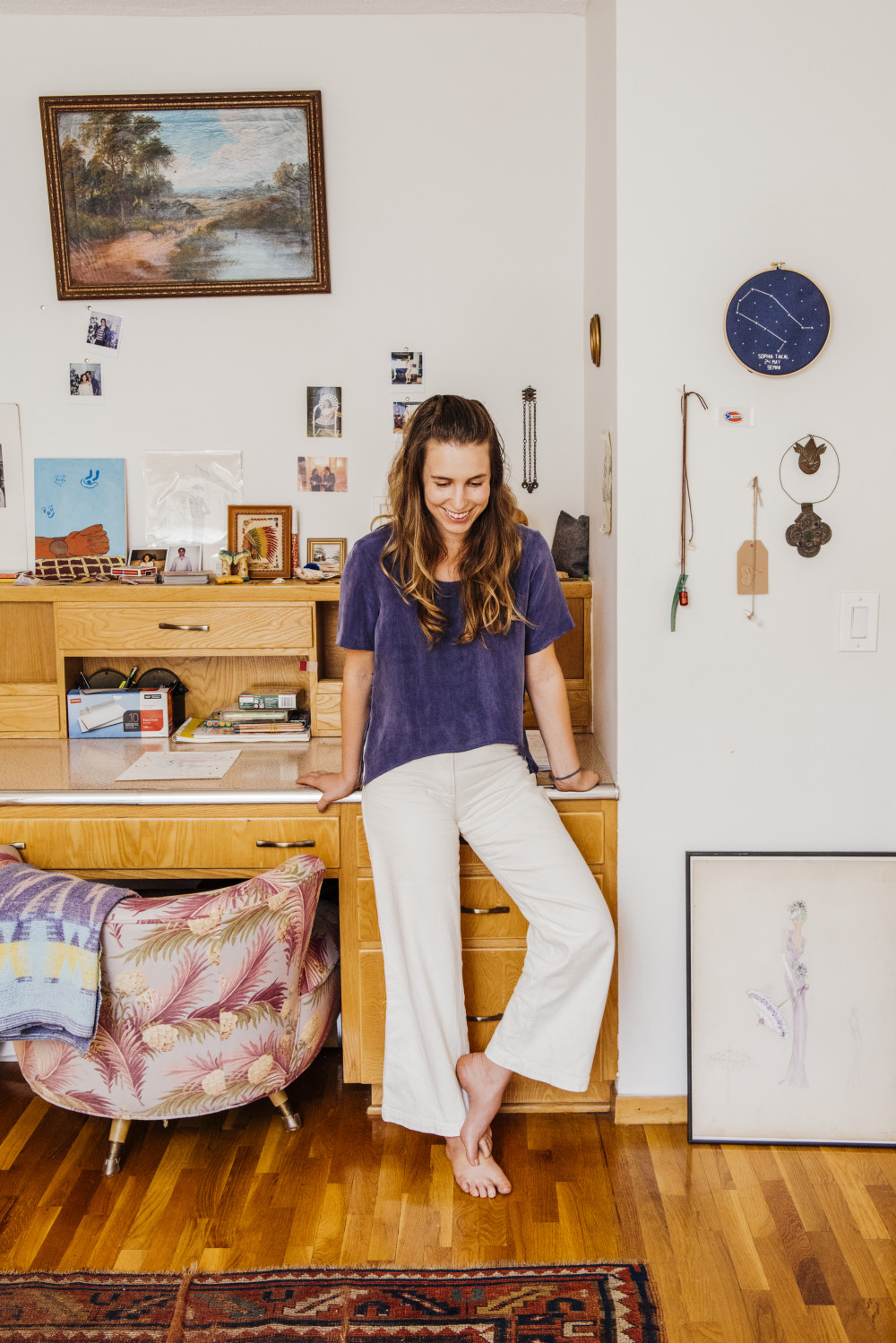 I was lucky that when we got here we pitched an idea for a TV show and got paid to write it even though it didn't end up getting made into anything. It was enough to sustain us for a while. Then my movie sold and made money, so that was also helpful for giving us a cushion to live for a few years.

You can make money in Hollywood if you make movies at the right budget. Finding the sweet spot of what's not gonna affect what's on screen but isn't so exorbitant that you won't make your money back. It’s not guaranteed, but there’s an alchemy to it. The more we do it, the more we learn about what the right budget is for the people that we're casting and for the genre. But it's hard. A lot of people I know direct commercials and direct episodes of TV. And there's a lot of people getting paid for things that never materialize.

People smoke so much weed here. My husband has these really cool Dosist pens. You breathe in and they buzz when you’ve taken in the right amount. He’s got this one called Passion that an agent once recommended at a meeting. I usually get sleepy when I smoke, but this is super fun and exciting. So that’s what I’m into right now.

I get so freaked out on edibles. I fucked up my last birthday because I ate a ton of mushroom chocolates and then accidentally ate some weed chocolates thinking they were mushroom chocolates. I got so fucked up. And the time before that I was high like 24 hours later and looking for my car after seeing We Need to Talk About Kevin—it was like a real-life Dude, Where’s My Car? That wasn’t fun, either. I don’t think I’m ever gonna eat weed again. I think I’m good.

I'm also really into CBD. I get really bad back spasms when I fly so I take CBD and that helps a lot. There was a really weird period of my life about six months ago where I was having these crazy breathing problems, and it turns out they were anxiety attacks. And then I got this CBD spray and it helped me from having anxiety attacks. I was too afraid to smoke anything because I thought there was something wrong with my lungs—I thought I had a blood clot—so that's when edibles and sprays and drops are really helpful, when you're, like, spinning out and think that you're dying. They are selling it at the pharmacy in, like, Bergen County, New Jersey, so that's how you know that it's really spreading like wildfire. 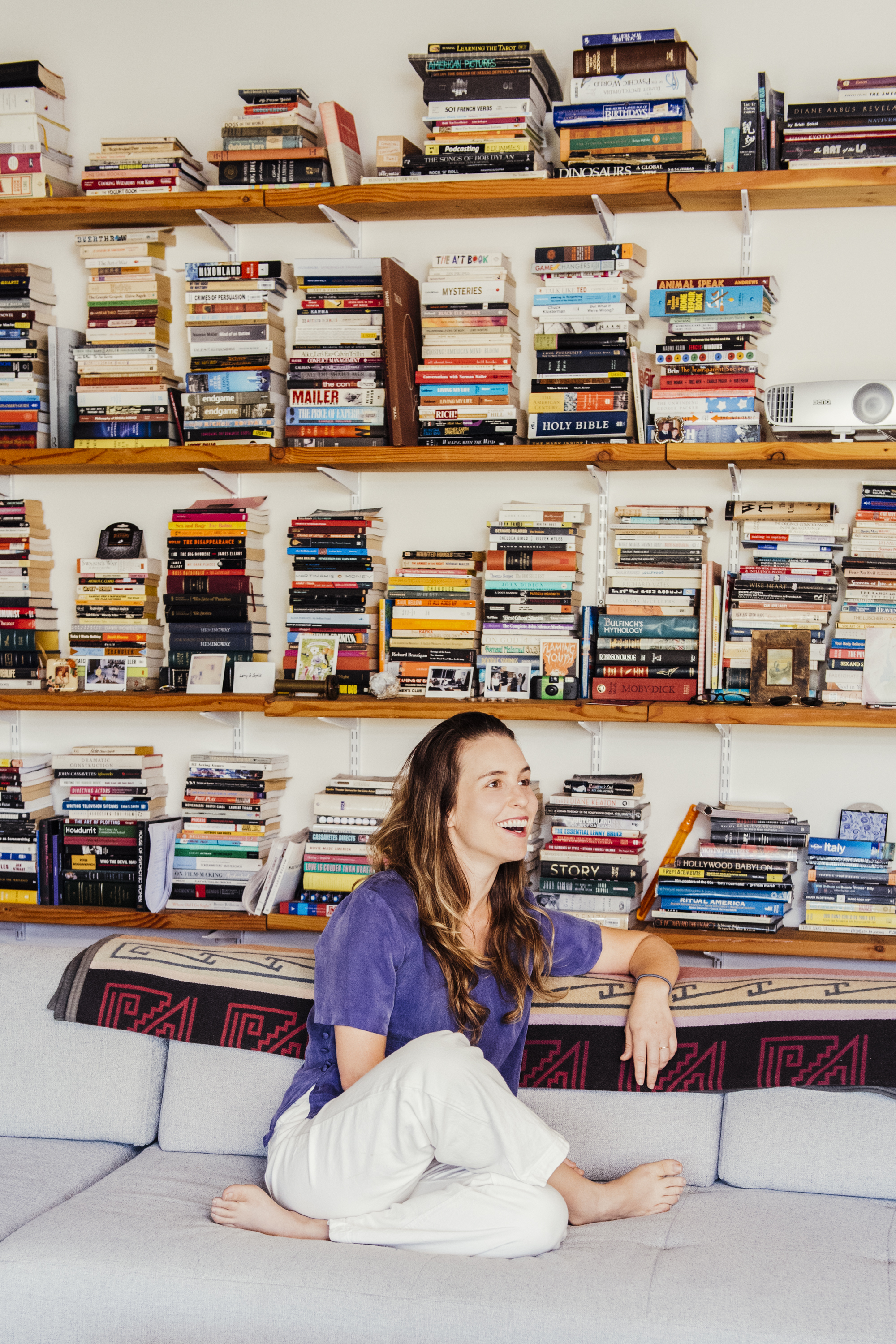 Instead of being so focused on, say, who should be president every four years, remember that every day you have an opportunity to do something.

I think a big takeaway for me after Donald Trump was elected was to get more involved in my community. Instead of being so focused on, say, who should be president every four years, remember that every day you have an opportunity to do something. I guess it could be perceived as political, but it could just be community building.

For instance, my friend Lanie and I throw a monthly community birthday at the local public library for anyone born that month. So if a kid doesn't get to have a birthday party, because they don’t have the space to do it or really for any reason, they can always feel like they're being celebrated. It’s been a really fun thing to do in the neighborhood.

I randomly saw someone tweet a suggestion to do that from an old 1970s library pamphlet, so I called up my local branch and asked if I could start doing them and they said yes. It was a really cool thing to just be like, “Can I do this?” and for them to be totally open to it. We’ve been doing it for over a year now.

If you’re not working, the actual day-to-day life of a filmmaker gives you a lot of free time. When you're in the middle of making a movie, it's all consuming, but I've been trying to make this new movie for like a year and a half. It just takes forever if you're not paying for it yourself or doing it with your friends. Having these other things to focus on is really personally helpful, too, so I don't just obsess over myself. Even though I want to make art and communicate with people, there's something very self-absorbed about the process of filmmaking. I feel like it's really important to fill the day with less self-absorbed endeavors. 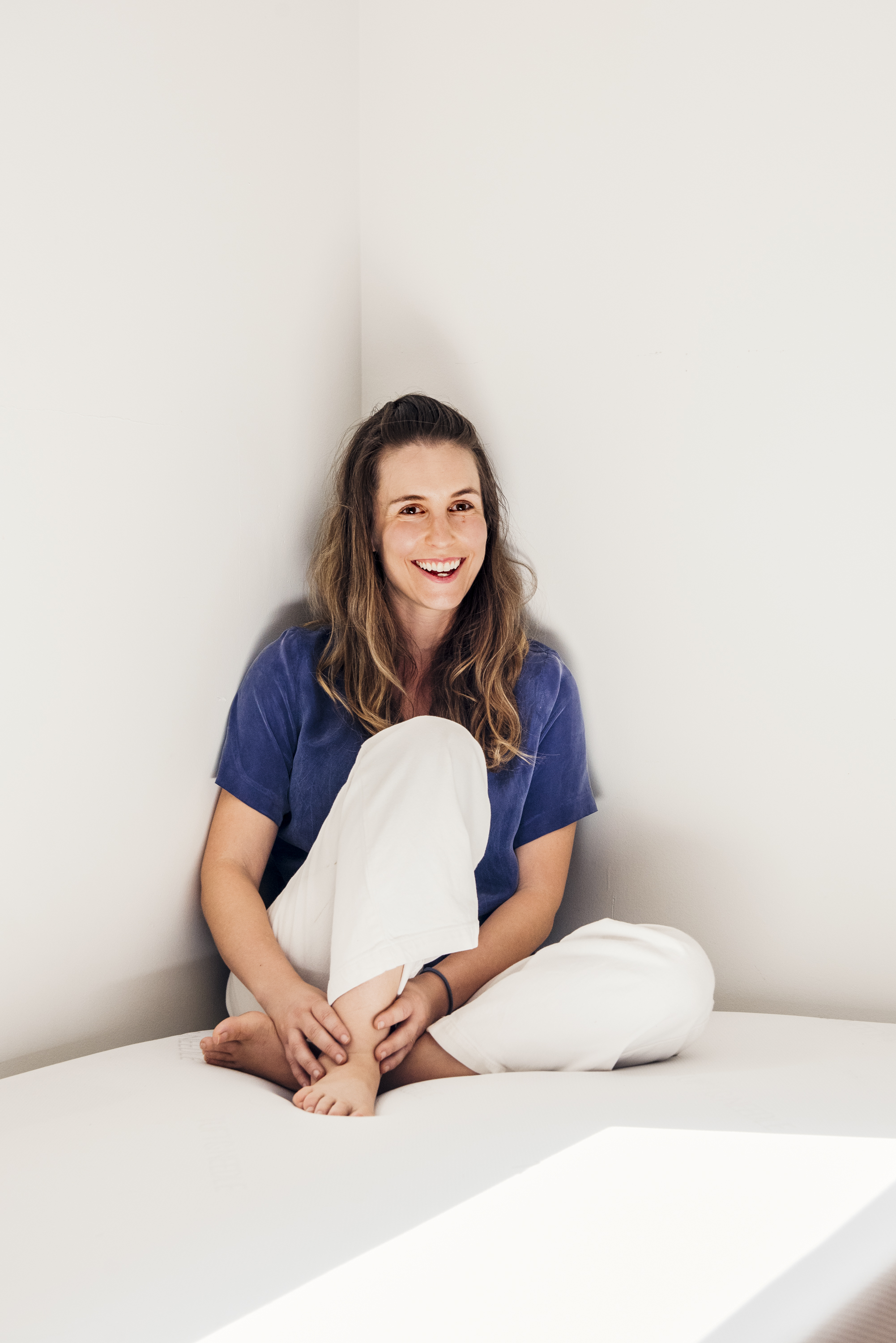 This conversation has been edited and condensed for clarity. Sophia Takal photographed by Brian Guido at her home in Lost Angeles. 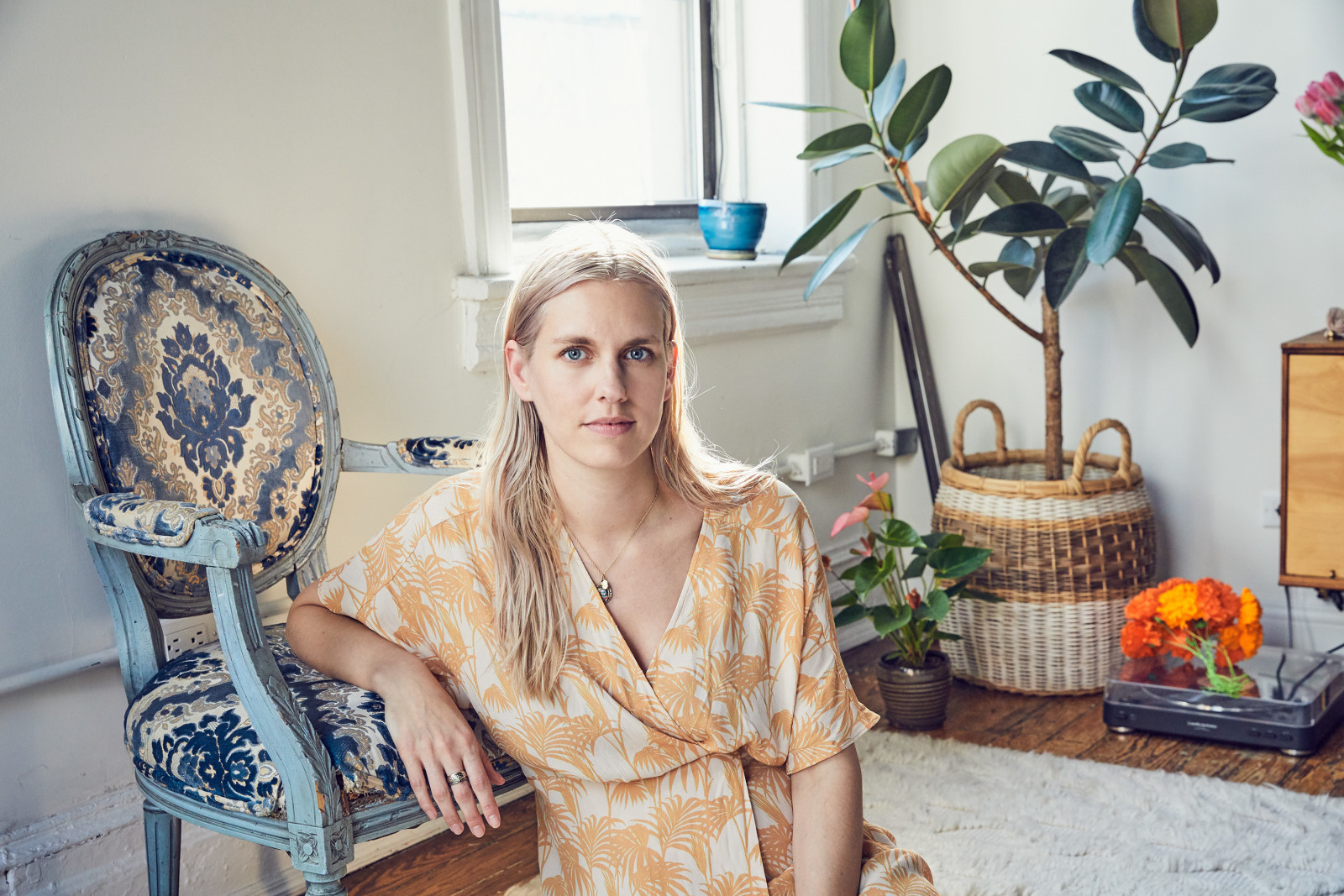