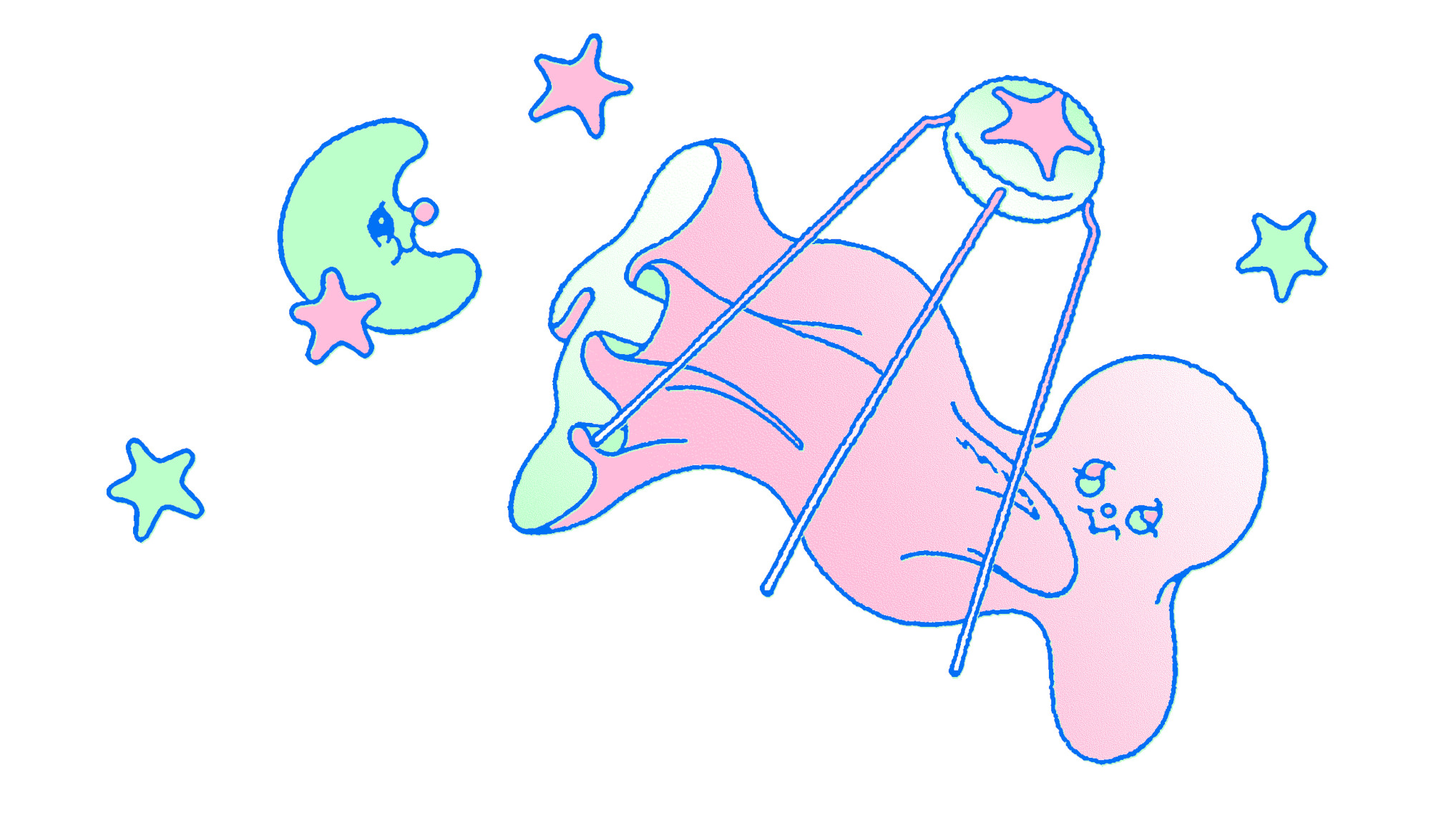 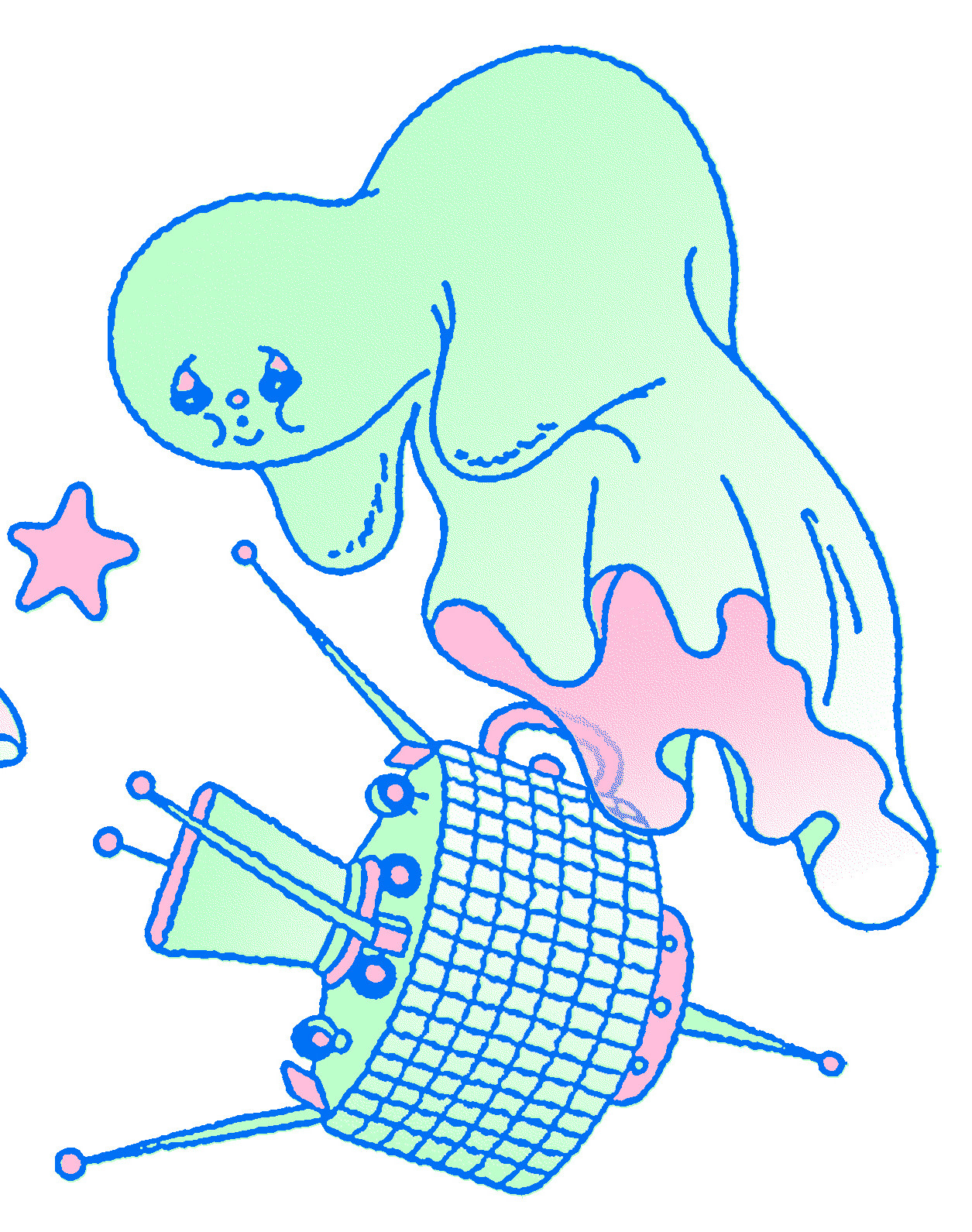 Ghosts of the Machines

In space, what is dead is never gone.

This piece first appeared in Volume Six of our magazine. If you like it, you’ll probably like the whole issue.

My baby only recently grasped the concept of object permanence. Before this, anything out of her line of sight ceased to exist: her favorite rattle, her own hand, me. What is lost is lost forever, she seemed to say, although this didn’t hurt her; she didn’t know what it was to yearn. She lived in her own world, one in which she was everything, and everything was her. If I had stepped out of her life in those early days, there would be no spectral shape of the woman who carried her, birthed her, kept her alive. The parenting books suggested rubbing your scent on a piece of cloth or a stuffed animal, but my baby didn’t give two shits.

Time has changed this. Object permanence starts developing around four months and is fully integrated into a baby's psychology by age two. We never lose this capacity: we might become forgetful, egocentric, but there is the bowl, the cup, the spoon. Even if we forget their name, or their purpose, we don’t deny their existence.

Object permanence implies that a thing could exist in perpetuity, and yet we know this is a lie. Nothing lasts forever, not the bowl, or the cup, or the spoon. Not the rattle, not her hand, not me. What I feel for this baby is the closest I’ve come to understanding the divine, but I know even that will go when I do. A slow vanishing awaits all of us, if we’re lucky. The baby forgets again, is delighted when I reappear. I try to cement myself in her consciousness. I’m trying, in my own stubborn way, to obtain permanence.

Earlier this year, an amateur radio operator in Canada caught the faint song of a ghost satellite. You can hear it on YouTube: the pitched hum of a radio dial between stations, an eerie, slightly grating ululation. The noise is insistent, trilling. It makes my cat’s ears flatten against his head.

This particular satellite, known as LES-5, was launched in 1967 by a research lab out of MIT. It was decommissioned in 1972. It should be silent. When a satellite has completed its objective, or when the technology has been outpaced, it is “sent to its death” either by gradually lowering its orbit until it burns up on reentering the atmosphere, or by being deliberately sunk in the Spacecraft Cemetery, an empty, untraveled stretch of the Pacific southeast of New Zealand also known as the South Pacific Ocean Uninhabited Area that is home to more than 250 spacecraft.

These maneuvers are intended to reduce the risk of space junk. Humans like making garbage; we’ve gummed up our land and our oceans, so it's little wonder that we’re cluttering up space, too. In the parlance of Earth, space was “clean” until 1957. It wasn't, of course. Space teemed with debris, as space always has—planet dust and the forgotten light of dying stars, meteors hurtling calmly through the darkness—but we didn't start junking it up until we began visiting. The first man-made object in space was Sputnik 1. 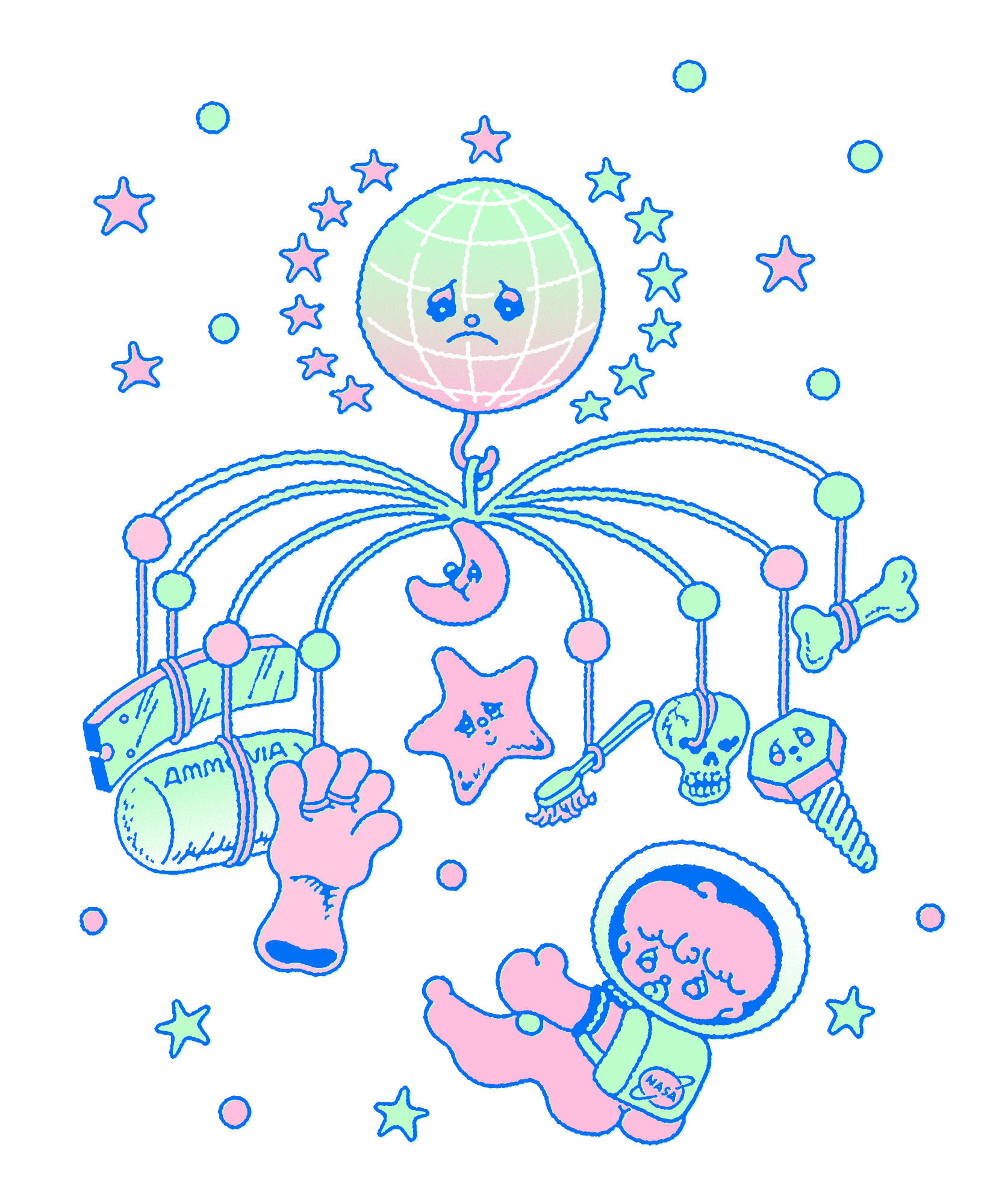 A short list of what's currently hanging out up there: human urine, human feces, human bones. A toothbrush, a camera, a briefcase. Flecks of paint and hunks of metal. Most space junk is accidental. Astronauts aren’t unthinkingly tossing their Solo cups out the window, but once it’s there, it’s there for good.

It’s also becoming a threat: researchers are currently testing everything from lasers to space harpoons to figure out how to minimize the potential of collisions between space junk and spacecraft—or, worse, between space junk and us, here on Earth. In 2009, two satellites collided while traveling at a speed of 42,000 km per hour and created thousands of pieces of debris. This was the first crash of its kind, but it won’t be the last. Junk persists.

So even in space, garbage is a problem. Objects lose their utility, or are outpaced by something newer, flashier. That's what happens to satellites. There are an estimated 2,900 “dead” satellites hovering above us, and those (like LES-5) that are in geostationary orbit—the highest orbits satellites use, about 36,000 km above Earth’s surface—would require too much fuel to be safely brought back. Instead, these satellites are told to take themselves to the graveyard orbit.

Graveyard orbits are at least 300 km above any other known spacecraft, too far away to pose a threat of collision—a sort of forgetting zone. The satellites are then instructed to “passivate”: they drain themselves of excess energy, destroy any remaining explosives, and, finally, shut themselves off. It’s a gentle death. There, the satellites can orbit indefinitely, forever—or whatever forever means in space, where there is no one to catalog time.

These satellites are ostensibly dead, and yet. Every now and then, someone—usually a hobbyist, scrolling the night sky—catches one singing. LES-5 hadn’t been heard from in 48 years before a fragment of its song snagged on an antenna as it cartwheeled in the dark above British Columbia. There’s Transit 5B-5, a nuclear satnav craft, launched in 1965 and no longer under the control of its operators, still somersaulting through space, bullishly broadcasting. LES-1 is a 1965 Air Force communications satellite that never reached its orbit and disappeared for 40 years before independently resuming transmissions in 2012. There’s no official explanation for why this happens; some scientists suggest that certain solar-powered satellites pick up enough juice to reboot as they tumble through the starlight. No one thinks about them. No one is calling them home. These ghosts just aren’t ready to go. 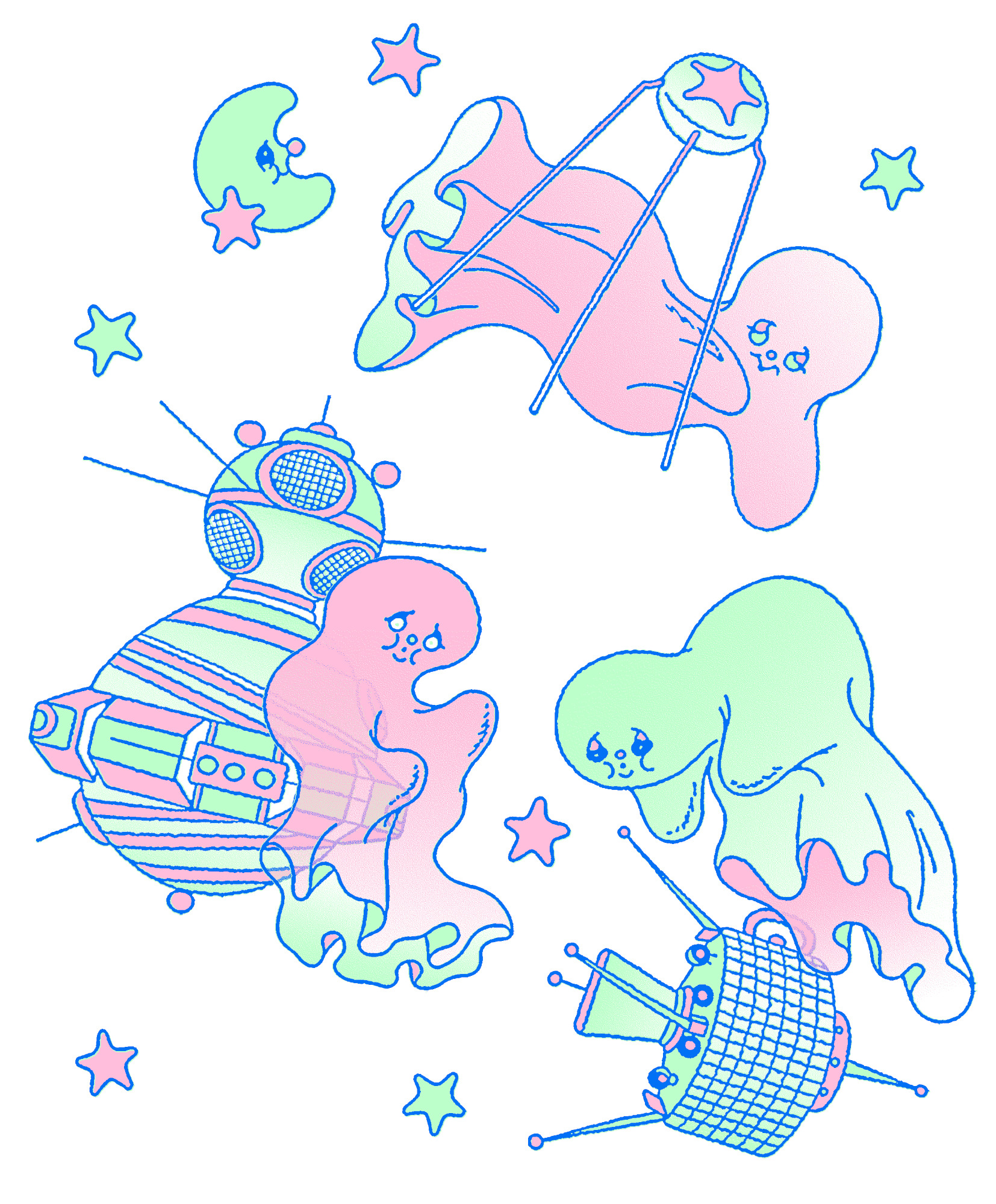 When an object ceases to be useful here on Earth, we give it away: recycle it, repurpose it, leave it on the curb, pass it to a friend, throw it in the trash. It can take a piece of plastic up to 1,000 years to decompose, even subject to the forces of Earth—water, wind, bacteria. These forces don’t exist in space: there are solar flares, geomagnetic surges, the lightning-strike possibility of a collision with another piece of space junk, but even under these conditions, ghost satellites are expected to continue their procession in graveyard orbit for millions of years.

I've been thinking about these satellites since I learned about them, about how an object doesn't stop being merely because we've stopped using it. Ghost satellites, graveyard orbits—even our language tries to erase them. We told those satellites we were finished with them, but they’ve resisted our directive. They nag at us, a reminder. We have words like forever, words like endless, words like permanence, but we can’t apply them to the things we want most: love, and life, my daughter’s small hand tight around my finger as she nurses, saying stay, stay.

I watch the baby now. She grunts “egh, egh, egh”; pitches herself at what we’ve pulled out of reach; cries when we leave the room; jolts in surprise and delight when we duck out from behind the door. I think that there is not a world for her without me; I am her earth, her pivot point, her orbit. Her world is both infinitesimal and infinite. I know that it is loss that makes the having worth it; I know too that I would trade all this life for a graveyard orbit of my own, an endless circling above her. As she sleeps, I lie in bed and listen for the ghosts as they slip through space, singing their eternal, stubborn existence. 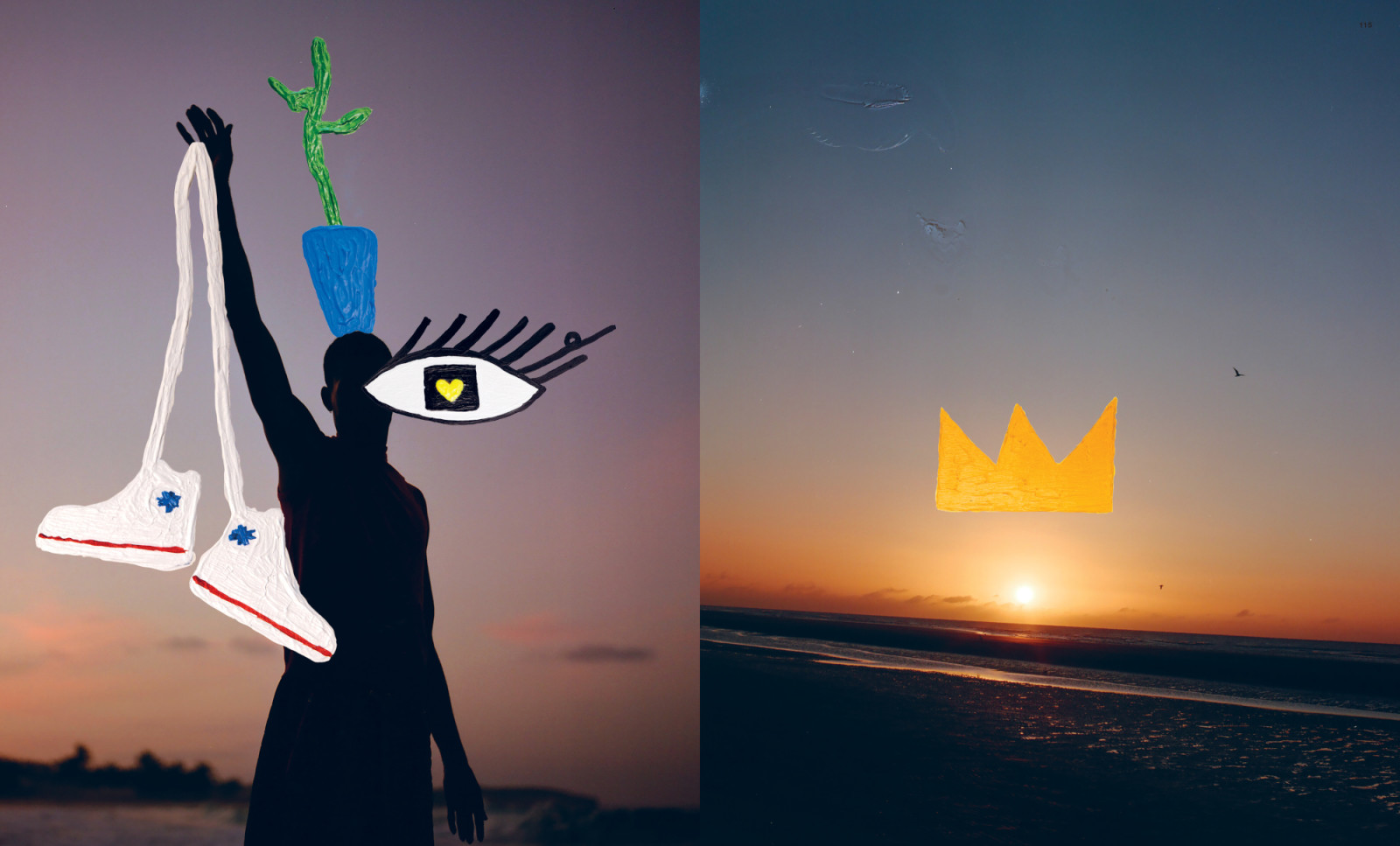