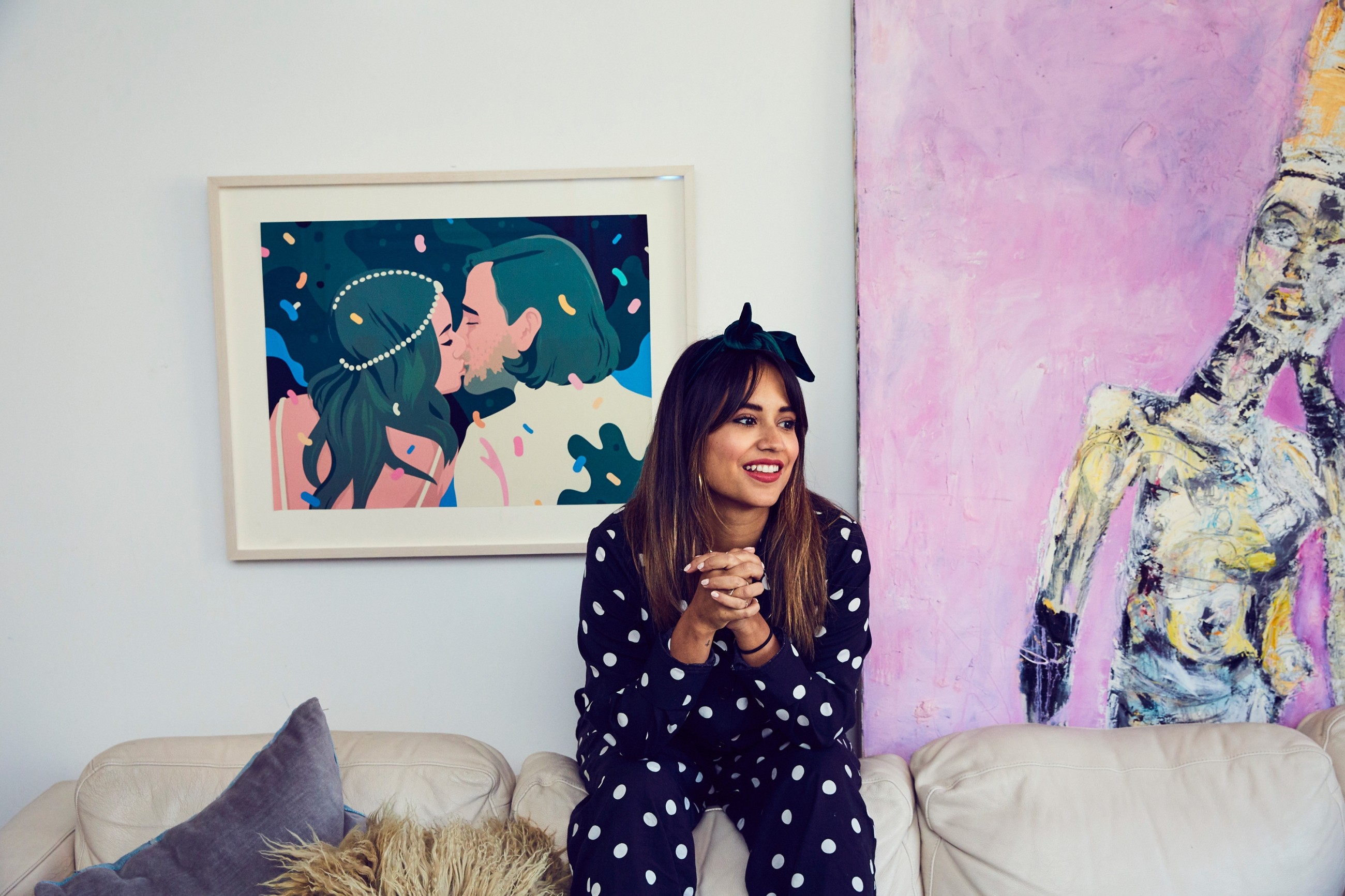 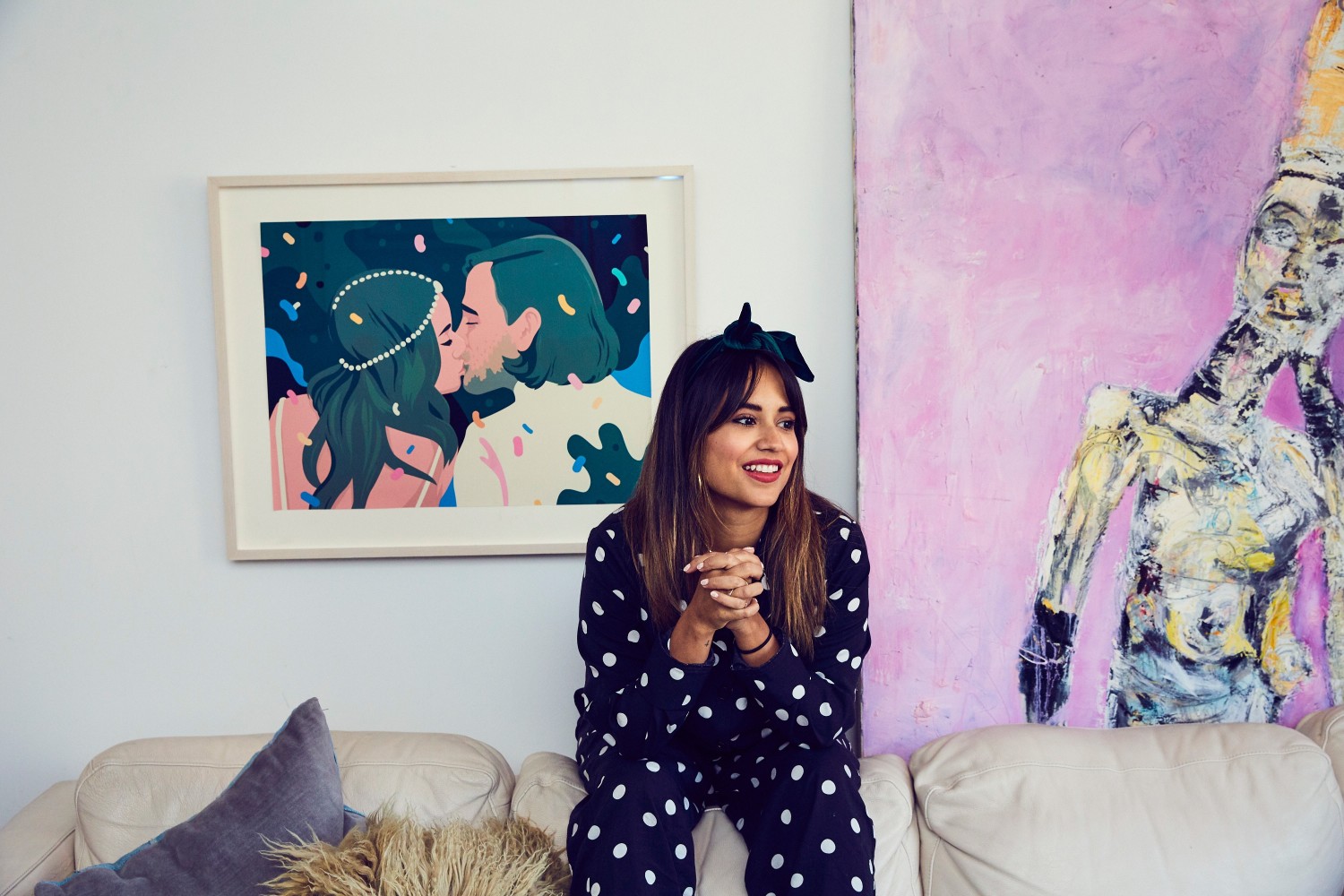 The founder of Chillhouse on translating Instagram into real life, self-care in small business, and how to work with your partner without killing each other.

I’m the owner of Chillhouse, a café and spa on the Lower East Side. My husband, Adam, and I opened it last March, but we came up with the idea about a year before that. We were trying to get massages one day and there weren’t really any options that spoke to us—everything was either super expensive or almost unethical in how cheap it was. We realized there was a void, at least in Manhattan, in approachably priced massages.

We started brainstorming how to create a cool, new, spa-like environment or place of relaxation, and came up with this trifecta of a wellness café, nail art studio, and a massage boutique. I think we had really good timing in opening when we did. The last year has been exhausting for a lot of people. It wasn't intentional; we just happened to realize what was needed. I think we saw the wellness space as a little too holistic, and almost a little too spiritual. We wanted to make it much more—not necessarily mainstream—but approachable and easy for anyone to digest. I recently had my friend who works in sanitation come get a manicure and a matcha. We want Chillhouse to be a place that is accessible to all. I think the people that are already into wellness already know where to go. This is just something a little more for everyone.

My day-to-day kind of runs the gamut, anything from dealing with operations on site to thinking about what the future holds for the company to hiring and decor. Like any small business owner, I kind of have my hands in a little bit of everything.

We just launched our first products in store: Chill Blends. They're adaptogen powder blends that people can mix up and consume at home, and we'll be going national with those in the next couple of months. From there, we'll see. I can't really divulge too much, but we'll be launching other products that will essentially bring the Chillhouse experience into your home.

The last year has been exhausting for a lot of people. 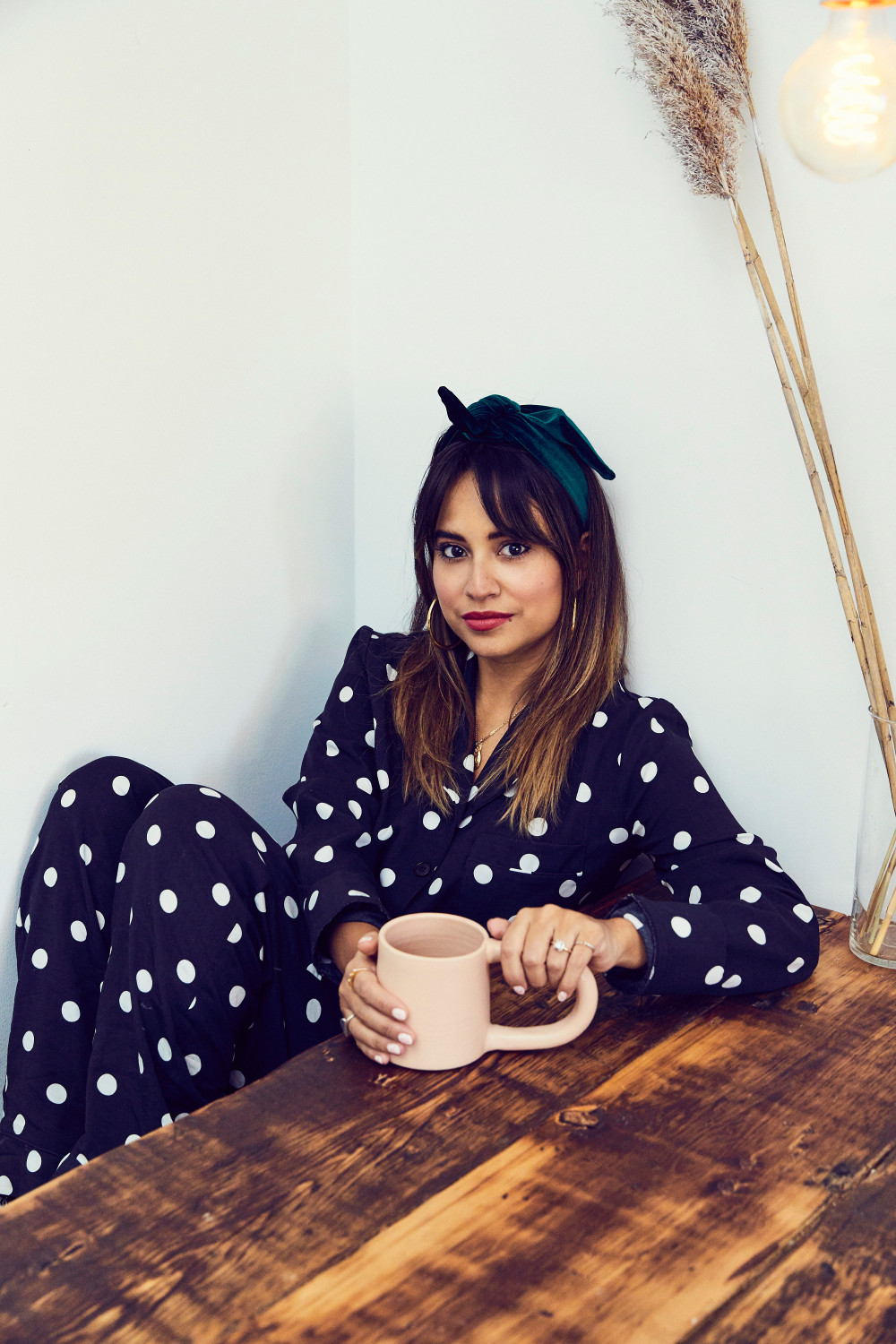 My husband and I met about 10 years ago, when we were both kids, idiot 20-somethings, working in nightlife. I was a bottle waitress, he was a promoter. I have so many stories from that time. One of the most ridiculous was at a place called Embassy—it was only open a few months. I had to wait on a famous rapper and his crew and long story short, they weren't there to play nice. A major fight broke out, his security cracked a bottle of Grey Goose over another man's head and ended up cutting a poor woman. The place looked like a bloodbath. That was my first night doing bottle service. Should've turned me off for life. But for the most part, I have some pretty fond memories of it. It was a good time in my life full of booze, drugs, and drama.

I've never launched anything that has the potential to be a global brand. I've never even worked for a big brand before. I've never worked in a corporate environment in my entire life.

My husband and I have been working together for the last couple of years in a few different capacities. He owns bars, and I’m a partner in those as well. This is the most intense business we've opened together. It's a lot of learning how to deal with one another, learning each other's strengths and weaknesses, and then saying, "Okay, I will take this on, because clearly I'm better at this."

The past couple of businesses that we've done together have aided in shaping how we're actually forming this one. Not to say we're not passionate about everything we've done in the past, but this is the one that I think could really impact the rest of our lives. So, we're grateful, I guess, that we've learned so much in the past few years about one another, and that we're doing well. I think my husband and I are also good about knowing when we're just tired and don't want to talk about business. And if one of us is having one of those evenings where we're in a creative or business mindset and can't seem to shut off, the other will politely be like, "Well, listen, no. Not tonight." 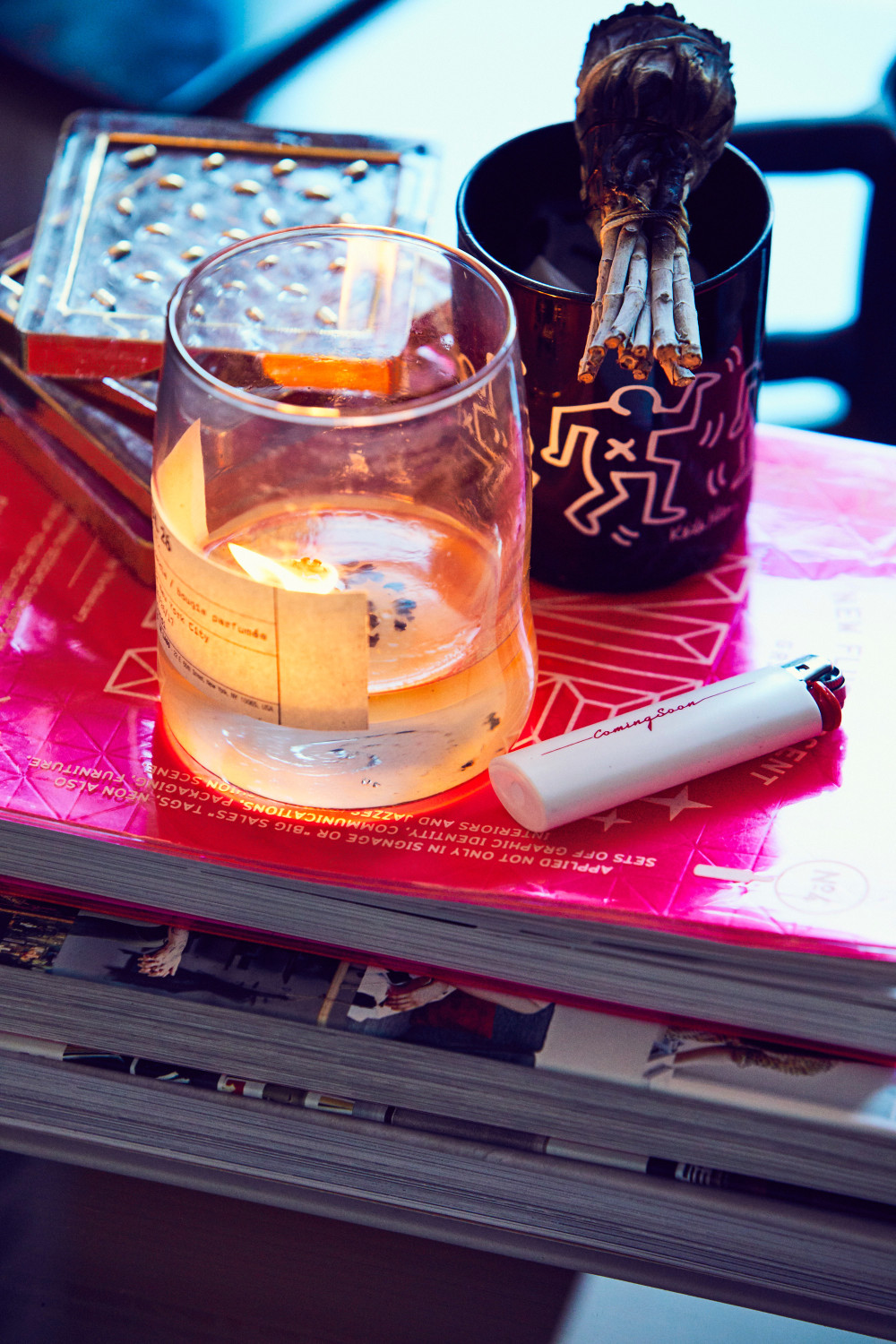 I think Chillhouse is the strongest brand that I've ever created. It’s the one that people have really been the most receptive to. So I have to give it my all and think in a way I've never thought before. It’s kind of scary. I mean, you open up a space and you don't know, necessarily, what's going to happen. You go into it with the idea that, yeah, this could be something big, but let's take it one step at a time. Then one thing happens, and then the next thing, and then you're kind of like, Okay, this is serious.

We're working with big companies now. We have the attention of really important VCs and businesses. So, what am I bringing to the table, because I've never done this before? I've never launched anything that has the potential to be a global brand. I've never even worked for a big brand before. I've never worked in a corporate environment in my entire life. I've only ever had one salary job. And I learned so much from it, but it was also a small team. That’s the only culture I've ever known. That and nightlife, and other little gigs here and there where I learned a lot about different industries. But it's a little scary, launching a business that I hope to be a 50, 100, 200 person company one day when you've never ever even been in that environment. It’s terrifying but also exciting.

Our community is young. They're fun. They're obsessed with Instagram. They're obsessed with their own personal aesthetics, with taking care of themselves and sharing it, which is great. It's what you want in your audience. But they're also very thoughtful and very opinionated, they have a lot of expectations, and they gravitate to really strong brands. All that pushes you to be better at what you do. People expect a lot, especially when you put forward this really pretty picture of what Chillhouse looks like on your Instagram. If it doesn't reflect that, people are gonna be disappointed. I had a Yelp review once that broke my heart, because it was like, "I've been following Chillhouse for so many months now, and it let me down a little bit." Because it was a little messy that day. Our plants had died. All these little things add up, right? And then you're like, "Fuck!" I got in there the second she wrote that review and I was like, "I'm fixing everything!" 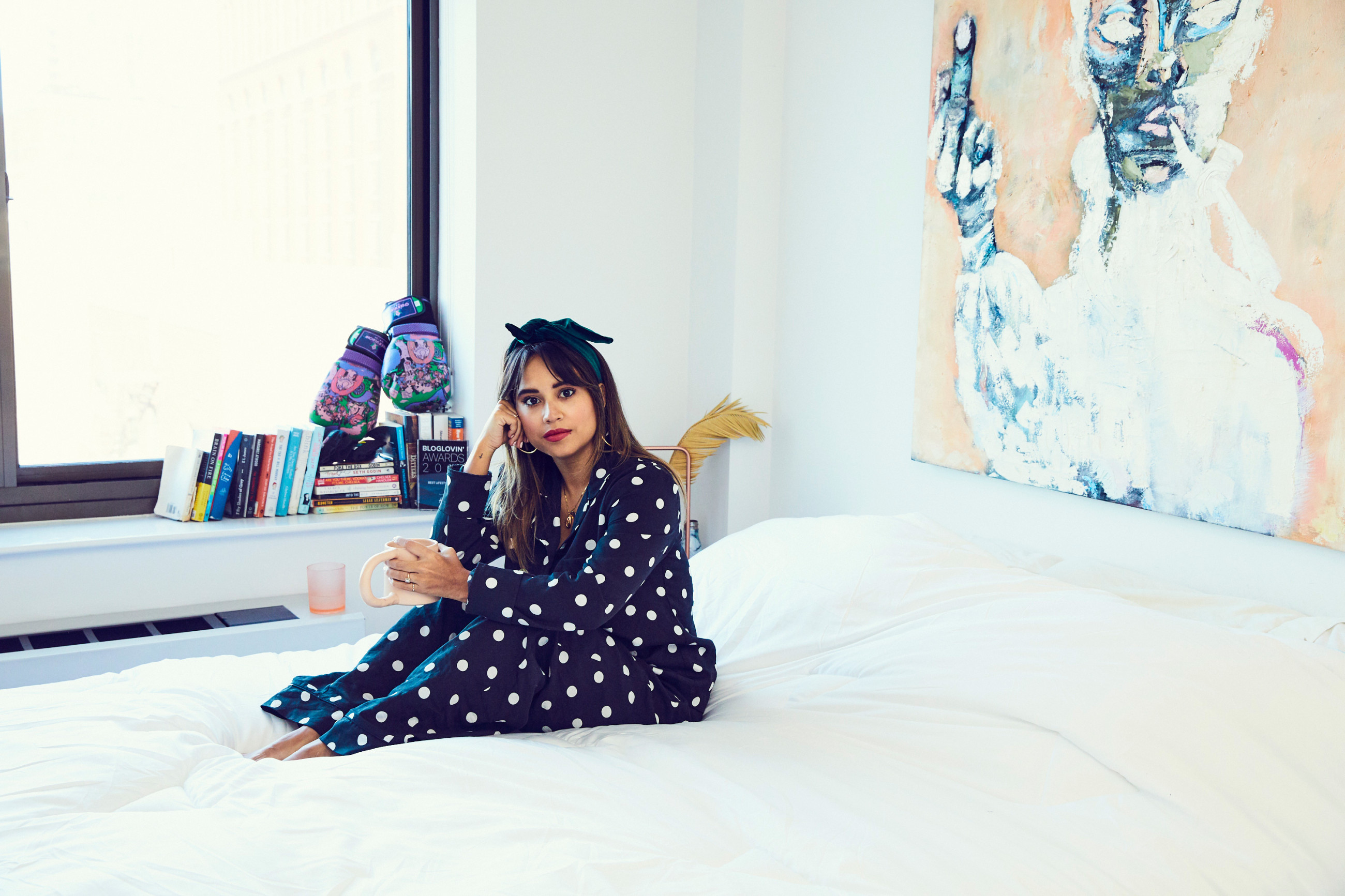 I grew up in Queens, but I moved around a lot. I'm Colombian. My family migrated to Jackson Heights. My mom’s an esthetician and owns a medi-spa called Mary's Cosmetology. It's on Roosevelt Avenue. She did everything on her own. As someone who doesn't speak the language, it can be hard for her to communicate, but she's done really well for herself despite that restriction. It's funny, it's a little like I’m following in her footsteps, but modernizing it. There are certain things we have in common, but businesses today are run so differently than what your “normal” mom and pop shop is.

I learned a lot of things from my mom, though. Mainly that you need to be tenacious and willing to work 24/7. My mother's first time taking three days off in years was recently, during Christmas. I think watching her be so hands-on in every area of the business made me hyper aware of the realities of being a small business owner, particularly a shop. It can be a lot on your body, and even more on your soul. Because of that, it's important to nurture yourself and not burn out. I know from watching her that I want to make sure I'm taking care of myself throughout the process. She's always been pretty good at that, with the exception of taking more vacations.

Decompressing isn’t easy. I interview people for Chillhouse and I always find myself asking that question, too. I don't know. How do you decompress? You probably put on Netflix. You probably try to put your phone on silent and not look at it. Like any startup entrepreneur, you're so obsessed with work that it's really hard to put your phone down, and be like, "I'm not gonna think about that tonight." I’m still kind of working through what that looks like.

Being in the wellness and relaxation space, like Chillhouse itself, helps. If I owned something else, I'd be even more stressed out. When the space is running smoothly, when it's clean, when I am sitting down getting a manicure and all these things are floating around me and it's all working magically, then I'm like, "This is amazing." I find a lot of solace in Chillhouse and hanging out there. It’s not as peaceful for me as it is for someone else, of course.

Being a small business owner can be a lot on your body, and even more on your soul. 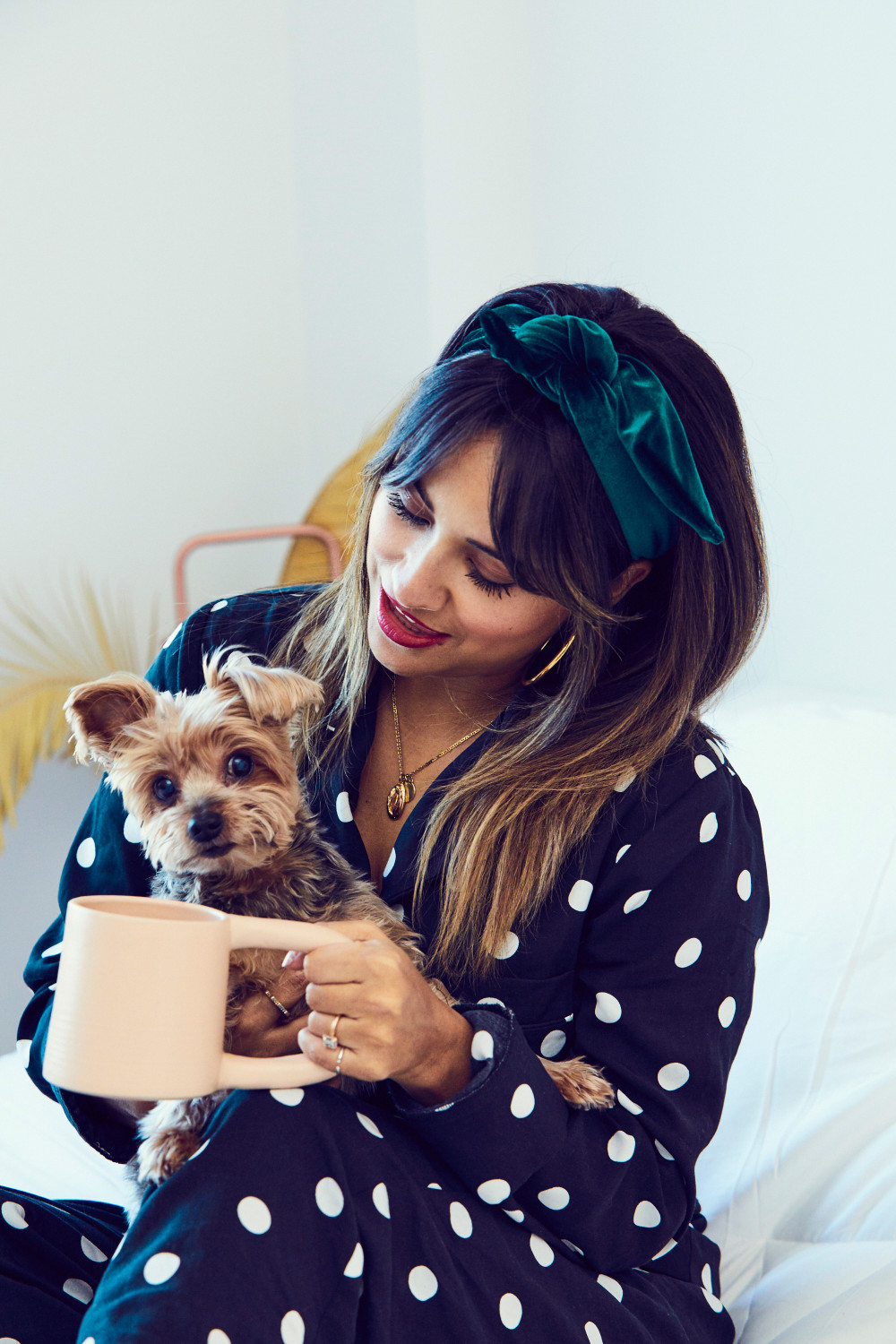 I don’t smoke weed that much anymore, really. I used to a lot. Every now and then my husband and I will pick it back up, but it's not often. If we're trying to detox and lay off some booze, sometimes we'll get some. But I enjoy it every now and then. If it's around, I'll be like, "Yeah, sure." It was never something that I sought out. I was always like, "Booze." Though I may have to get some this week, this month, because I'm doing a cleanse. It's a 21-day program. I'm not good at sticking to cleanses for a long time, but I enjoy doing it for a few days, at least, every now and then.

I think, for me, going away on little weekend getaways really helps a lot. I don't really like to open up my computer too much. I answer every question I need to and I do what I have to do that's urgent, that's time sensitive, but that’s kind of it. Those little mini escapes help a lot—getting away from the cold every now and then.

New York can be really depressing, especially in January and February. But every time I think about leaving the city, I fall back in love with it. I think that's the thing about New York: as much as you want to hate it, there's just nothing like it. You'd get bored if you went anywhere else. Part of me wants to live in L.A. for a couple of months, open up a business there, and then come back. We want to have kids one day, and it seems really exhausting to have a kid in Manhattan, so we'll see how it goes. We're still trying to figure it all out.

Cyndi Ramirez photographed by Meredith Jenks at her home in Manhattan. This interview has been edited and condensed for clarity. 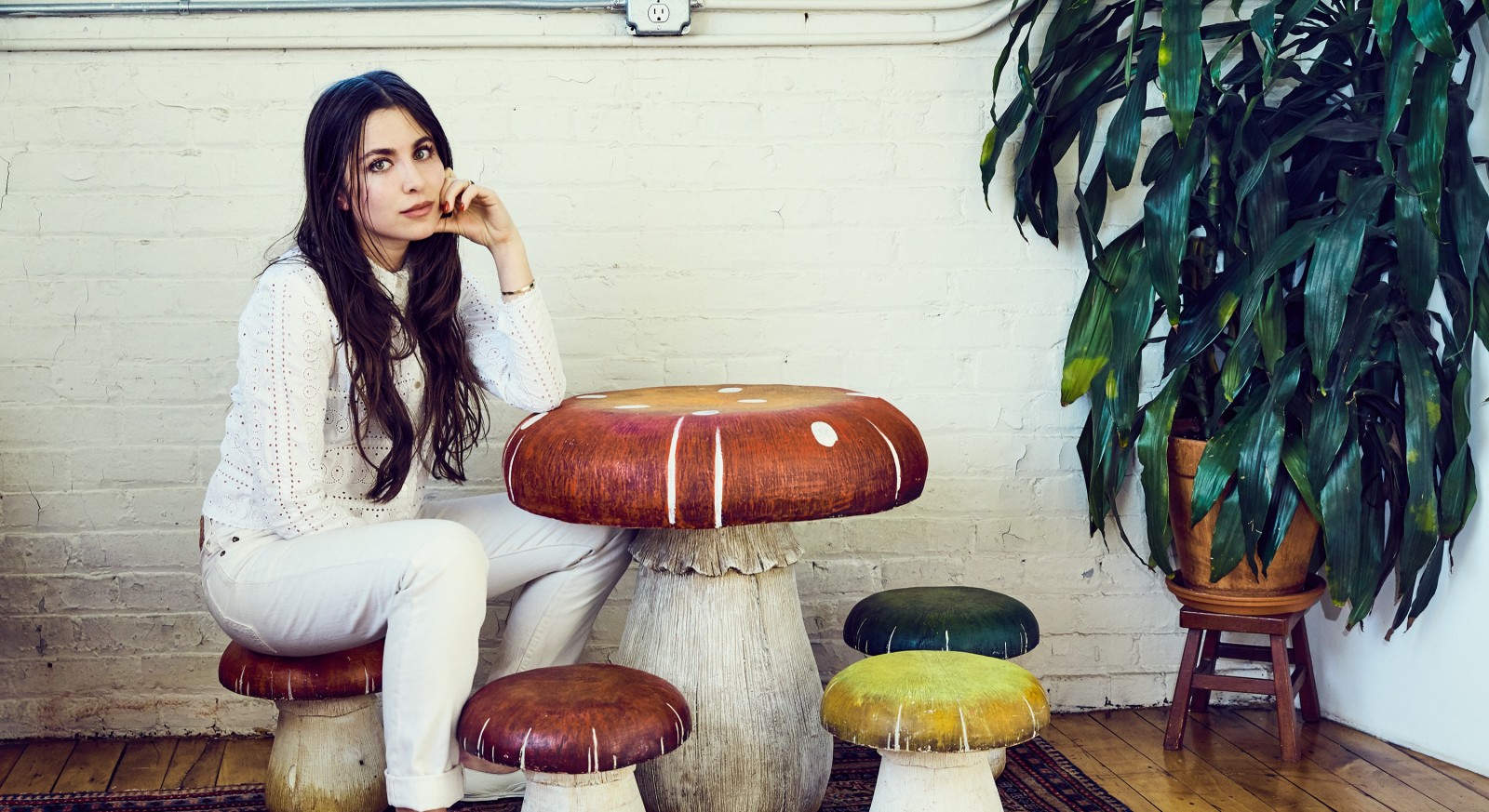