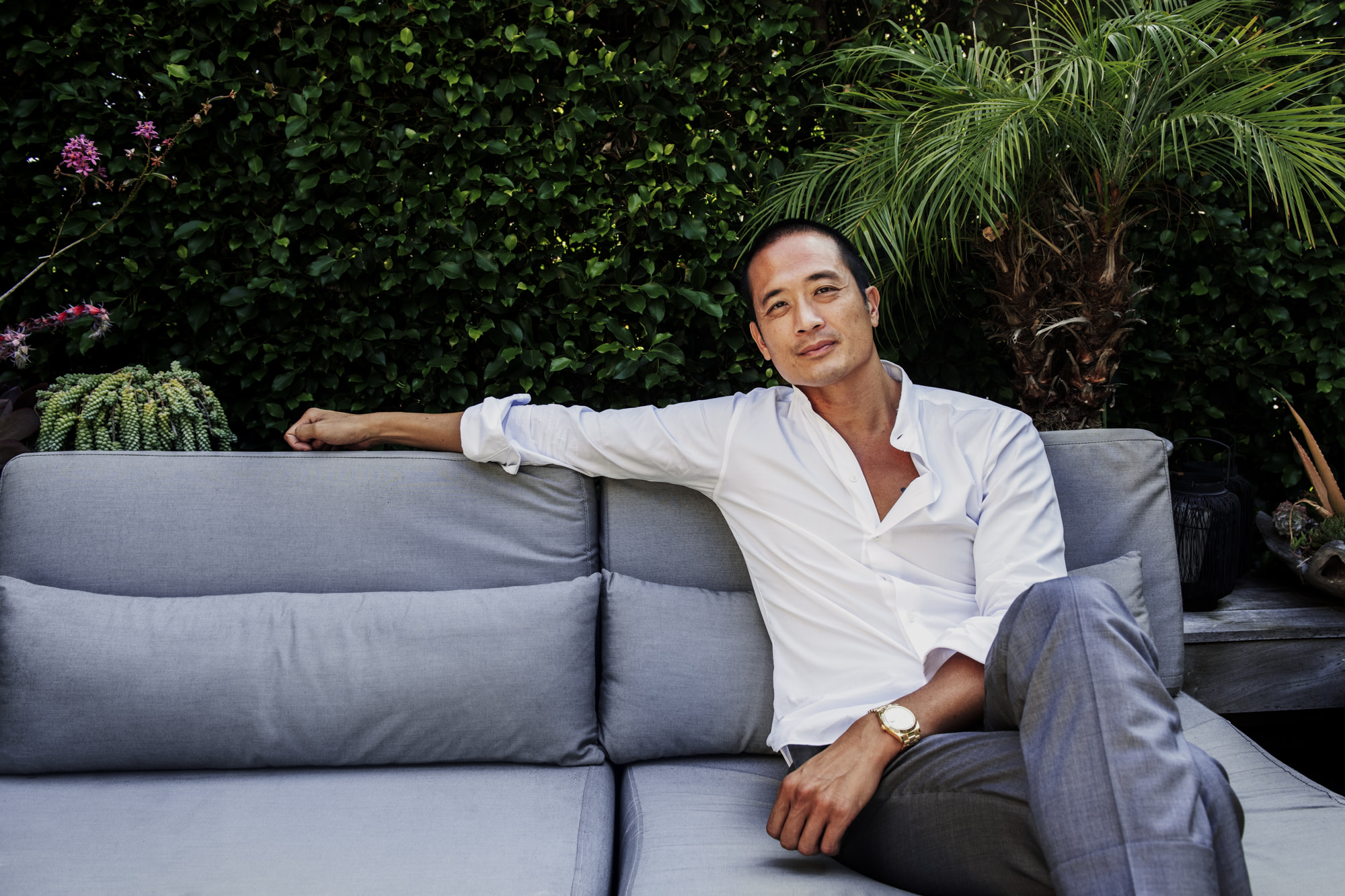 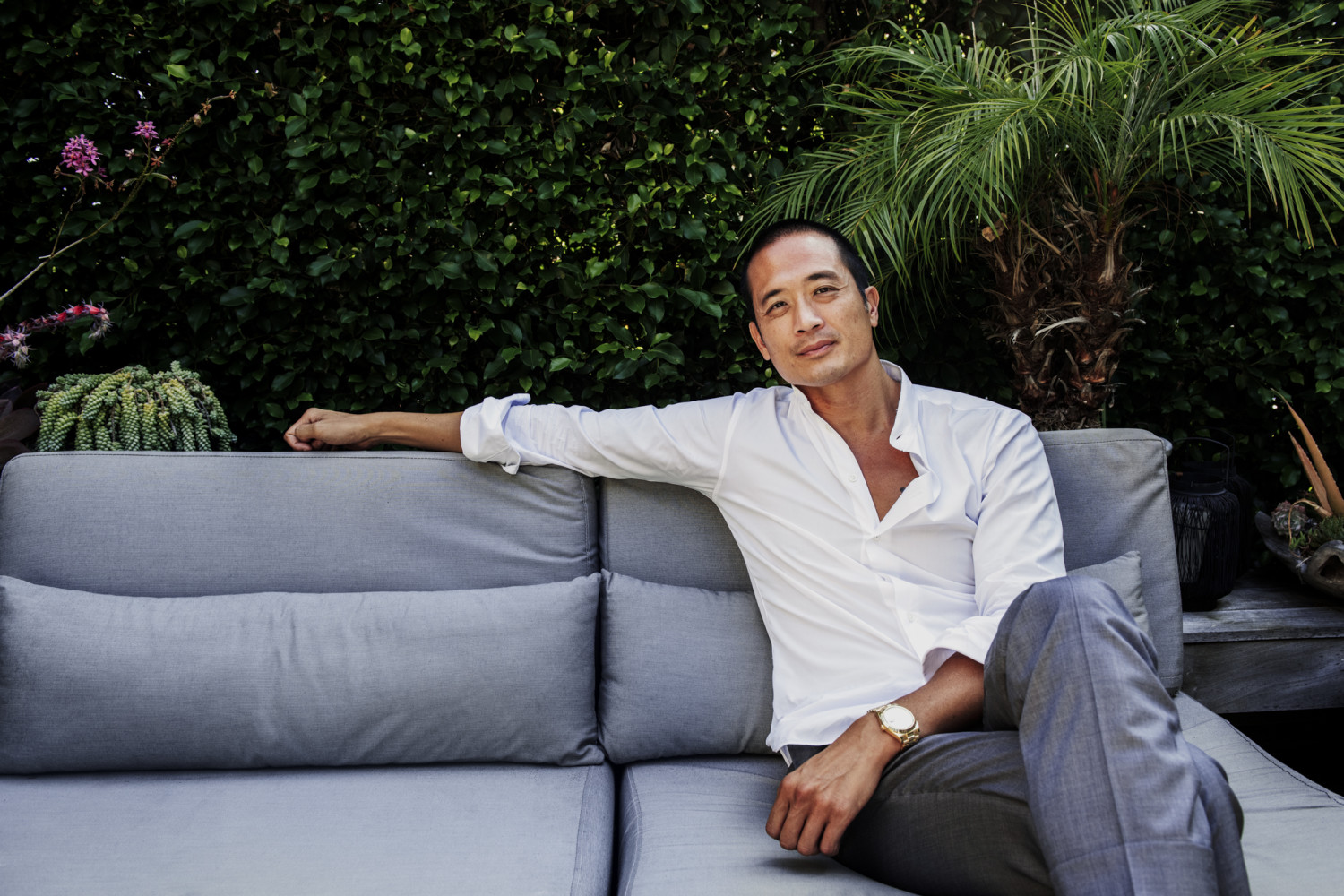 The co-founder of Beboe on going from vet school to vaporizers, Italian life, and why everyone should know what it takes to grow weed.

I grew up very poor in East L.A., in an area where everyone was either in an Asian gang or a Mexican gang. That was what growing up was about. But I never joined one because my mother would’ve killed me. She was a single parent and instilled the fear of God—and mostly her—in both my brother and me. Her rules: get good grades, go to church, become an Eagle Scout and excel in sports. Even if I wanted to join a gang, I didn’t have time to. I wrestled, did judo, and played basketball. But everyone I grew up with was in one. When I was 16, my friend was shot and killed. That kind of stuff. That said, growing up in East L.A. was wonderful. It taught me about hand work, grit, and determination.

When I was 17, I went to UC Davis to become a veterinarian. I went up there with a bunch of cowboys and didn’t realize that veterinary medicine was livestock and not for animals like dogs and cats. So after milking a couple of cows and castrating some sheep, I decided it wasn’t for me and moved down to Berkeley and studied corporate finance. 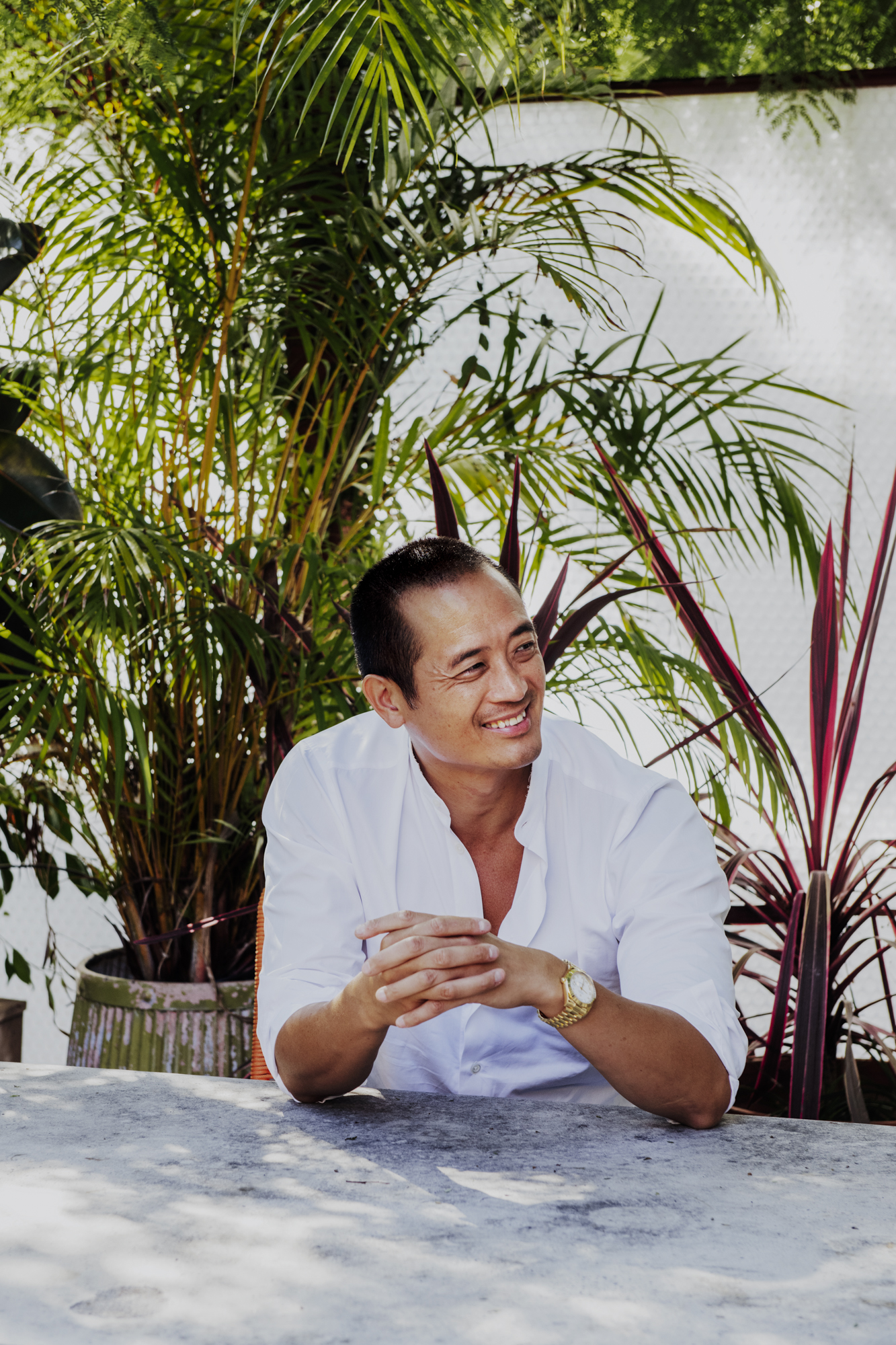 Like every good Asian kid, I decided to become an investment banker. I was on financial aid and broke, but I happened to meet a hippie in the Berkeley Hills who taught me how to grow marijuana. So I grew from 1997 to 2000 and paid my way through school and then some.

I was growing in indoor locations in the East Bay, South Bay, and throughout the Bay Area. We weren’t street dealing. Medicinal marijuana was legalized in 1996, and we started doing it in 1997. We sold it to cannabis clubs, the precursors of dispensaries. I fell in love with growing marijuana, in the same way I love gardening normal plants. But I had to stop in 2000 because I actually got a job as an investment banker in Silicon Valley. It crushed me but I realized that I needed to learn the fundamentals of business.

It was when Silicon Valley imploded in 2001 that I decided to get into fashion. I worked at brands like Theory and Diesel, and then became an executive at Dolce & Gabbana and lived in Milan for seven years before becoming the president of YOOX Net-A-Porter. 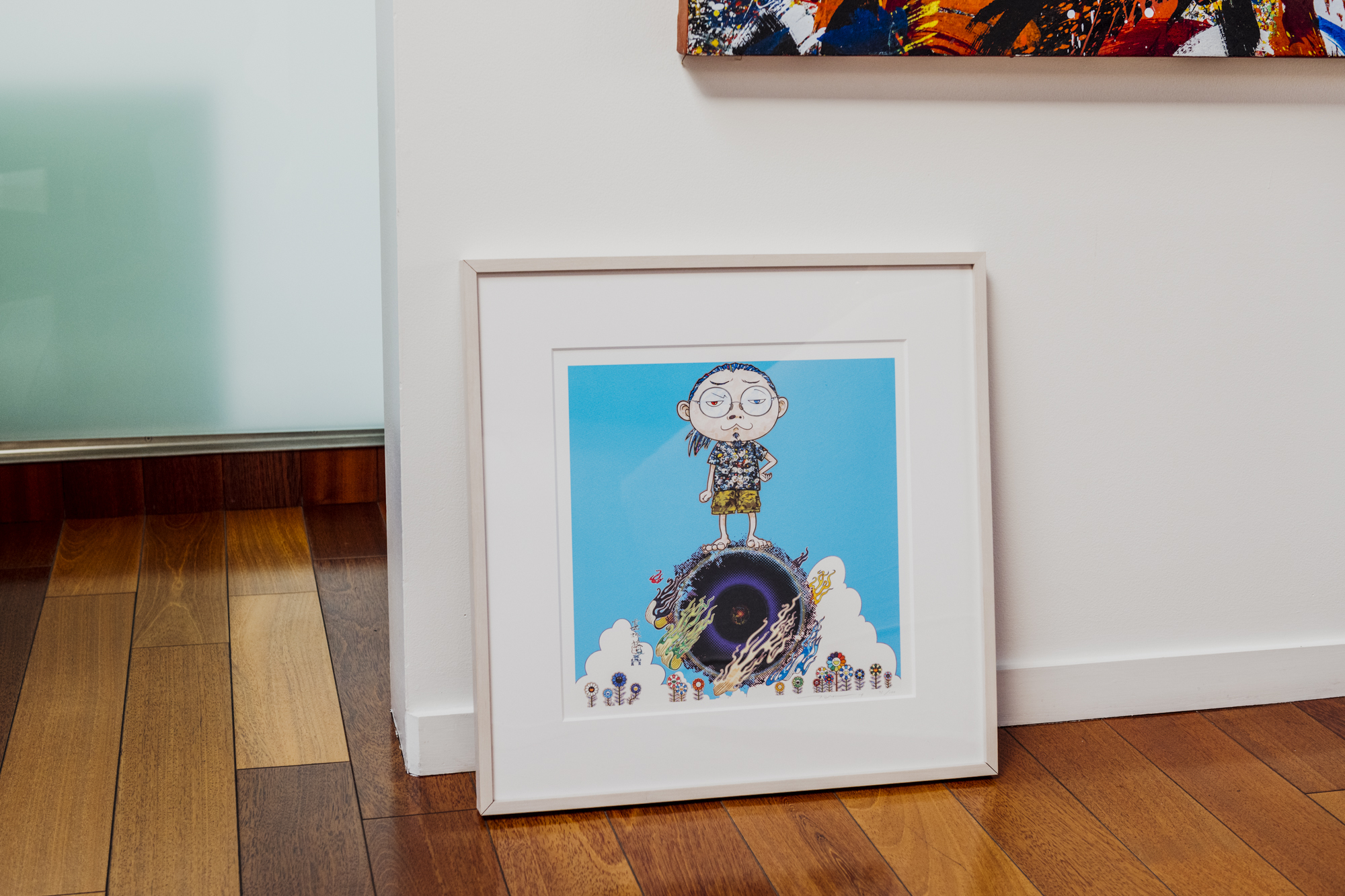 I know Italy inside and out and it really honed my aesthetic sensibility in terms of food and taste. Aesthetics is not just a thing for Italians, it’s life. They care about the details. They care about the story, the romance, and the art of romancing. They take everything extremely seriously and I learned so much about what is good and what is not.

The person I worked for in Milan is like a brother to me. He explained every meal to me: why this pasta was made, why they used this sauce with this particular pasta, where this cheese came from. It was a beautiful environment and education, especially for an American in Europe. 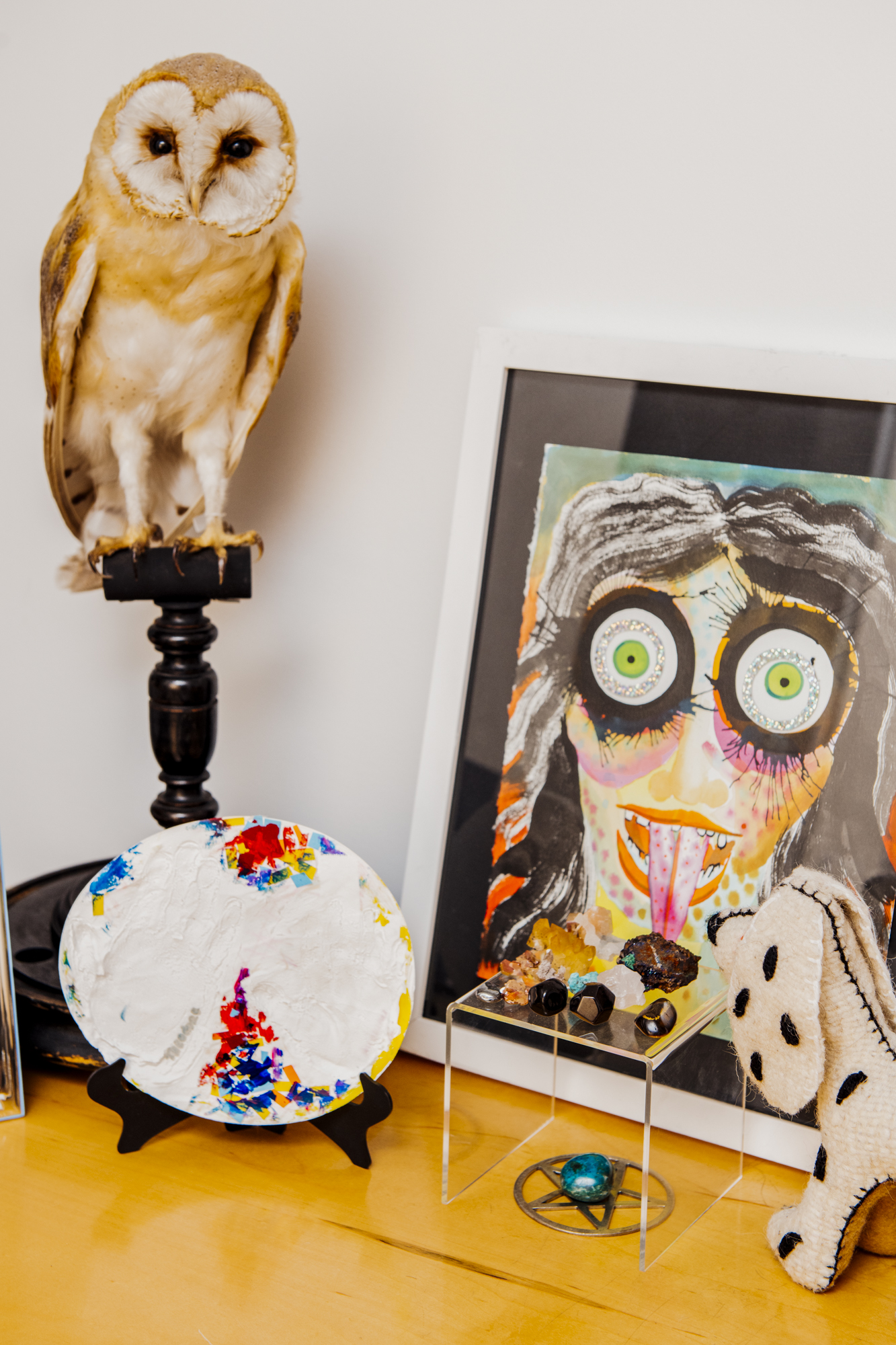 I love fashion because it makes people happy. You’re trading in happiness.

Fashion is something I love. It’s in my blood, maybe not even by choice. I’m going to get really personal here, but when I was 10 years old, my parents got divorced and my mother didn’t have any family or friends. She really relied on me to be her friend, her son, and her partner to go around doing stuff. We went ballroom dancing together and took lessons. She took me shopping. She asked me questions like, “Does this look good? Which color looks good?” She influenced my aesthetic sensibility and that stuck even to this day.

When I was at YOOX, I interviewed one of our customers out of Boston. She spent probably $200,000 a year on YOOX. Which is a lot of clothes. She told me that YOOX made her happy. She doesn’t drink, she doesn’t do drugs, she doesn’t gamble, she shops on YOOX. I love fashion because it makes people happy. You’re trading in happiness. Everything is so dramatic because it’s emotion-driven. Season after season, it’s about the next big thing. When I see women put on a Dolce & Gabbana bustier dress, they just light up because it’s flattering. They feel sexy in it. They feel beautiful. They feel confident and intelligent, and that’s what I love. Men are very much like this as well, when we put on a nice suit or a nice shirt. I think when we inject that into Beboe, we’re trying to do the same thing. 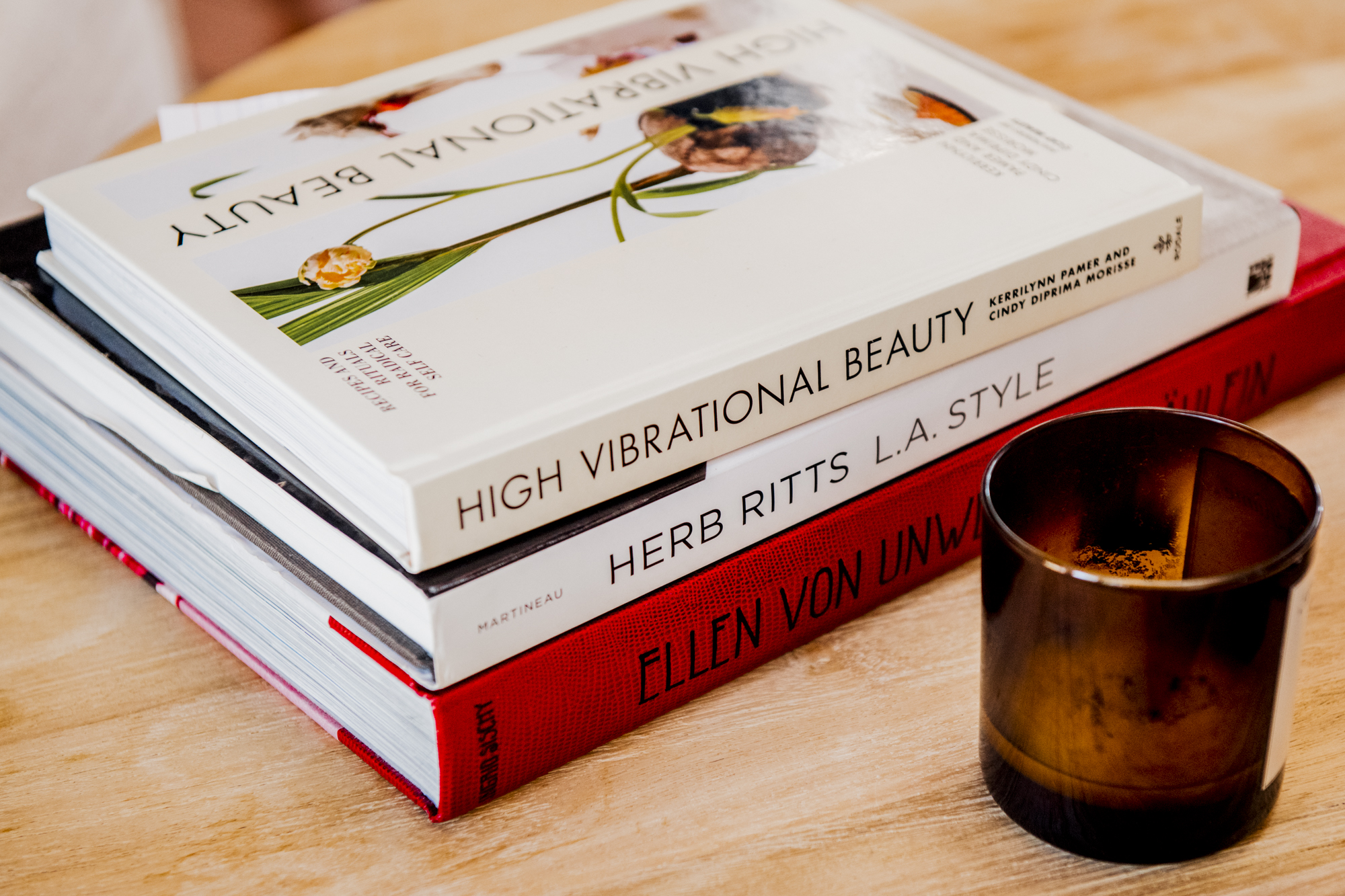 With Beboe, we are trying to inject levity into an industry that needs a little levity. 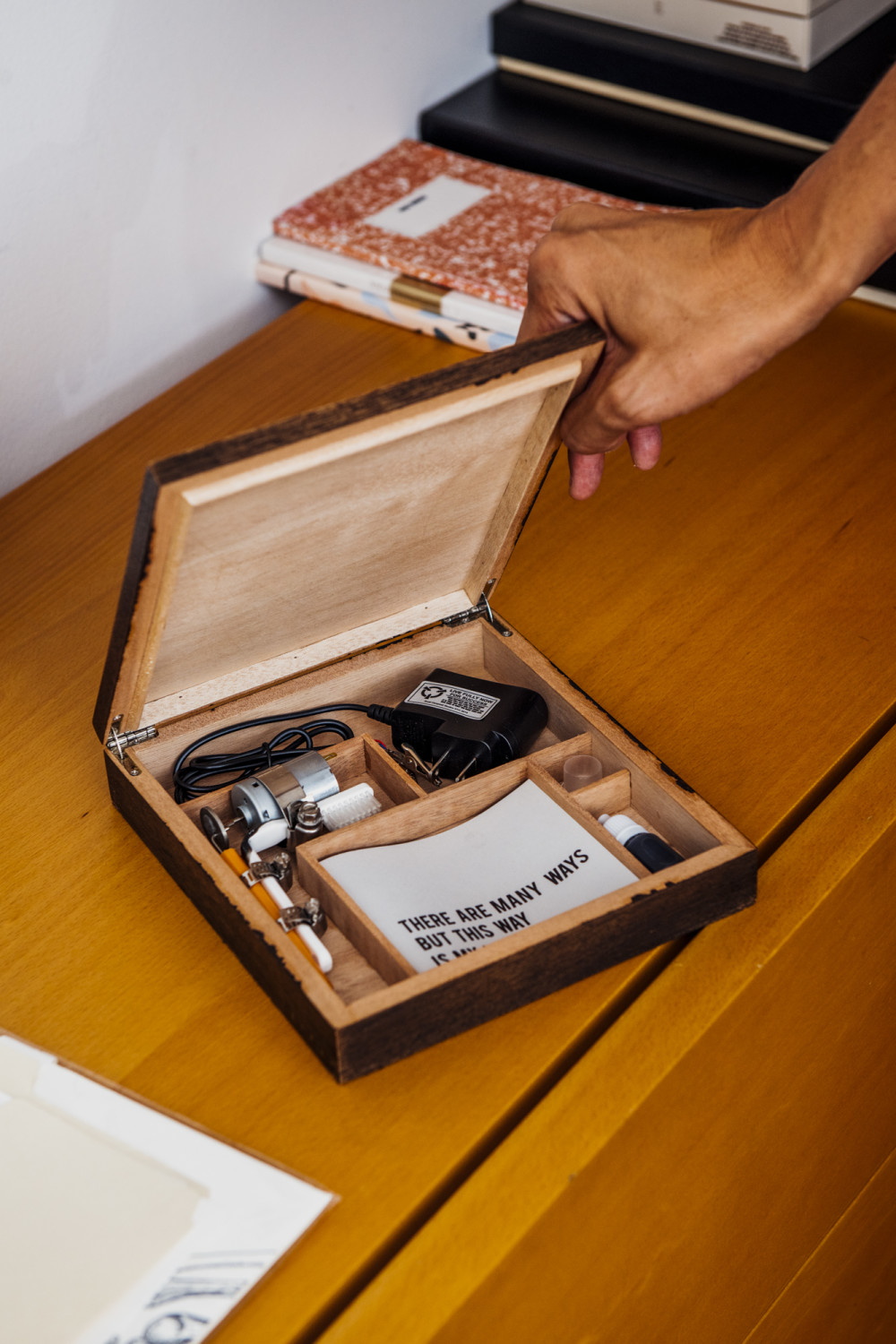 My partner Scott Campbell and I met on a plane to Detroit in 2015 and we really just bonded over cannabis and cultivation, looking at pictures of buds on our phones. What’s really sweet about everything is that if you look at us, we’re two different ends of the earth. But our love of plants really brings us together. There’s just something about their allure and all the positive and negative stigmas that are attached to them.

After touring the industries in California and Colorado together, we realized that what was missing was a brand that appealed to us and our friends. So we literally built this brand selfishly. It’s for us, and the ultimate goal is to be able to bring Beboe to a dinner party and feel like it matches your lifestyle. We felt that a rose gold vaporizer and these little low-dose candies were perfect for that social context. Dinner parties, cocktail parties, wedding parties—whatever.

The company was named after Scott’s grandmother, Be Boe. Scott grew up in New Orleans and his mother battled cancer from when he was 7 ‘til he was 14. Be Boe would make pot brownies for his mother and then these virgin brownies for the kids. And for those seven years until she passed away, Scott didn’t know that there was something wrong. Be Boe injected levity into a really shitty situation. And that inspired us. We're trying to inject levity into an industry that needs a little levity. 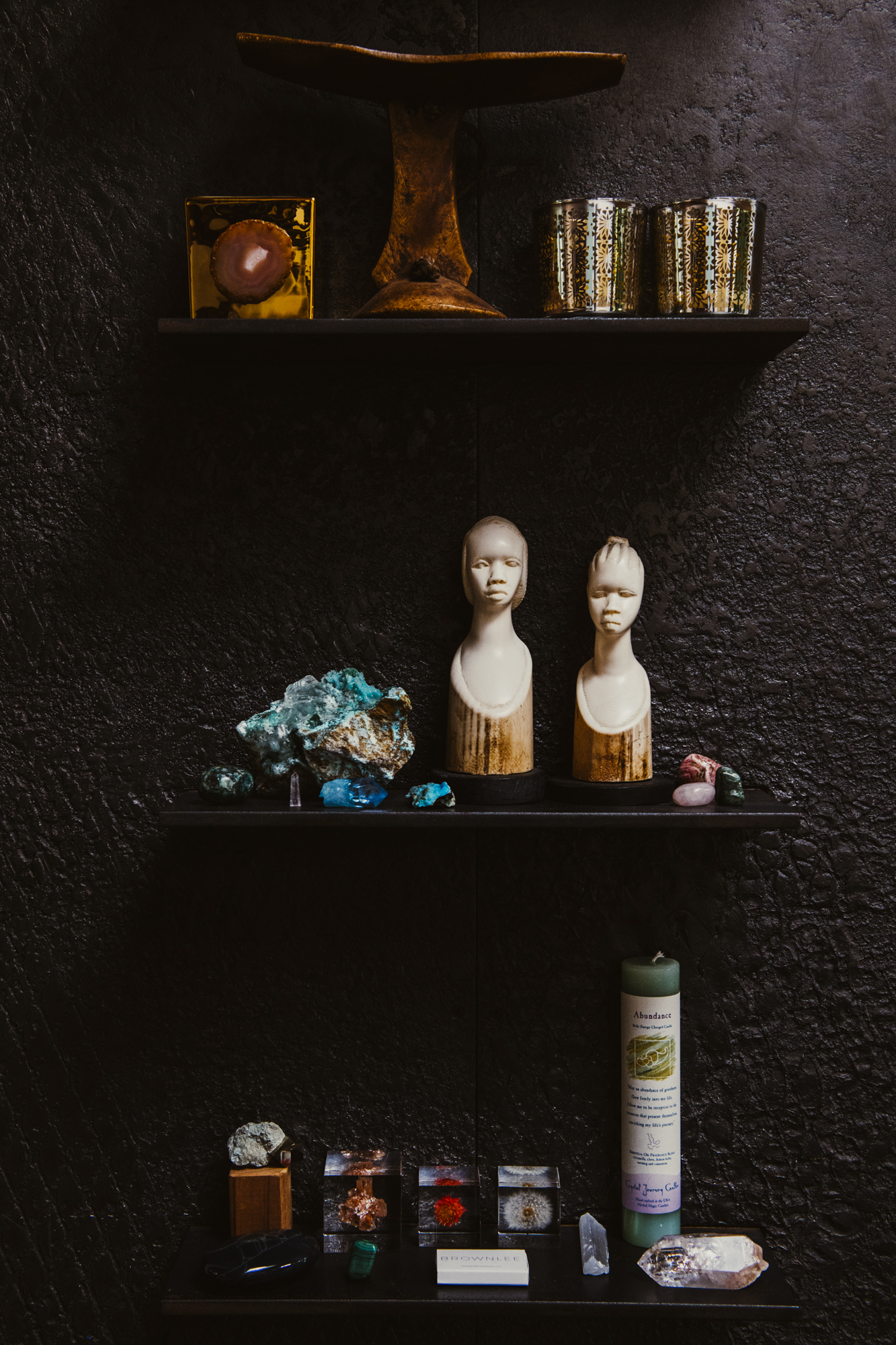 I thank God that I had to grow marijuana for a necessity. I fell in love with it but at least I know what it takes.

There’s a thing that Renzo Rosso who started Diesel and his conglomerate told me. He said, “When you follow passion, the money will follow.” That’s basically our ethos. We are very frugal with our money and things like that, but everything is just driven on the fact that we truly want to make an impact in this industry.

My advice for people who are curious about getting into cannabis is: think about the intention. Why do you want to get into the industry? What is it that you would like to do and what is it that you’re trying to say? What’s the story? Because I think ultimately that’s what it’s about. It’s really not about the money right now. There are some exits and people are going public, but that’s still not a lot of money. There needs to be another justification. Also understand that it takes a lot of lateral and special thinking, because not everything is binary. It’s not a linear path to growth. It’s not formulaic. I think a lot of people don't realize that that’s what it takes. It’s still a very heavy people business. There are a lot of characters that have paid their dues and you need to reach out to the OGs of the industry. You have to do your homework. You’ve got to understand the history before embarking on what you want to do. I thank God that I had to grow marijuana for a necessity. I fell in love with it but at least I know what it takes, you know what I mean? That’s my advice. 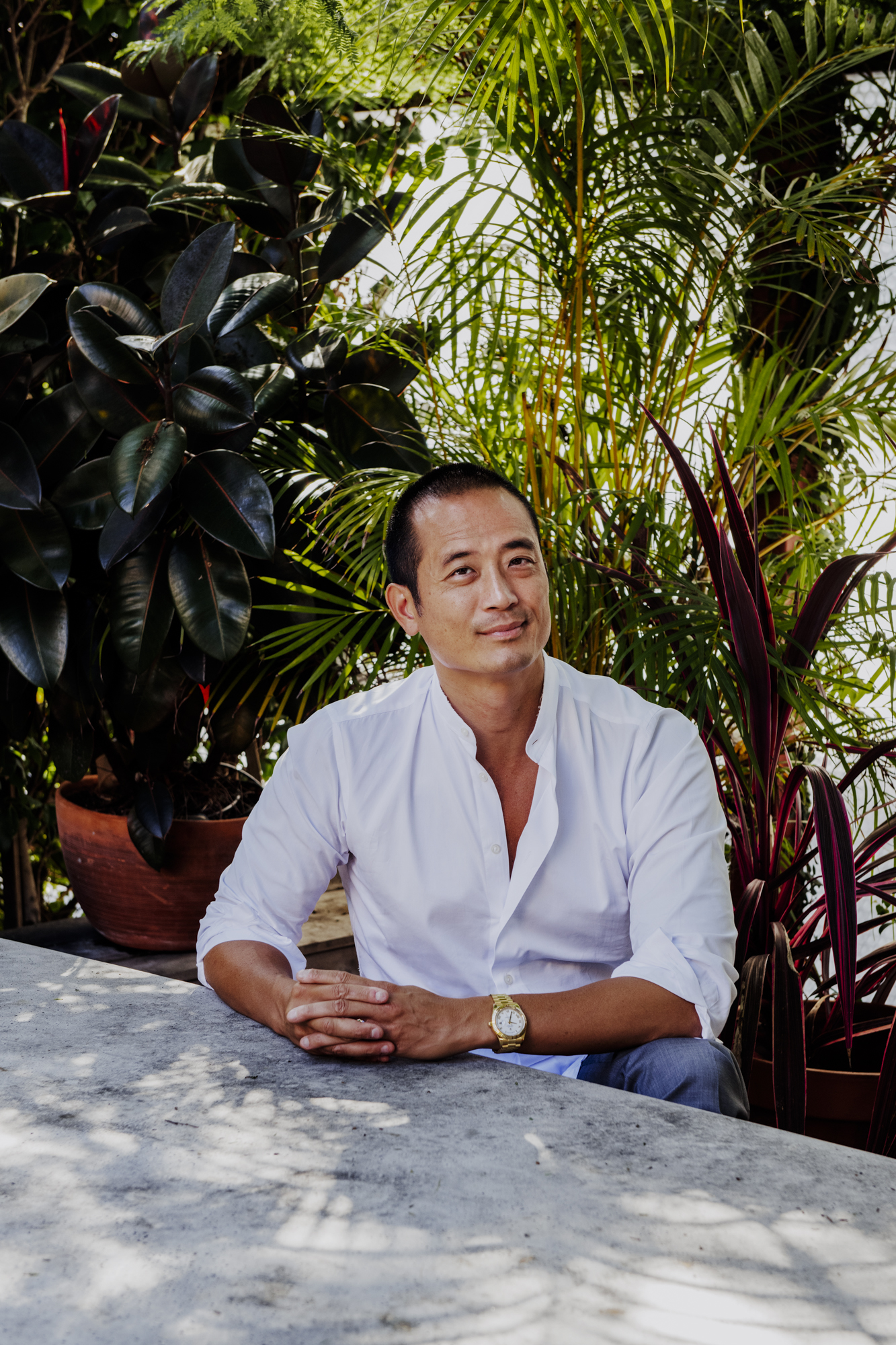 I pivoted so many times in my life: I went from wanting to be a veterinarian to becoming a banker, and then into fashion, at which point my mom was like, “What are you doing?” With this turn to cannabis, she knew that I was passionate about it, but the first thing that came out of her mouth was, “Is it legal?” I was like, “Of course it’s legal.”

She has come to embrace it. She’s seeing that we are doing something good, that there’s some potential to what we are doing. That’s been a very important turning point for me.

I have two kids now. They were actually the impetus, or catalyst, for me to launch Beboe. Because I just thought about the day when my son would say to me, “Daddy, what should I do when I grow up?” The answer is, “Follow your passion.” But it’s very disingenuous to say that if I’m not following my own passion. That's how I realized that I needed to do what I’m doing. 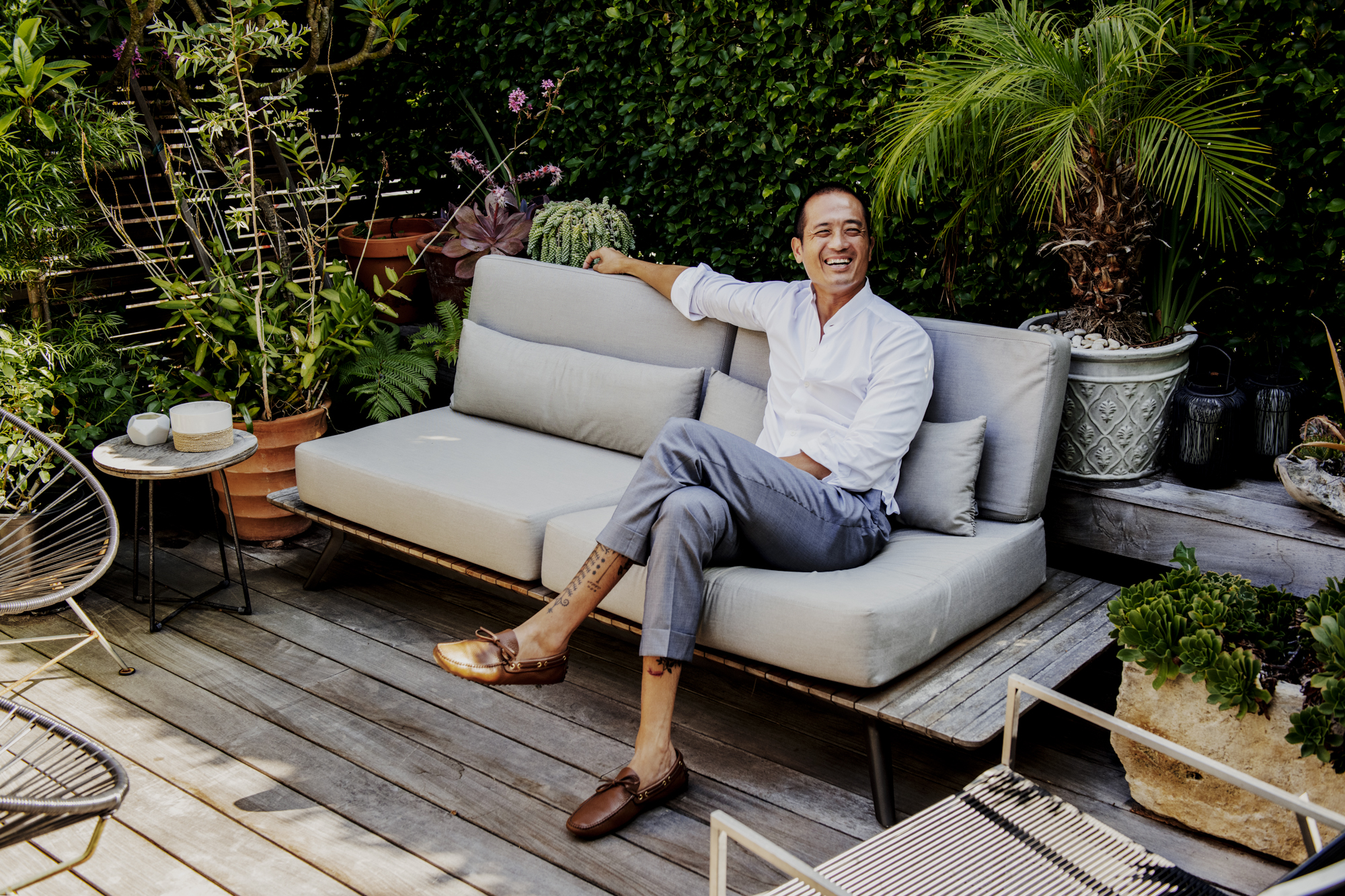 Clement Kwan photographed by Brian Guido at his home in Santa Monica, California. This interview has been edited and condensed for clarity. 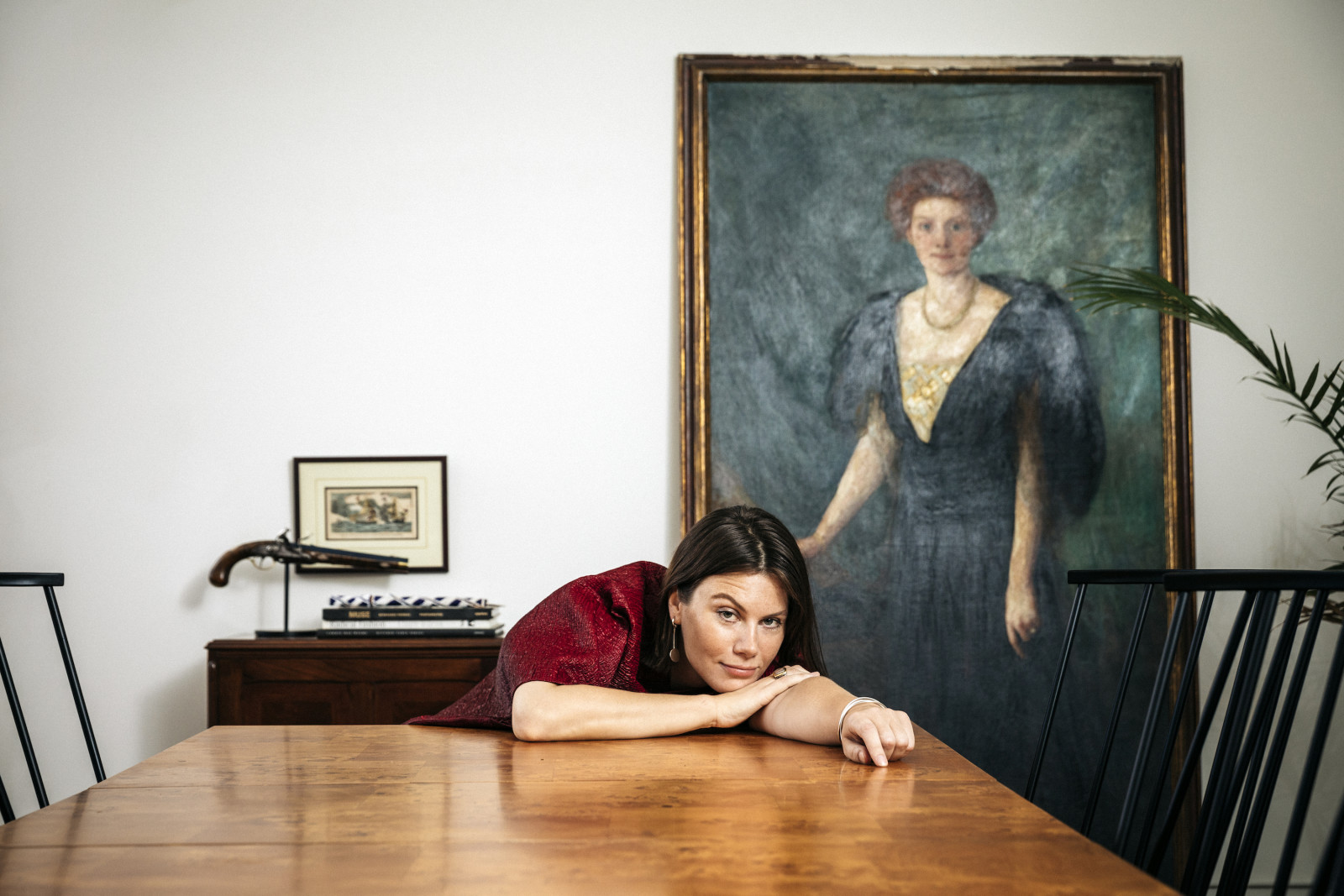