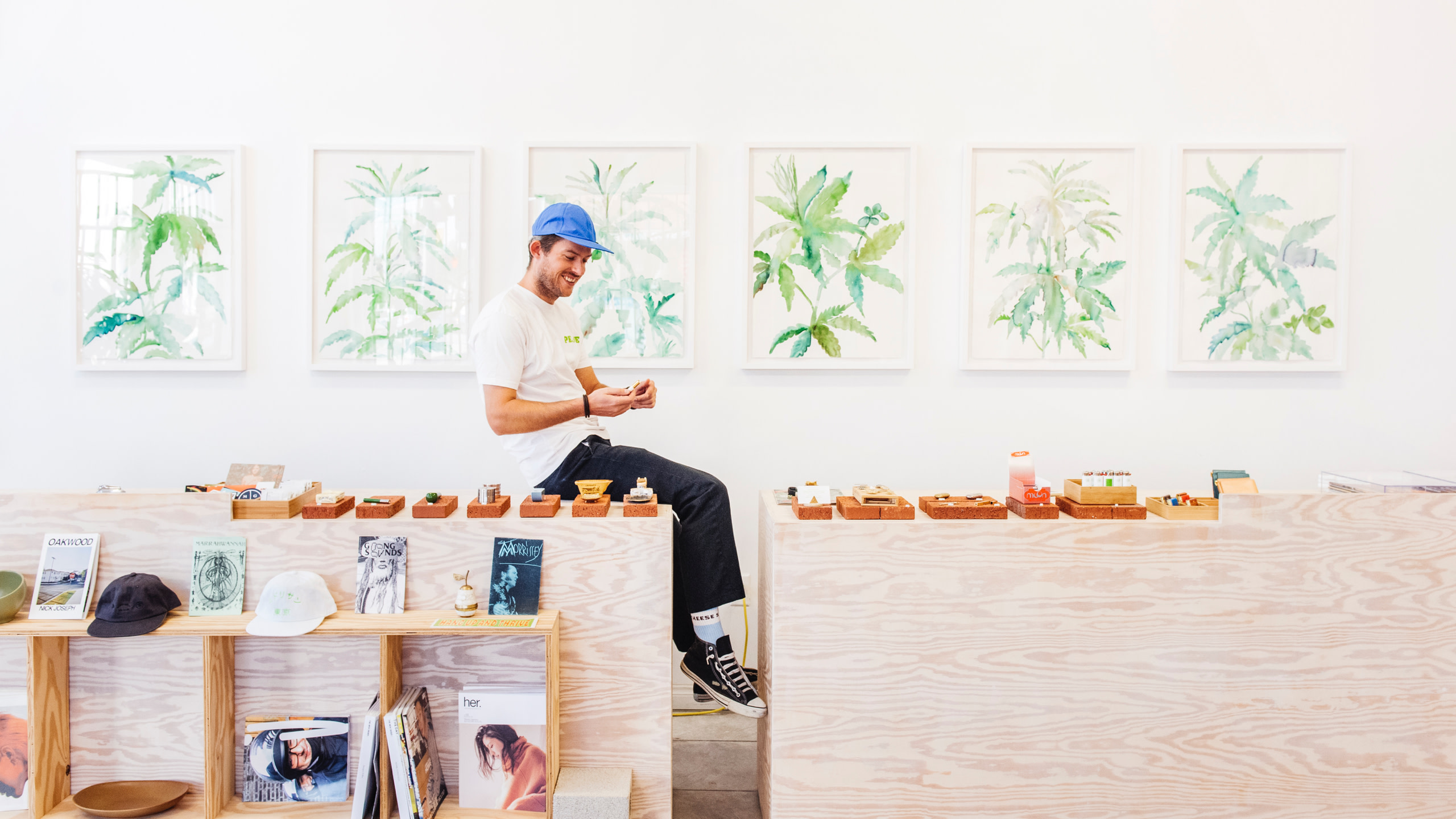 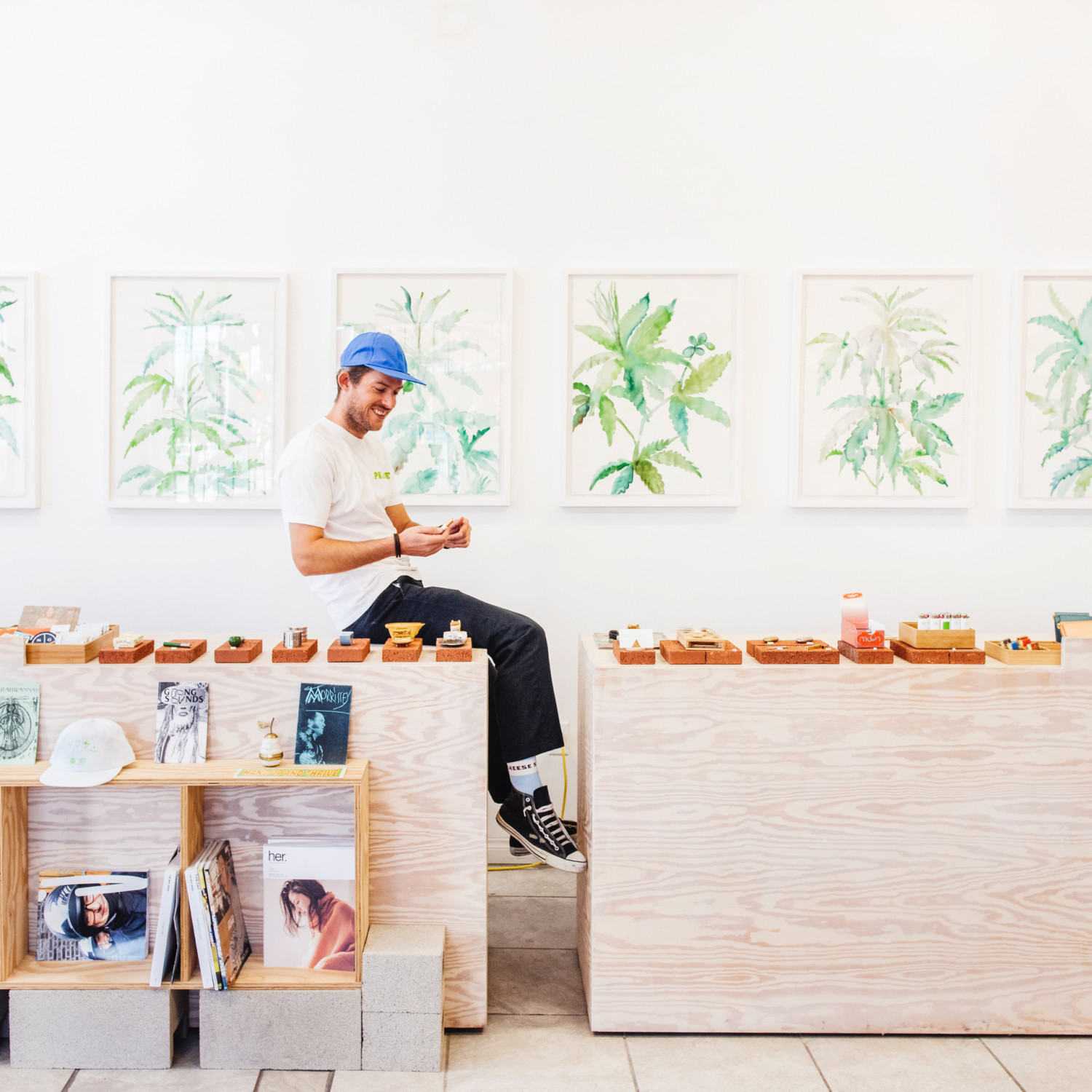 The founder of Mister Green on the Portland he grew up in, L.A. commutes, and what it's really like to start your own business.

Welcome to our series of conversations with curious, clever, and captivating people—in other words, the kind you’d like to sit next to for an hour or two.

I grew up in Portland. It's a very different city now than it was at the time, when that sort of "post-hippie settler" thing was happening. My parents were a part of that. I always associated it with being pretty slow and sleepy, but also nice and quaint. People were in touch with nature and craft culture. Like, "artisanal"—which is a word that we almost hate in this day and age—that was a means of subsistence at the time, in a very true and real way. My mom used to make clothes to sell at the market.

Growing up in that culture, I got really jaded about the stereotypical "lazy hippie" who's sort of grappling with the last vestiges of a movement that potentially ended years prior. But one aspect that I never seem to get tired of—I almost feel like I'm reading a speech right now, but this is genuinely true—is that I've always loved head shops and illegal things, and weed was such a perfect thing that involved all of those at once. It's political, trippy, illegal, underground.

I used to go to all the head shops along Hawthorne Boulevard where I grew up. My mom worked at a runaway shelter, and next door was this head shop called the Third Eye Shoppe which was really famous. Jack Herer opened it. They just closed down, which is really sad and surprising. The unfortunate truth about most industries is that if you don't modernize, you get left behind. But it really was a landmark, especially in terms of that culture.

I got out of Portland as soon as I could, pretty much. Small town, bad weather, that kind of a vibe. And I knew that I needed to get to New York. Right when I arrived, I got a gig with Converse as a PA. I didn't even know what "PA" stood for. I think it took me three days before I straight-up asked somebody.

The unfortunate truth about most industries is that if you don't modernize, you get left behind. 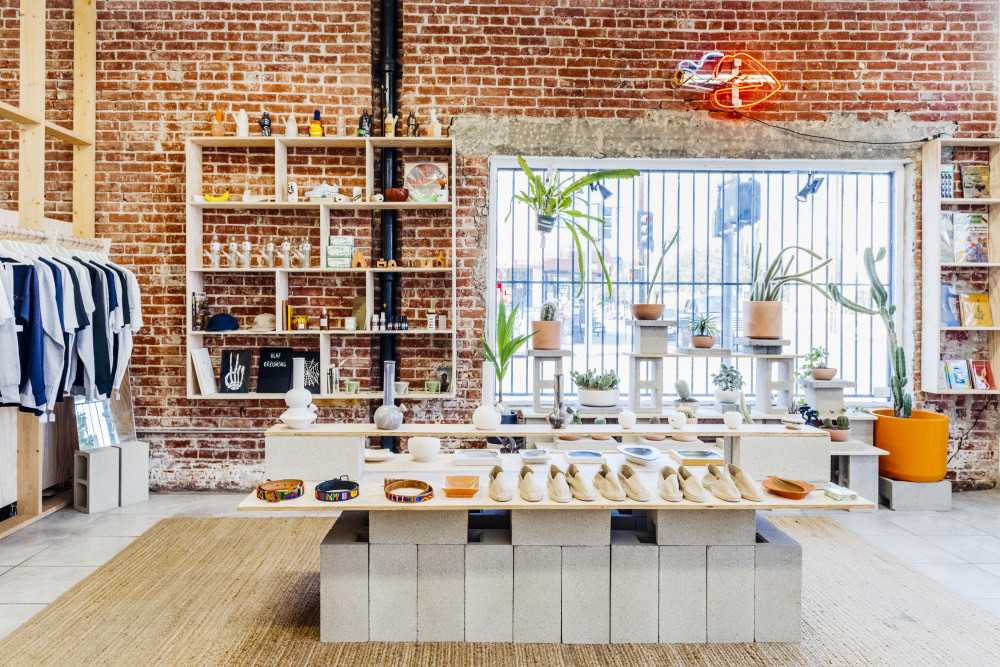 When I left Portland, I had been working for the Ace Hotel—they had just opened. The founder, Alex Calderwood, became my biggest mentor, even when I moved to New York. It was sort of the best situation possible because his connections were so vast. I remember we showed up at a house party and the host was a bit leery because Alex was like one of the oldest people in the place. And then Anohni from Antony and the Johnsons showed up, and she was like, "Oh my God, Alex!" And when you get that kind of a nod, the worries tend to drift really quick. He was just that sort of guy for me.

I got a really great education working at Ace. My last role with them was developing products for the shop. I would basically come up with the idea, figure out if we were going to design it in house or work with a partner, and then figure out where they were going to be located—which hotels, which additional boutiques—then the PR story, and, finally, how to launch it.

At the same time, I was looking at all the weed stuff that was going on. It was fascinating to see the laws change in Colorado, and all these celebrities start to come out—and not the usual ones, like Woody Harrelson. I have always smoked weed, and have always been interested in what's going on in that world. I kept seeing these signs. The "green rush" hadn't really gone crazy yet, but I was hearing all these stories, like about some lady in Beverly Hills who has a $93 million fund to find the next weed brand, or whatever. And I was like, "Wow, this is going to happen really fast, and I can't wait to see who does something that I'm going to like."

Up until that point, I just felt like everything in the space was really one-dimensional. People weren't thinking about things in a way that allowed for someone to make something without a leaf on it and still have it be related to that world. So I waited and waited and waited, until I was like, "You know what? This might be a thing that I have to make." And it just grew from there.

It's very good to be told no, because you stop assuming people understand what you're trying to do.

I started going to Japan about nine years ago. I was so taken by it that by the time I finally moved there, I'd been three times in that same year. I lived in Tokyo, in the center of the city, in Shibuya. What's amazing about Japan is how dense it is and at the same time how well they're able to create this closeness with nature and peacefulness. Living there was incredible. I honestly didn't really want to leave. I just had such intense convictions of what I could do with this company that I knew I wouldn't be able to achieve there. I felt—and I know it sounds weird—that I was called to make this thing happen. And that meant coming back to the States.

It was incredibly hard to explain to people what I wanted to do. I didn't have any of the words. It was just, "It's going to be about weed. We're going to make branded merchandise. We're going to curate interesting paraphernalia."

And that was really not going well for the most part. But as soon as I mocked up the site, even the people who were the most critical started to wrap their heads around it. I would probably attribute that to my inability to articulate what I was trying to do more than anything.

Some of my best friends, though—that's what drove me so crazy! I have a lot of friends in the creative community and one of my best friends from Portland is just as cool as it gets, so I thought he would totally get it. And it was like him and my mother—who also didn't get it at all, which was so annoying because of the whole hippie thing—those two were just confused by what I was doing.

And it really got me mad, that I couldn't explain it to them. But it's very good to be told no, because you just stop assuming people understand what you're trying to do. Especially when they should be relating to it. Those few critical moments really helped hone the idea and put a little more juice in the whole thing. Like, if the people most important to me don't get it, then I've got to work harder.

The other thing that I think helped me accelerate everything is that I couldn't find a job here. So I was forced to keep making this thing happen.

All the jobs I interviewed for in L.A. were on the Westside. You want a job that's going to make you some money in L.A.? It's on the Westside. So during all my interviews, inevitably, I'd be like, "Soooooo, how's your commute? How many days do you have to be in the office?" And those kind of questions … Well, it wasn't the questions necessarily that knocked me out of the running, but the realism on their part in answering and then my reaction. They were probably like, "OK, so we've got this guy for six months, max. He's not sticking this out."

Nature is the greatest tripper. 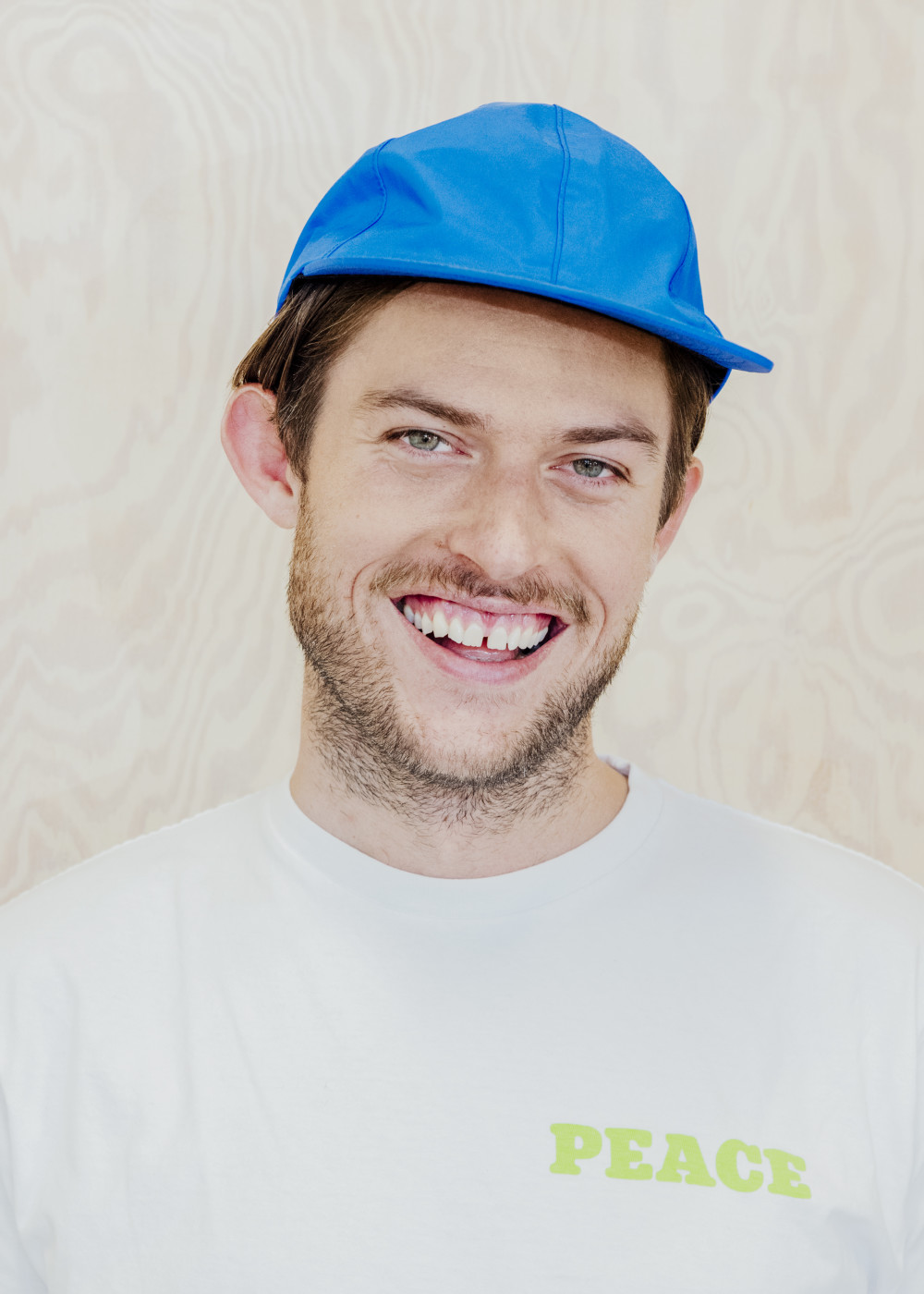 When we were building out the space, we adopted the phrase: Nature is the greatest tripper. Inspiration-wise, I was like, Mister Green needs to be three things: first was a hearkening back to the counterculture movement, to hippies, to experimenting with psychedelics, to anarchy—all of those feelings and aesthetics.

Another part would be a "lifestore," curating products that help inform what we were trying to do and create a marketplace of design-forward goods that show people that there's some really beautiful stuff out here—that if you're already interested in design and consider it an important part of your household or daily life, then these won't interrupt it in any way. Rather, they'll enhance it.

And then the third part was this idea of universality—almost like a corporate structure that would allow this thing to scale.

I shudder whenever people say they want to make the next Starbucks. That's not necessarily where I'm trying to go, but they're obviously one of the most successful brands ever. Starbucks was a very specialized type of coffee shop that introduced coffee culture to the masses. So looking at it in those terms, it would be nice to have a conversation about cannabis on that level.

Friends and interns are very similar in the fact that you cannot rely on them for very much. 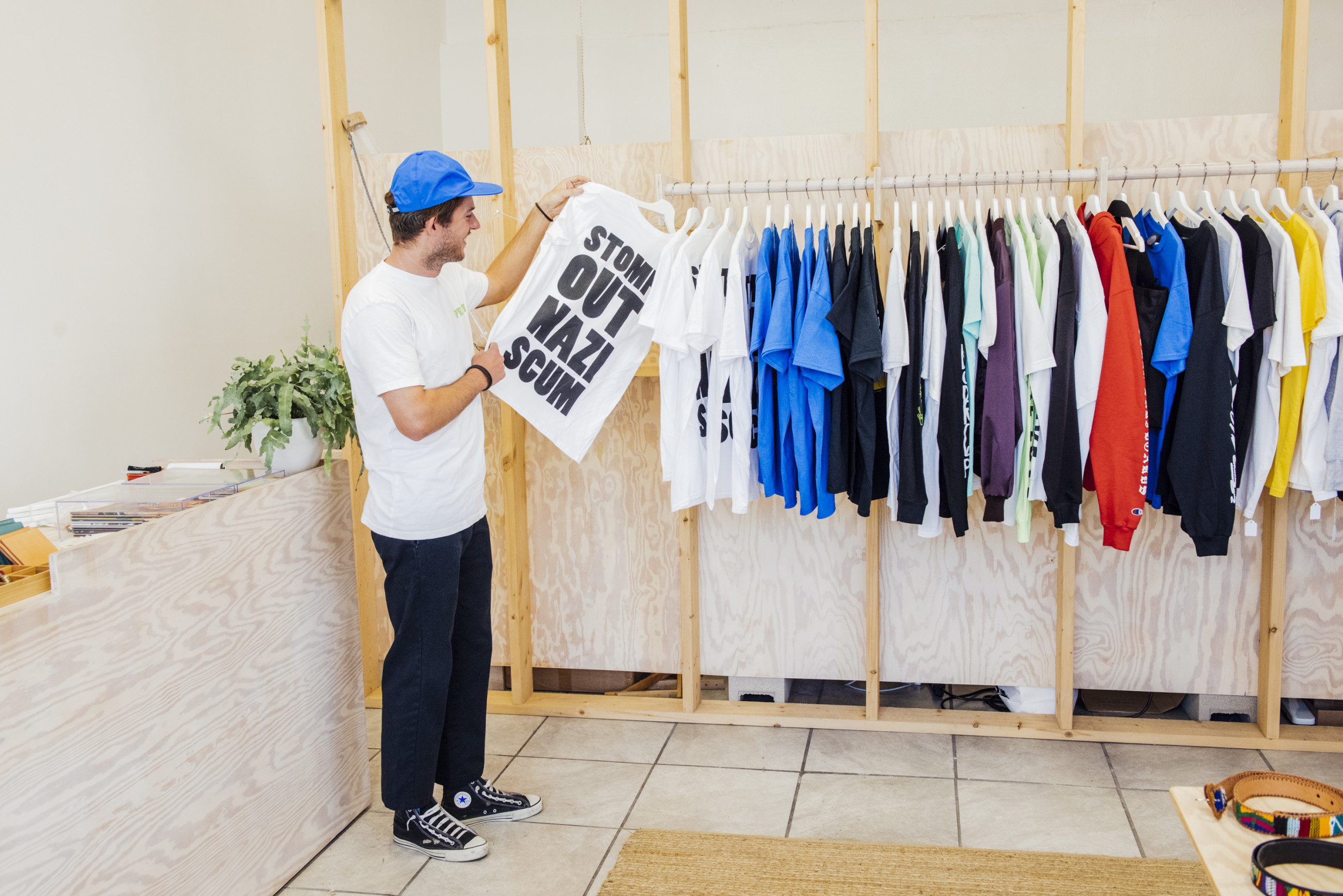 The real-world version of running your own business is that you're alone. I don't have anybody that works for the store. I've got a great network of friends, and I've got a few interns that help me out with a lot of things, but, you know, friends and interns are very similar in the fact that you cannot rely on them for very much. I would love to have some employees. But the truth is, I think, that there are some people making money and then a lot of people pretending like they are making money. I think that describes the weed world and the world in general.

I was in Portland last week and all my friends were like, "Man, it looks like it's going so well!" And I was like, "Well, I haven't paid my rent this month." I was tracking, like, every fifty bucks. Every sale. Like, "Alright, we're getting there." And then we made it over the top. So as long as that's happening and there is an inkling of a grander existence down the road, I'm going to keep hustling in the truest sense of the word.

The Equal Justice Initiative has been pretty eye-opening for me. One of my biggest issues about what's happening in this industry is that the Black and Latinx communities—who are the most disenfranchised and are incredibly underrepresented—have been disproportionately the most affected.

But look at Oakland. People who have been adversely impacted are fast-tracked to getting the licenses for dispensaries, which I think is the raddest thing ever. It's amazing. If I could figure out a way to help set up a framework for franchising or expanding that could create the same sort of opportunity, that would be really meaningful and powerful for me. That's the kind of model that's most attractive to me. Ariel Stark-Benz photographed by Brian Guido at Mister Green in Los Angeles. This interview has been edited and condensed for clarity. 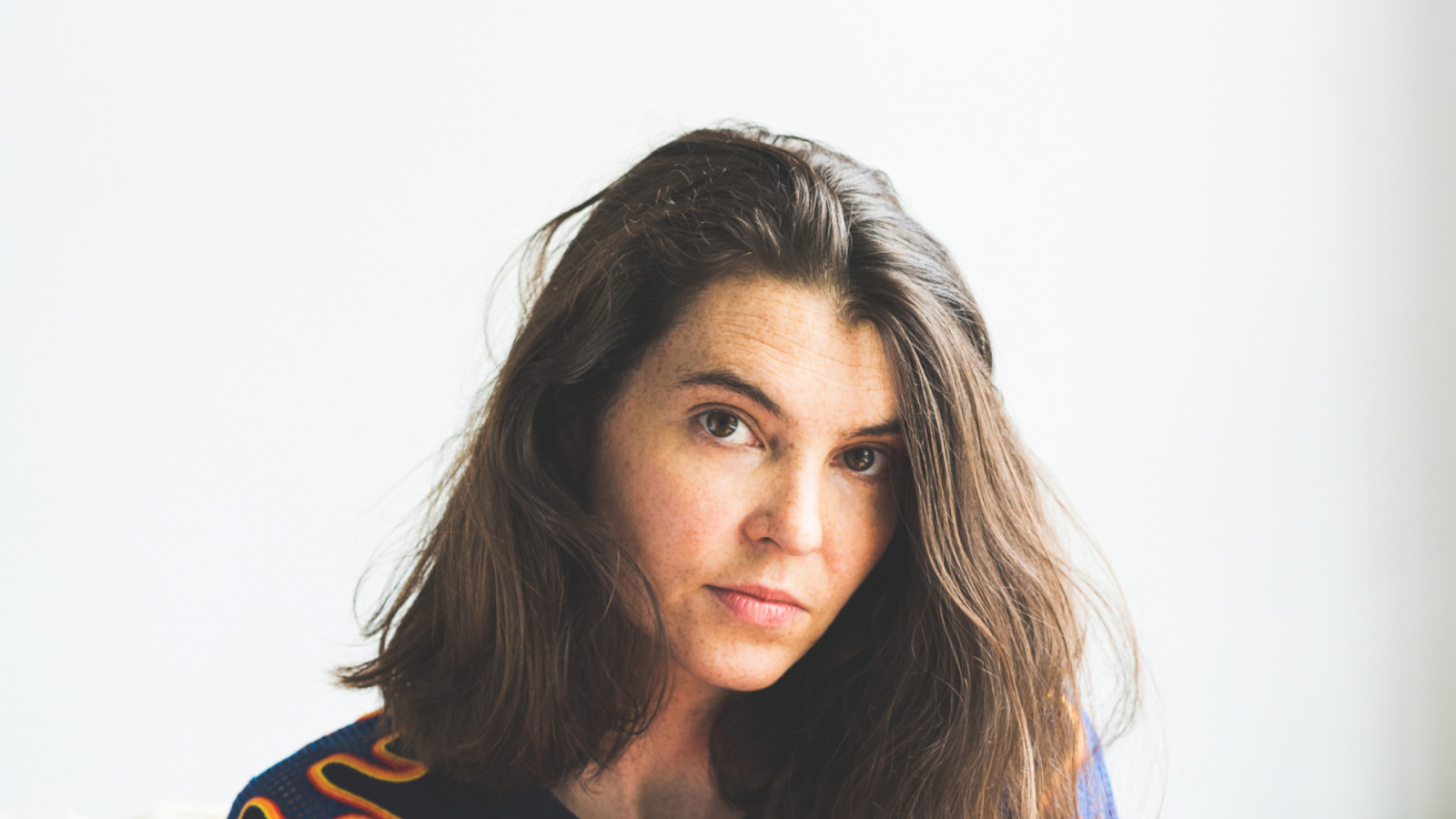