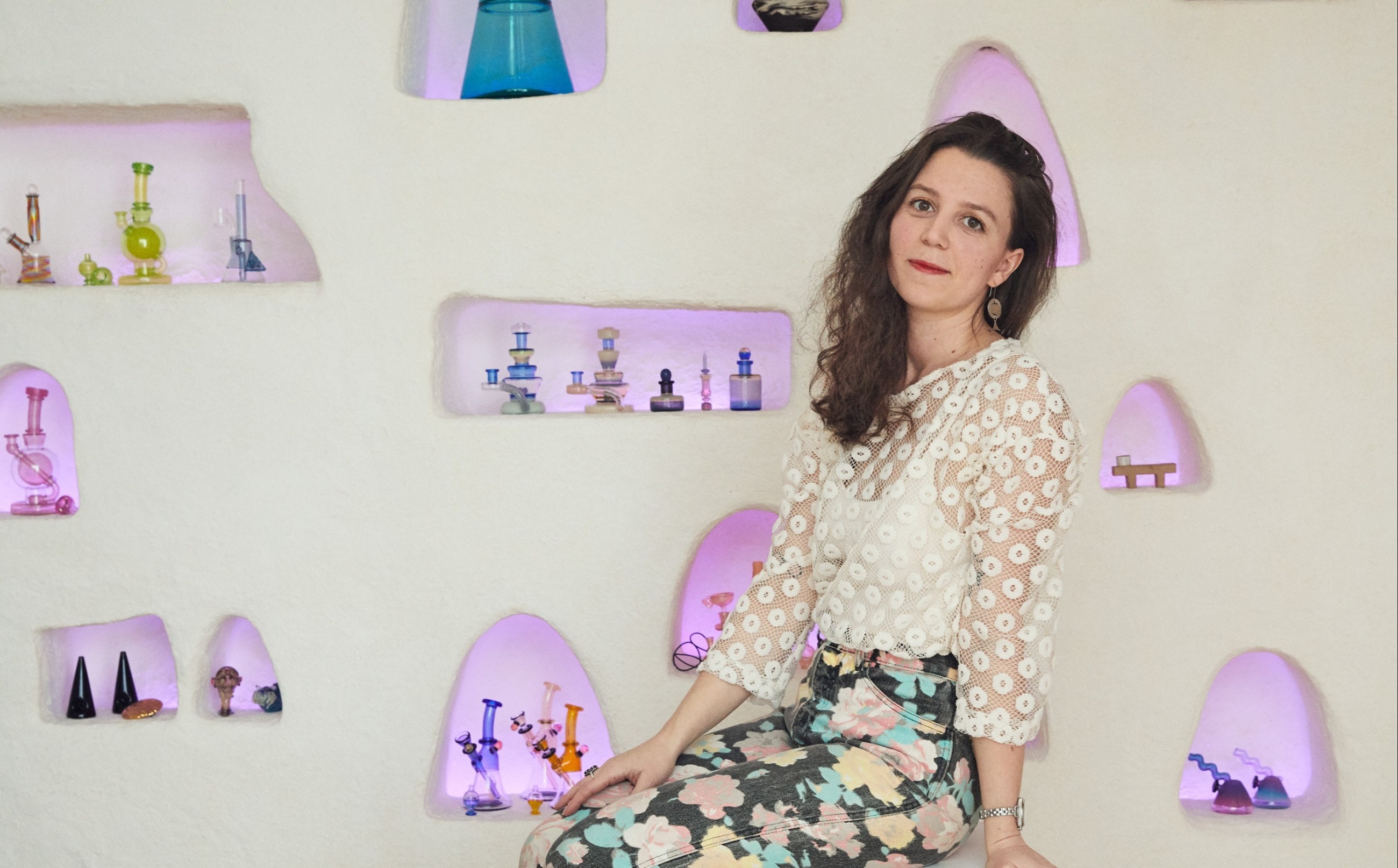 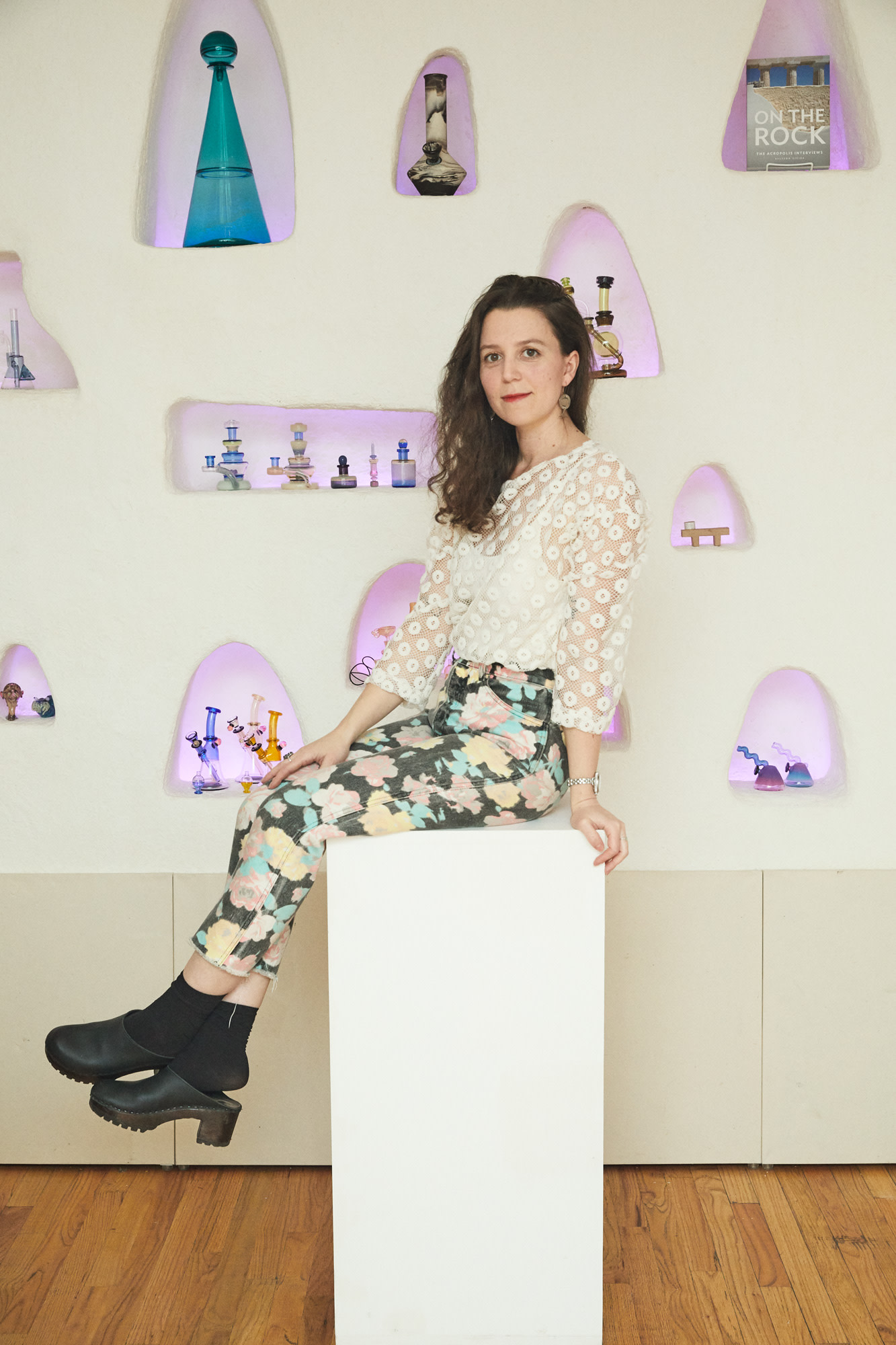 The co-founder of New York’s Alcove on solving puzzles, the spectrum of sobriety, and why smokeware should be its own category of home goods.

We joke that my husband, Alex, recruited me for Alcove. I had been working full-time at an art book company for 10 years, up until the fall of 2018. Earlier iterations of the idea for Alcove came from our own experience while shopping. We were looking for smokeware for our house that wasn’t boring or hideous or obtrusive. We started noticing artists and designers who were making things we were interested in, and realized that there wasn’t really a place to find them here in New York.

We wanted to create a place where people could come in and really be inspired by smokeware. We’re six months in, and that’s what we’re finding. People come in, and they just can’t believe these things exist. They’re so excited to see funky objects and strange shapes. For someone who loves smoking weed, to be able to have their experience elevated by the way that they’re doing it or the product they’re using—that’s what we want. 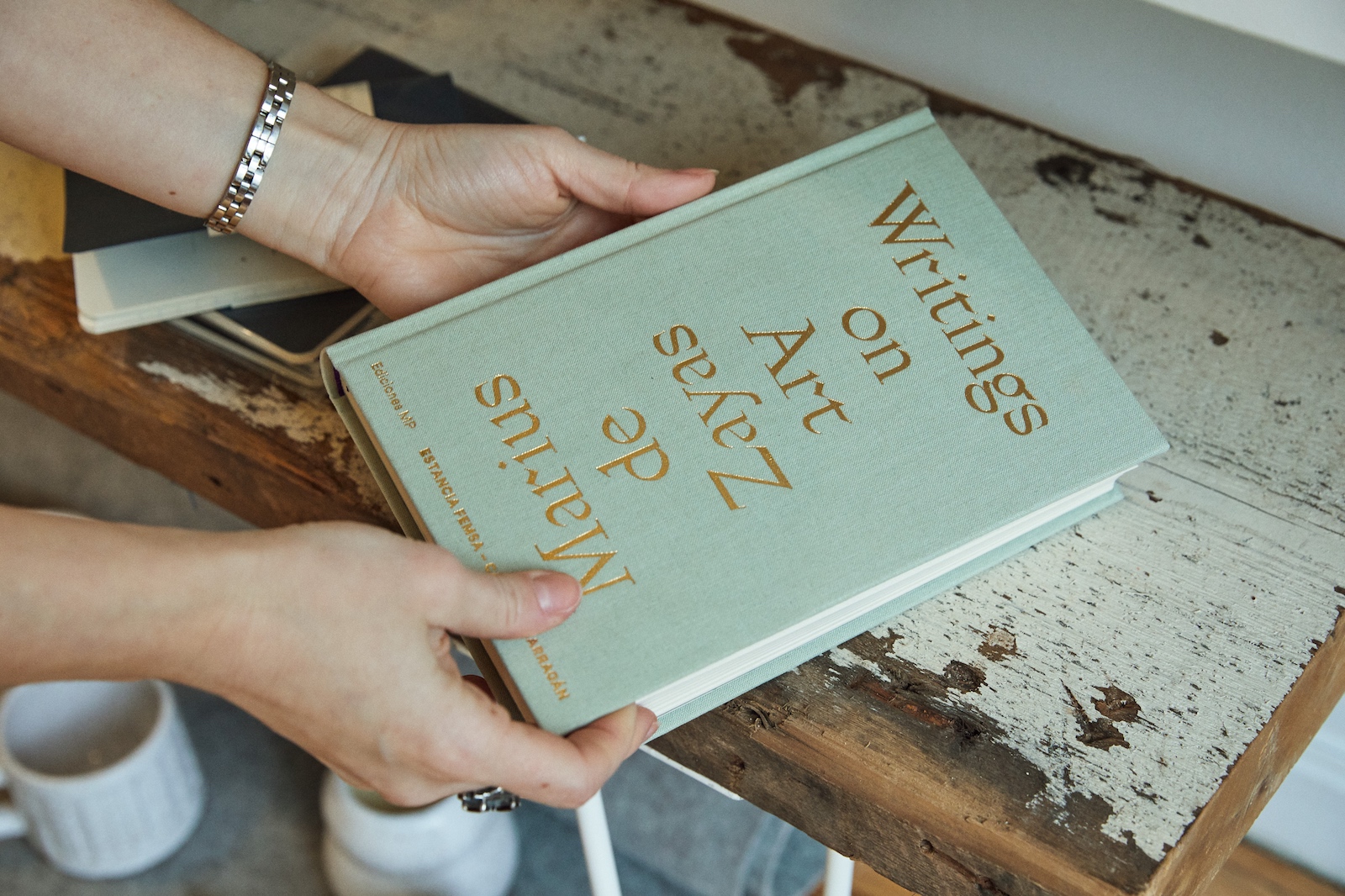 We wanted to create a place where people could come in and really be inspired by smokeware. 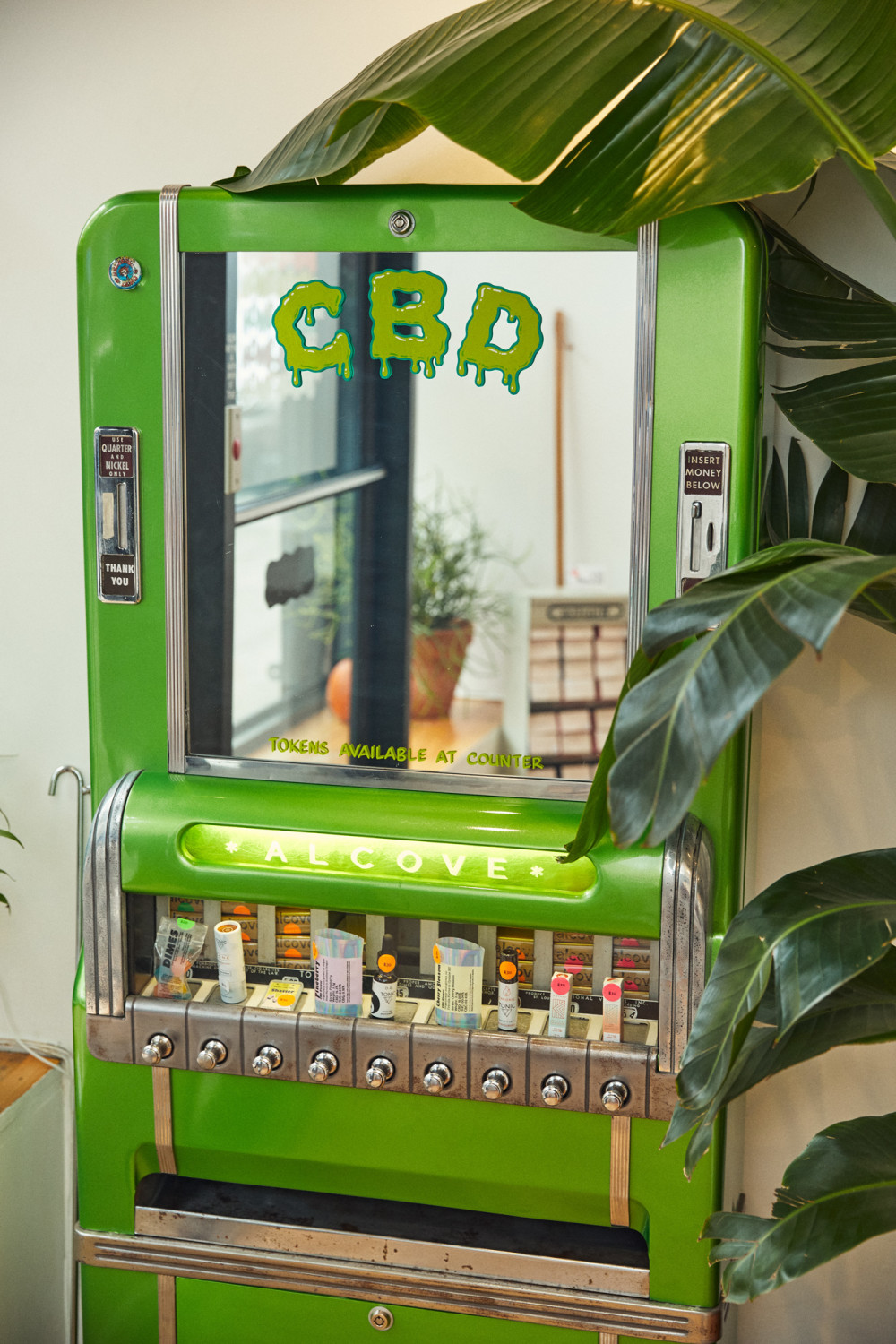 I come from the art book world, and back in the day you would say something like, “Oh, I have a new book that I’m publishing—you can find it at ‘better bookstores.’” I struggle to describe it even now because I grew up with Borders and Barnes & Noble. But we think of ourselves as a “better” smoke shop in that same way. And there are a couple of other shops like that here in the city.

Alex was gunning on the idea and I think I was looking for a good enough reason to leave my job. I worked for a really amazing company called Artbook | D.A.P. It’s run by women, and family-owned. It’s full of amazing women and men. It’s sort of a two-fold company: on one side is retail, and the other is wholesale. I did both.

D.A.P. is unique. They’re essentially an importer, bringing books from art institutions all over the world into the U.S. One of my favorite parts of working there was being at acquisitions meetings, where we would sit and decide what we were going to bring in and why and what the market was and how many copies. Six hundred. Two hundred. Two thousand. It was cool to see a 360-degree view of the commerce of it. It’s so strange, because in a way, they were the first ones doing this. And they’re going to be the last ones doing it, too. 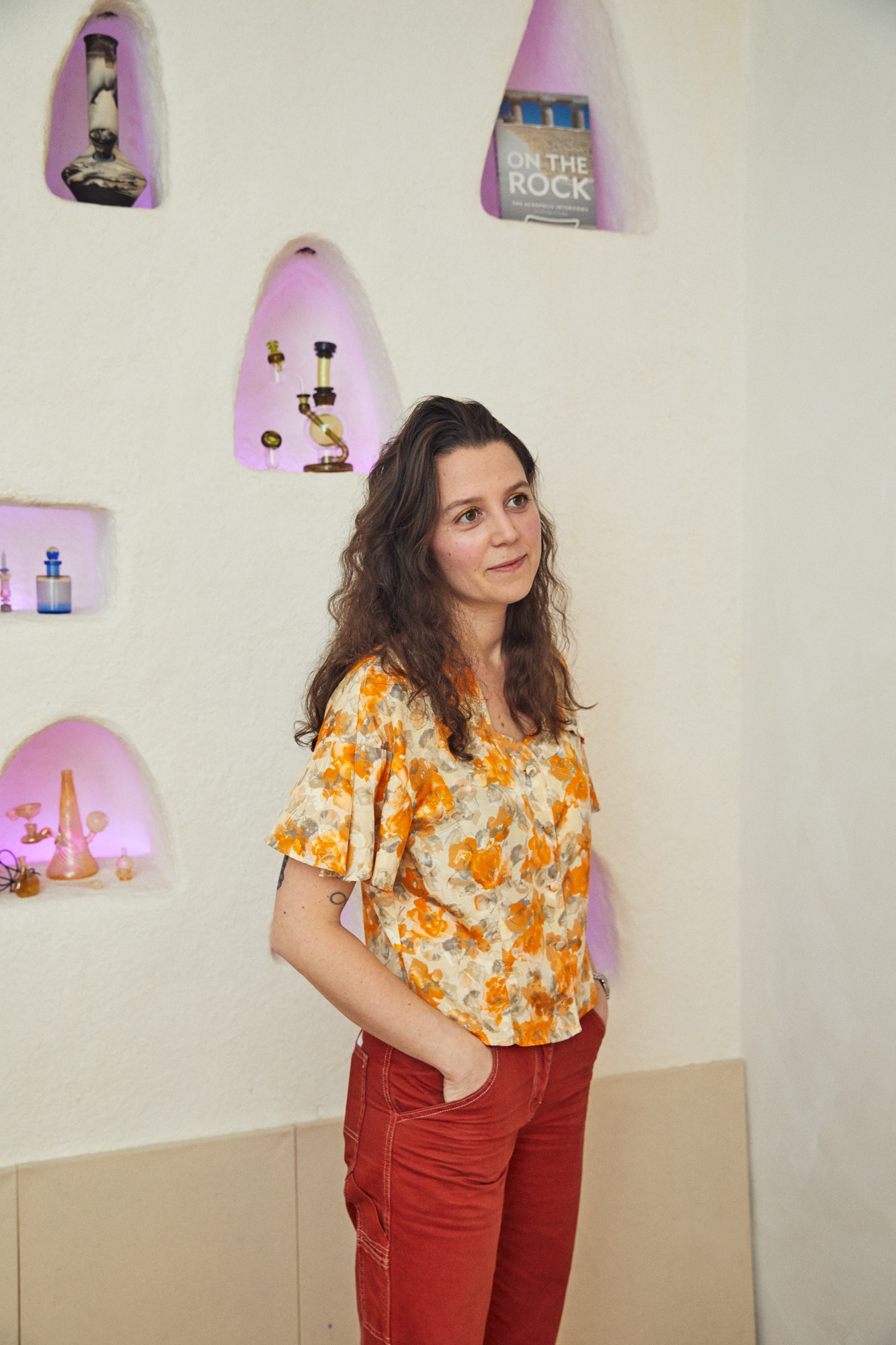 I began on the retail side, managing the bookstores at MoMA PS1 and at a temporary exhibition space in Chelsea called X Initiative, which doesn’t exist anymore. We also opened a store in L.A. at Hauser and Wirth’s new gallery. I started as an intern, became an assistant manager, manager, buyer, and then an overall buyer for all of the retail locations. After that, I still wanted to do more there, so I ended up switching over to the distribution side of the company, which was a really amazing and interesting experience, too.

I’m from the San Fernando Valley. Reseda, specifically. It’s super suburban: 1940s farmhouses, orange trees, culs de sac, malls. Cannabis came into my life very early on. I didn’t drink until I was in college, so all of my “partying” was really just smoking weed with friends. One of my best friends started growing weed in his mom’s backyard at 13. It was normal to me. Weed was very easily accessible. We had pretty good stuff, which I feel lucky about.

Alex and I have been married for about seven years, but we met when we were 13.

Alex and I have been married for about seven years, but we met when we were 13. He was year-round at an arts high school within an art college in North Carolina. I had gone there for a summer intensive in ballet. He’s a musician, I was a dancer—it was young love. We were pen pals, phone pals. You know, classic kitchen-phone-with-the long-curly-cord-into-the-bathroom-at-night. We stayed in touch for a few years, probably until we were 16. I dropped out of ballet and out of high school. I started to go along a different path. We lost touch. I also started doing visual art at that time, which was the saving grace of that moment in my life. Alex and I both stopped drinking around the same time. For me, it’s been two and a half years. I went totally cold turkey, like no substances at all. I stopped smoking weed. I stopped doing blow on the weekends. I just stopped partying and tried to level the fuck out and re-find my baseline.

I think that was a really chaotic period for both of us in our relationship and our friendships—late 20s, turning 30. I felt like I was stuck in a loop. I felt like I was constantly having to “reset.” I’d been doing the typical cycle of fixes, like, let’s do a cleanse, let’s do green juices, let’s do 30 days of yoga, let’s start meditating. I was just looking for anything to feel better. Alcohol was the quickest, easiest thing that would kind of resolve that in the moment. And the fallout was always horrible.

It’s a strong word, but for me, alcohol is poison.

It’s a strong word, but for me, alcohol is poison. It’s really such a depressive. I’ve been depressed. I’ve had depressive episodes. I don’t need more of that. It just felt like I was constantly in a cycle of trying to repair, and then I would fall back into it.

I had two women friends who I was talking to about it and they suggested that I try not drinking entirely instead of moderation. That was good. It was helpful. I did some AA, I went to meetings. There's a great community of women in New York who are part of that program. I did meet people and make friends there, which is great. I think there’s such a range—black to white, gray in the middle—of addiction. 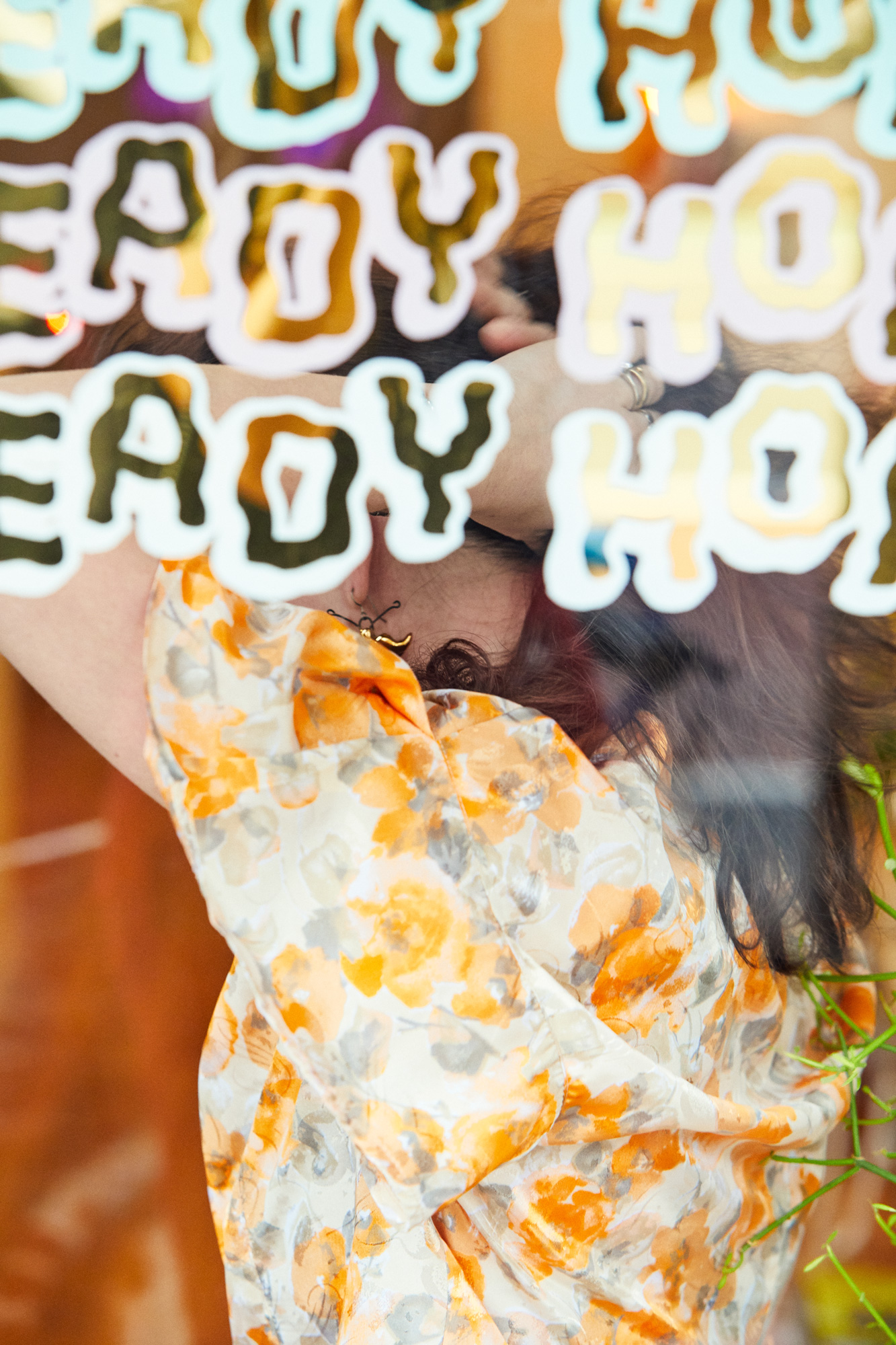 It’s only pretty recently that I’ve started to bring cannabis back into my life. Really only in the past six months, with the store being open. Alex was using cannabis throughout the time that we both stopped drinking, and so for two years or so, he was smoking weed and I was not. We were talking about opening the store, and there were all of these moments in these conversations where I was like, “But I don’t smoke weed!”

Alex was really supportive and encouraging throughout the whole thing. He was always just like, “You know, it’s not really about that. We’re doing this together. And just because you don’t smoke right now doesn’t mean that you’re not qualified to open a business.” He’s good at reminding me of stuff like that.

Sobriety is one thing to one person, another thing to the other. I think I’m still working through that. There are no rules, per se, in one’s own life. It’s been good to give myself time. I’m inherently so much more of a rigid person than Alex is. I’m structured, and I like systems and patterns—you know, figuring out puzzles and solving things and getting to the bottom of stuff. Alex is always there to be like, “But there might not be a bottom,” or, “What about over here?” And thank god for that. 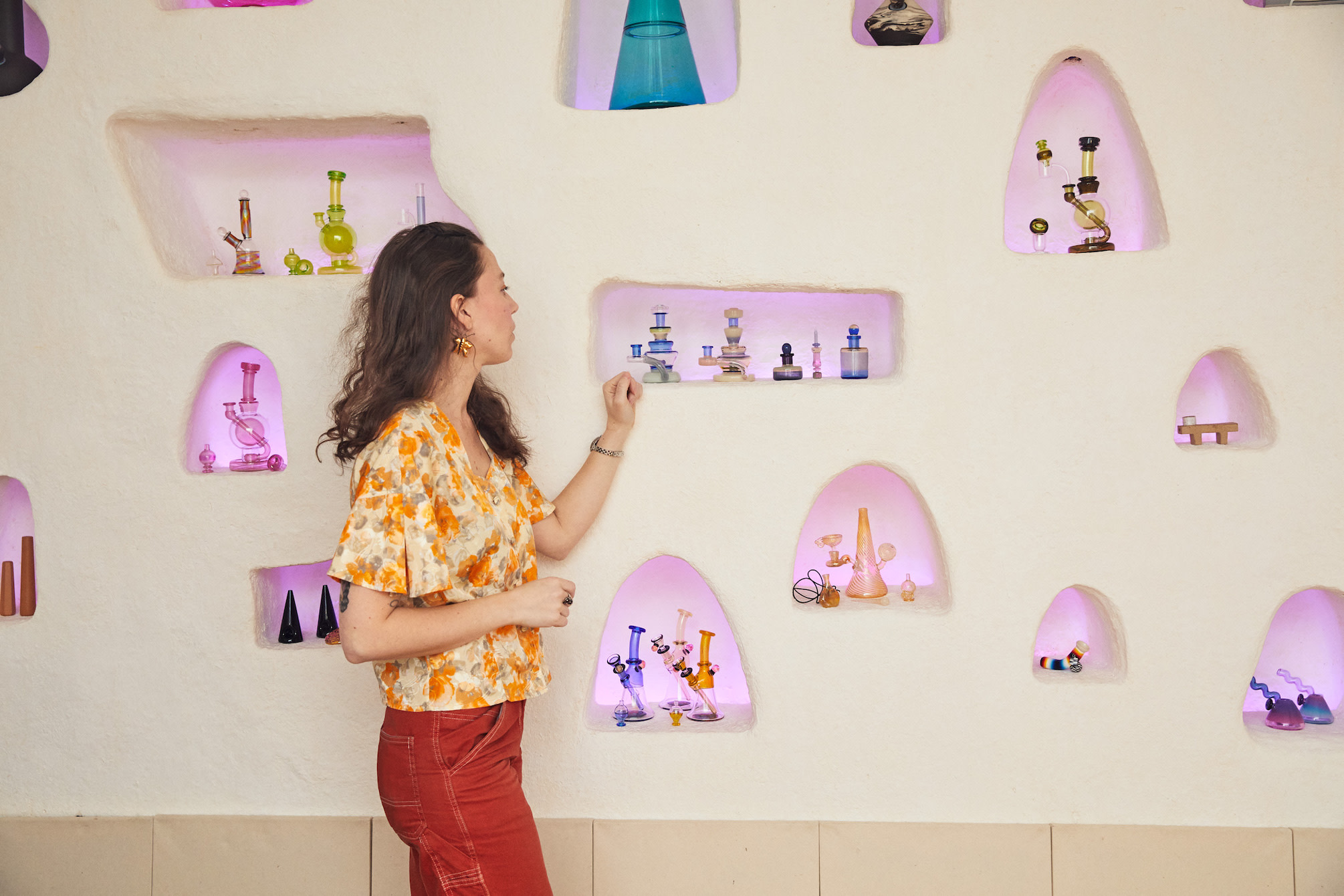 The private prison industry as a whole is a major issue this country has to figure out as soon as possible.

I really saw how much weed helped Alex through his recovery from drinking, and that spoke volumes to me. Even more broadly, it was just so clear that the kind of hard partying lifestyle that we were living and surrounded by—he was a bartender for years and years—really stood in contrast to the social engagement and introspection and creativity and life-affirming qualities we found in cannabis. The community of friends, acquaintances, and people who came into our lives after our drinking phase started to wind down so clearly reflected the quality of life that I was wanting. That definitely helped me to understand why I was gravitating towards starting Alcove. And I also just wanted to build something together, and for myself.

Alcove was a real opportunity to create something in a way that I hadn’t for so many years after not making paintings. I’ve always loved making things, whether that meant a piece of art or something bigger, like a space. When I worked at the art book company, we did pop-ups at Art Basel in Miami, and you have three days to create this space, with a few hundred thousand dollars worth of inventory and hundreds of boxes arriving on pallets. That just gets me going. The opportunity to do that again was really enticing, and to do it for ourselves rather than for someone else—it didn’t take much convincing.

Equality within the cannabis industry is something that anyone who’s working in this space is hopefully thinking and talking about. Proceeds from our O.C. lighters go to National Bail Out, an organization that helps women of color—particularly mothers—get bailed out and return to their families. The private prison industry as a whole is a major issue this country has to figure out as soon as possible. 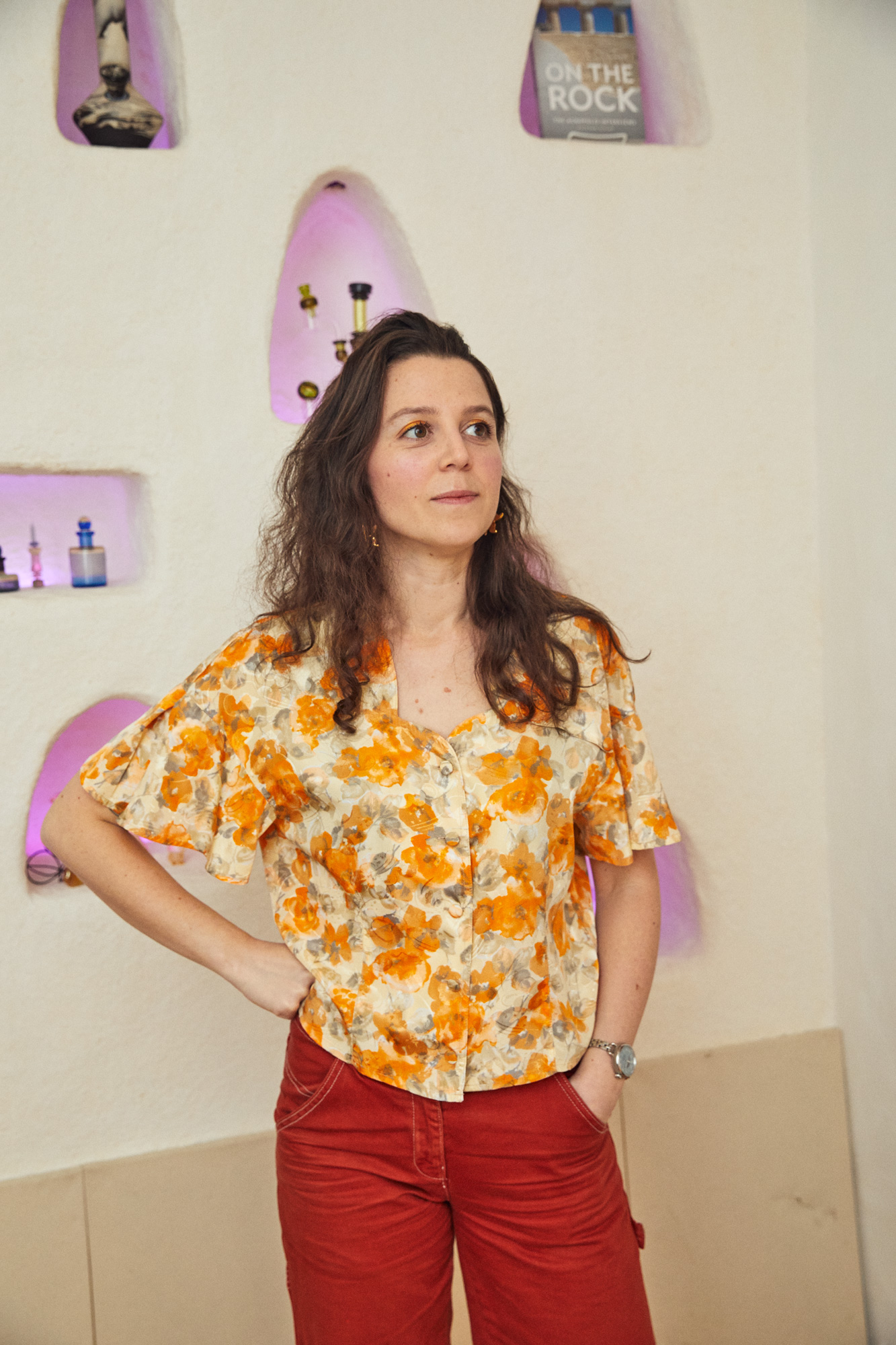 I do administrative stuff, and Alex is more like the face of the business. He does the physical work of taking care of the store and making it look really good all the time. But it’s really about us being these polar opposites—that’s just the nature of our romantic and personal relationship as well. He represents a funky, hippy, more typical stoner figure, and I’m more of a person who appreciates minimalism, abstraction, maybe more of the functionality and less of the decorative. He’s a daily smoker. I’m not. I think that informs the way that we run and stock the store and connect with different customers, too.

I just sold one of my favorite pieces by Jennifer Wilkinson. Her pipes are unique because they use a combination of materials in a way that I haven’t seen before, certainly not in smokeware, where the base is ceramic and then the exterior is a super colorful polymer clay. She can make something that is highly functional because of the base and then super decorative, on the other hand, with the exterior. We’ve sold a lot of her work. 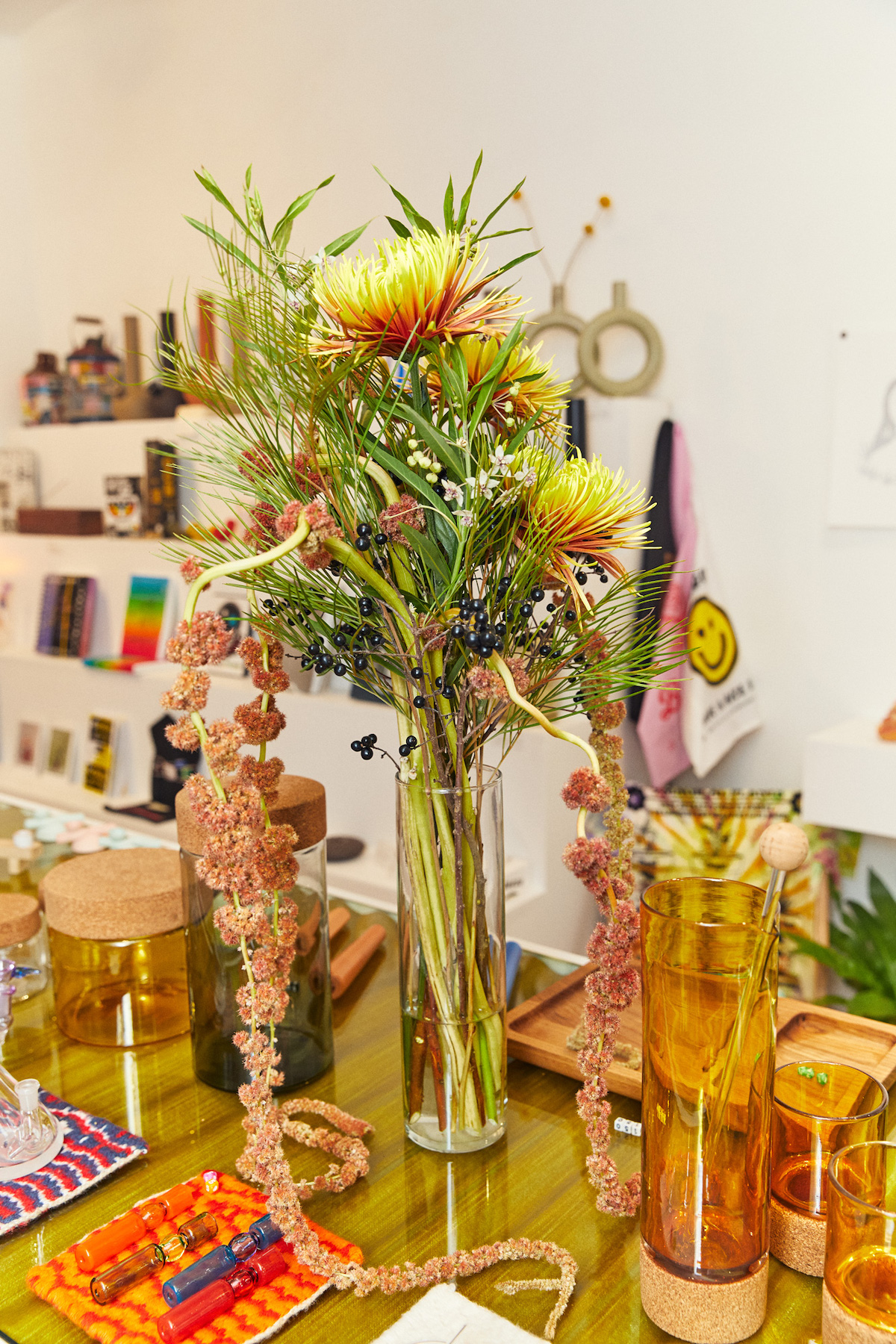 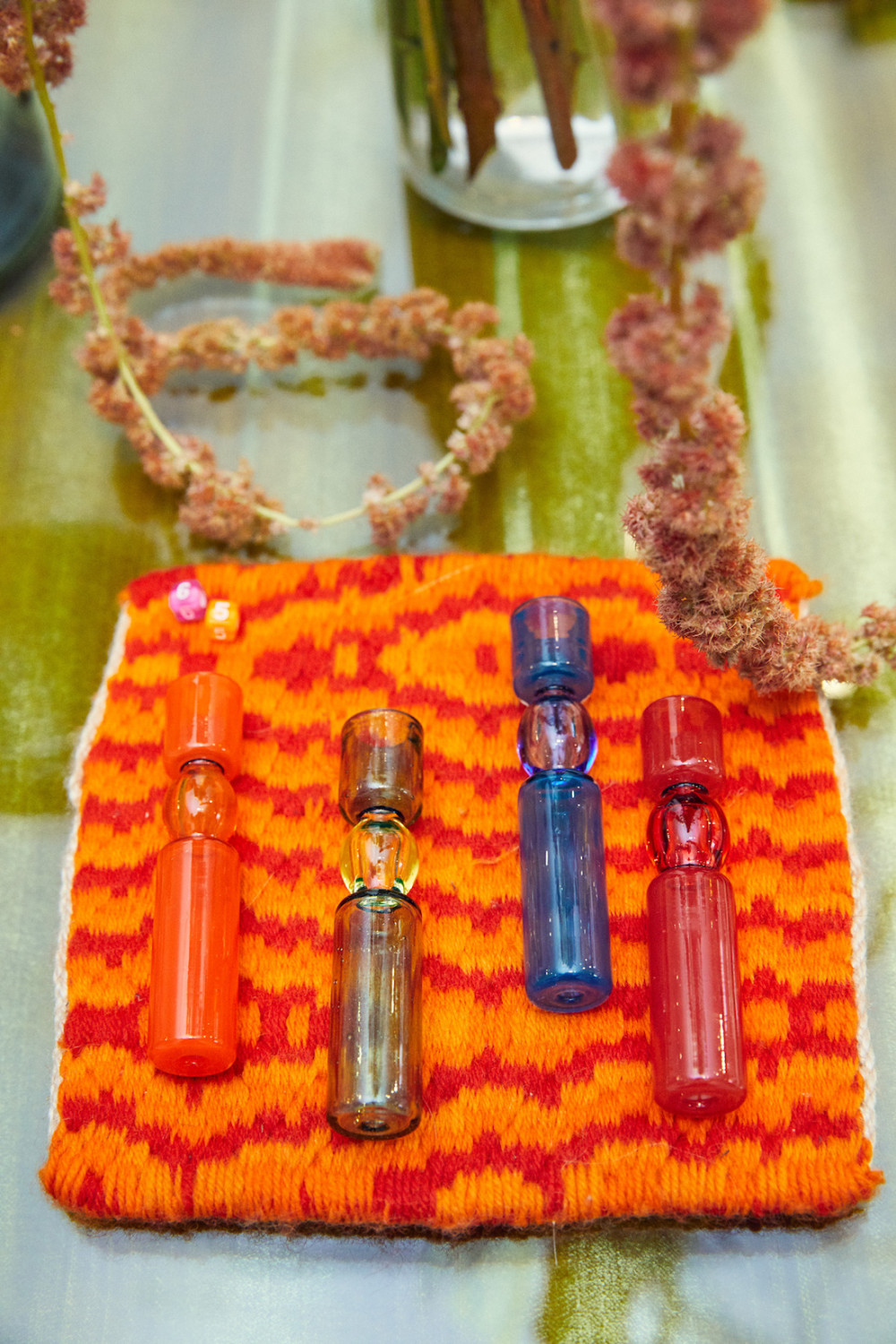 Gary Bodker makes the bubble bong, which is one of our bestsellers. It’s really simple—very playful and not very structured or formal in its execution, per se. It’s nice and heavy, but it’s such a good size that it fits in your hand. It’s got a lot of personality to it. He makes these cocktail sets as well, which are slightly more structured. The cork bottoms are hand-turned. They’re kind of like a built-in coaster. Gary is someone that I went to school with, at RISD. He’s actually expanding into home goods.

When customers ask for help, we can guide them to a certain degree. We ask questions like, “How often do you smoke? Where are you going to smoke? Do you want to be able to take it with you?” These are questions that can help pair someone with a certain piece. But ideally, they’re having a moment and they just fall in love with it. Those are really the most successful sales—when you’re holding something that just really speaks to you. 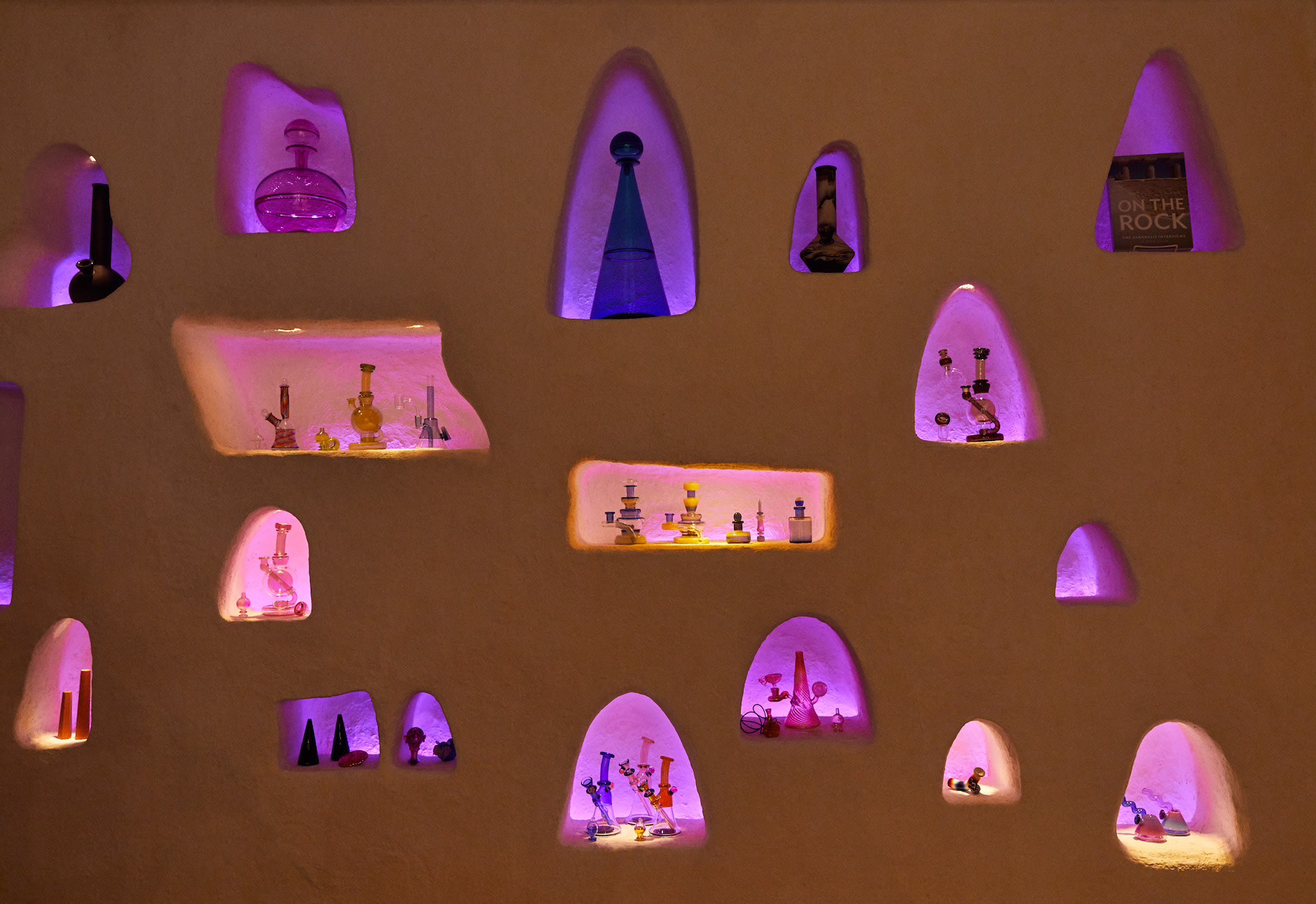 This interview has been edited and condensed for clarity. Allie Pisarro-Grant photographed by Meredith Jenks at Alcove in New York. If you like this Conversation, please feel free to share it with friends or enemies. 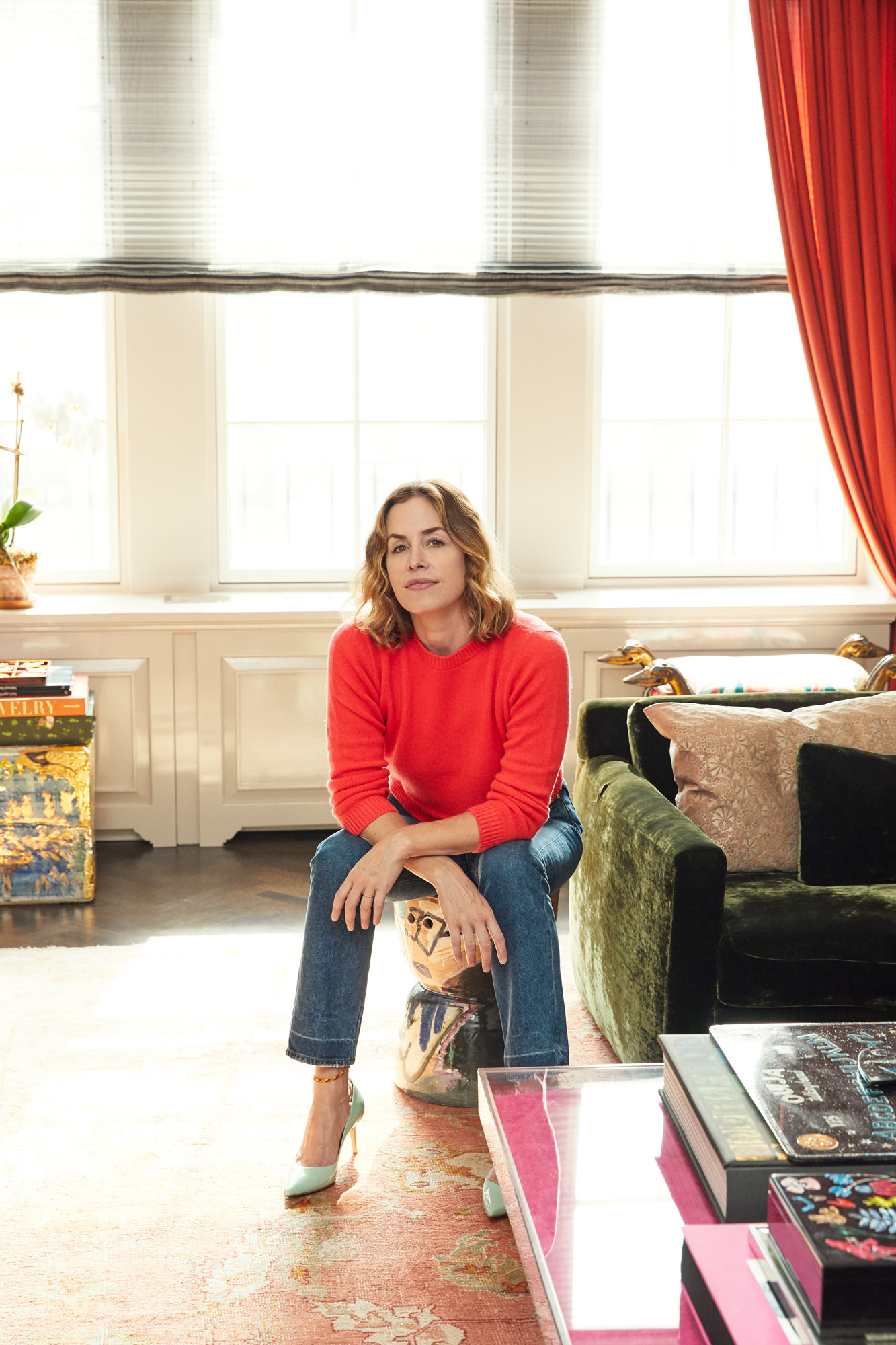 A new Dawn is coming.
Sign up to be the first to know.