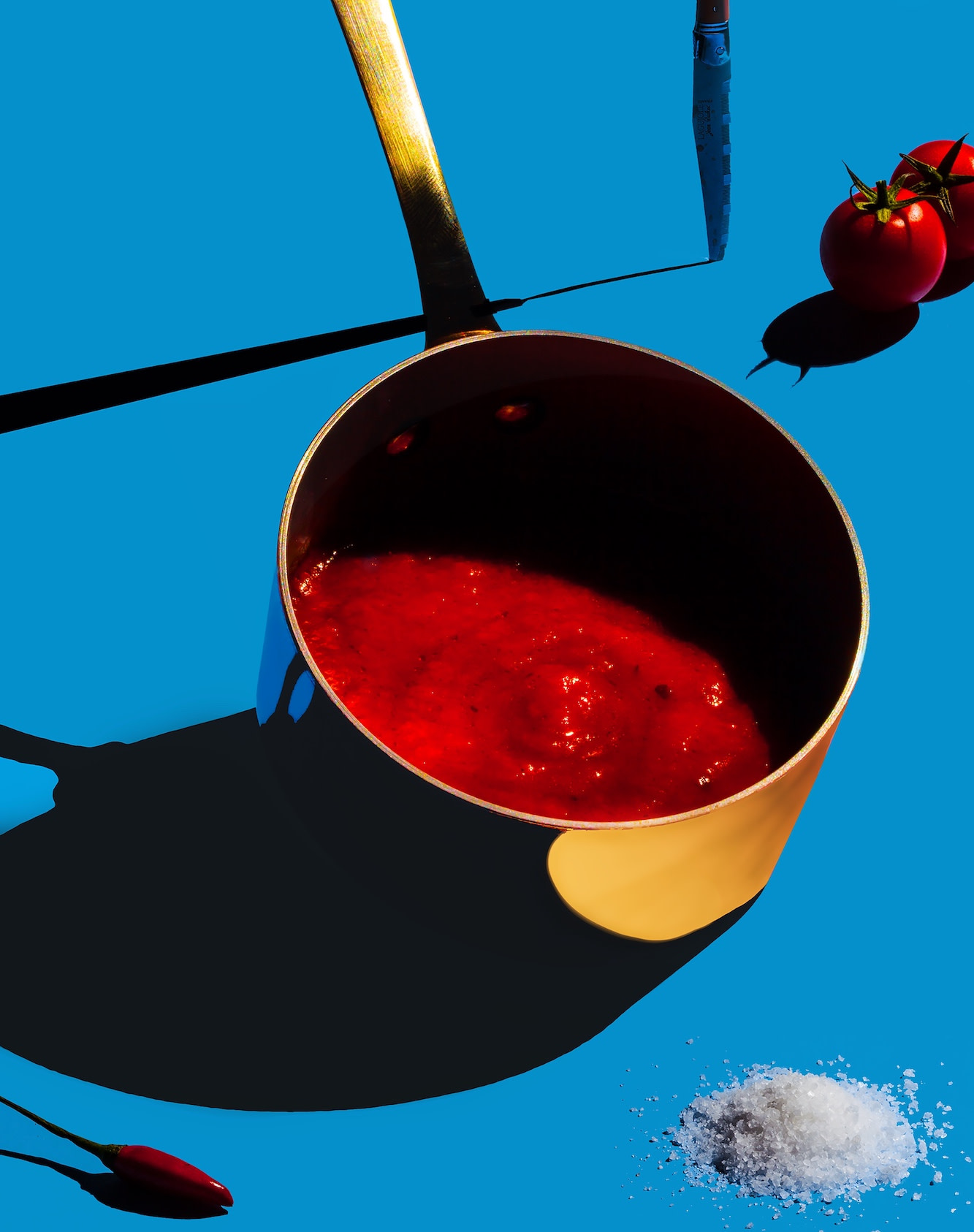 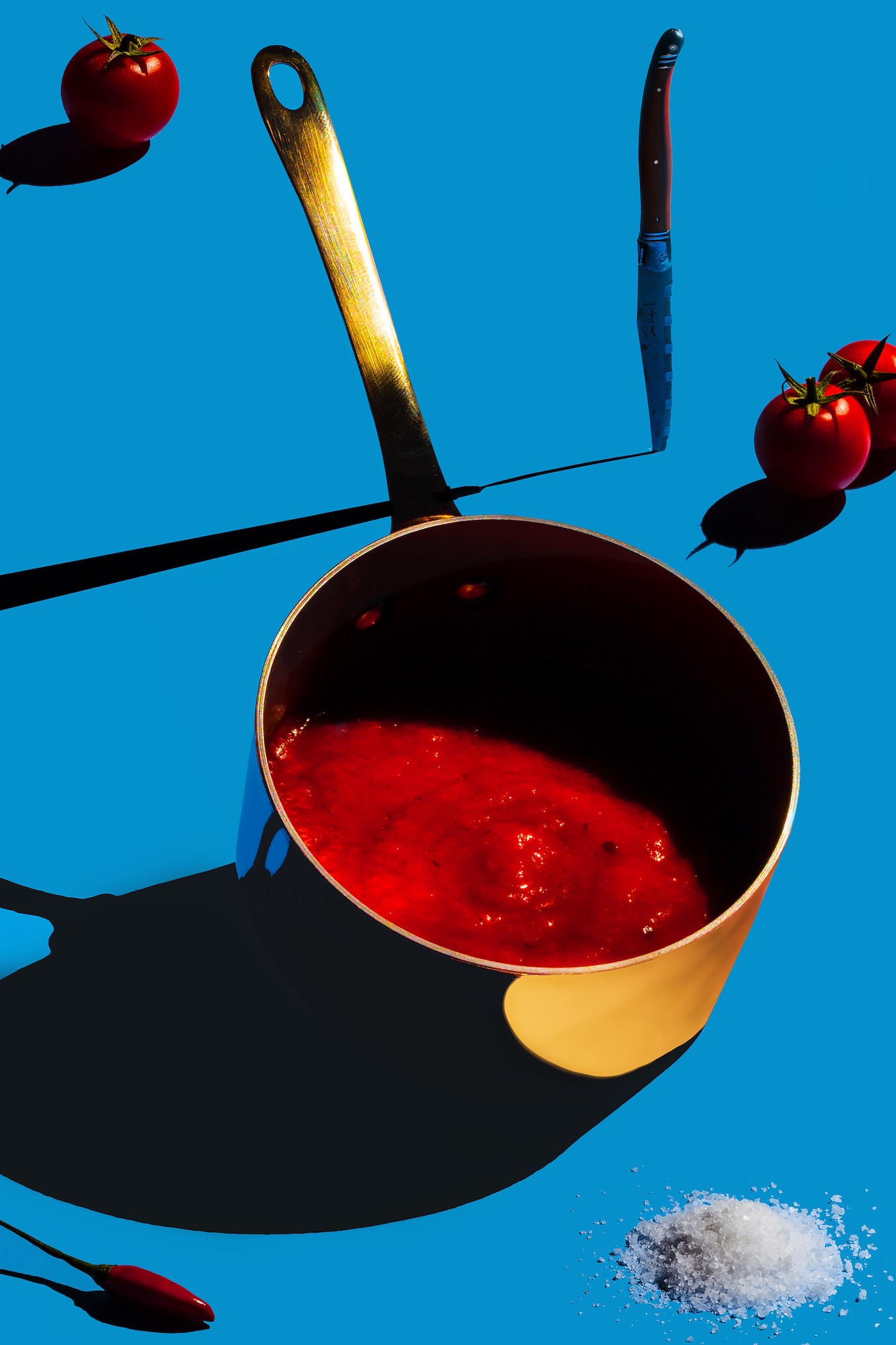 No Country For Old Menus

What makes a true American?

This essay originally appeared in Volume Two of our print magazine.

It was 1955 when a 31-year-old bride named Marcella found herself plucked from Italy and transported to Forest Hills, Queens, by her husband, Victor Hazan. She was a biology teacher who’d never cooked a dish in her life, but circumstance demanded she learn her way around the kitchen. A native of what is now known as the Italian region of Emilia-Romagna in the country’s northeast, she couldn’t stand what tried to pass itself off as Italian food in the restaurants of New York City, with tastes she didn’t recognize as the ones she’d grown up eating. So she picked up her husband’s copies of Italian food writer Ada Boni’s cookbooks and got to work.

Marcella Hazan went on to become America’s foremost authority on Italian cooking. She had a persnickety and acidic personality, and she pushed against stereotypes of Italian food with the scores of cookbooks she published before her death in 2013, just shy of 90 years old. In her 2008 memoir Amarcord: Marcella Remembers, she wrote of her distaste for “[the] so-called Italian food I found in New York at that time—spaghetti and meatballs; machine-made ravioli with pungent, dark tomato sauce; manicotti; lobster fra diavolo; veal parmesan or alla francese–resembled only occasionally in name, but never in appearance, taste, or intentions, what I had known at home.”

I reread Hazan’s words often, struck by the vividness of her writing. Through no fault of her own, though, I’m afraid to admit that my own mental picture of this America struggles to coalesce. The America she describes feels fragmented and alien to me, so distant that it is unthinkable.

I only saw the America she describes clearly for the first time when I watched Big Night, the 1996 film directed by Campbell Scott and Stanley Tucci (the latter of whom also stars). Now over two decades old, Big Night belongs to the same family of quintessential “food movies” as Tampopo (1985), Babette’s Feast (1987), and Eat Drink Man Woman (1994).

Films of this genre are characterized not just by their topical fixations with the subject of food, but their treatment of food as characters. These films are engorged with lurid and near-pornographic shots of spreads of meals and the humans inhaling them. The term “food movie” is a useful designation but, like most labels, it can also feel burdensome, as if to suggest that the intrinsic worth of these movies is only in their ability to commit the ephemeral pleasure of eating food to film. They give a sense of permanence to what is, by nature, fleeting.

I first saw Big Night two years ago, just after the election, when it was screened at New York City’s Metrograph as part of a series regarding food on film curated by celebrity food personality Alton Brown. The film centers on two brothers who’d come from the central Italian region of Abruzzo, and settled near the Jersey Shore, where they own an Italian brick-and-mortar restaurant called Paradise. There’s Primo (Tony Shalhoub), the gifted and inflexible cook who refuses to bend to the arbitrary and unevolved tastes of the mostly white Americans he serves. But Secondo, played by Tucci, is more easily seduced by the promises of capitalism. He gazes at the restaurant across the street, a place called Pascal’s Italian Grotto, with longing and envy. Primo can’t stand Pascal’s; to him, that menu constitutes culinary heresy. “The man should be in prison for the food he serves,” Primo suggests of Pascal’s owner (Ian Holm).

It’s been two years since I first saw this film, but I’ve been thinking about it more these days, rewatching it on television whenever I get a chance. It’s something of a balm, though for reasons beyond its meditative, careful cooking sequences. We’re living in a time of political emergency, when the current administration has put immigrant lives in limbo. What makes a true American? It’s a moment when the precarity of the lives of immigrants, who do everything they can to mute their differences and assimilate, has come back to the center of cultural conversations.

These are the conversations I’ve had with friends and peers who, like me, work in food, about the immigrants who shaped our current tastes regarding food, figureheads like Hazan or Lidia Bastianich, to name two Italian women whom America was willing to listen to and learn from. In examining their stories, I’ve been asking myself: who slipped through the cracks? Who were the people before them who were ahead of their time? Who were the immigrants America wasn’t ready for?

Primo prepares his food with crippling passion, honoring tradition more often than he deviates from it. As a result, his food is more readily misunderstood than consumed. Though authenticity has become a fraught word in culinary circles over the past years—what standards determine “authenticity” when origins are so hard to pin down?—it’s what Primo strives for, straight from Abruzzo.

Big Night is so much more than a languid “food movie,” though it does succeed by those measures. The film has many sumptuous overhead shots devoted to cooking, the most famous of which, arguably, involves the private, patient preparation of the timpano. The timpano is a crusty, drum-shaped pasta, browned like a Persian tahdig. It’s bulging with what Primo says are “the most important things in the world”: soft-boiled eggs, meatballs, penne, and gunky tomato sauce. There are shots of eggs exploding in pockets of flour, of pasta dough being cut, glazed, and rolled into tubes like small cigarettes. The finished timpano is the size of a baby orca, cut like a Carvel birthday cake whose scorched contents ooze from its center. Here is a dish that exclaims its magnificence. That’s what all of Primo’s food is, really: an attempt to construct paradise.

That name of the brothers’ restaurant, Paradise, reads like a declaration—or maybe a bit more like a statement of intent, one that goes unrealized. Primo and Secondo want to conjure paradise, gastronomic and spiritual, through the food and experience they create in this restaurant. It’s a funny name, too, considering how much goes wrong in the film’s opening scenes. The restaurant is barely contained chaos: The kitchen sink can’t stop burping “Remind me to call the plumber tomorrow so I can kill him,” says Secondo. There are wobbly tables balanced by slips of paper stuck underneath them. And the two brothers sometimes can’t stand each other; when Primo insists on dusting his risotto with basil before sending it out, Secondo’s eyes nearly roll out of his head.

Most patrons don’t think the food’s anything special, either. Remember, if you can, a time when the only bowls of spaghetti Americans would eat were soaked with lavalike tomato sauce and studded with globular meatballs. This is the America that Primo and Secondo inhabit; their ambitions to serve pure, unadulterated food fall flat.

“Oh God, you got leaves with yours,” one patron says derisively to another upon receiving a plate of spaghetti dusted with basil leaves, no meatballs in sight. These diners can’t fathom the notion of a seafood risotto, made from arborio rice, with shrimp and scallops cooked with such vigor that the female customer complains she can’t see any of the seafood, though she hasn’t even taken a bite. The woman demands a side of spaghetti, thinking all courses must come with that.

“Who are these people in America?” Primo says, quivering with fury. He calls her a criminal, a philistine, before he begrudgingly agrees to make her some spaghetti. In a later scene, Secondo suggests cutting the risotto from the menu altogether. “If you give people time, they learn,” Primo responds.

“Well, I don’t have time for them to learn,” Secondo says. “This is a restaurant, not a fucking school.”

There’s no time for people to learn to mature their taste buds in the America of the 1950s, as other, perhaps more enterprising immigrant restaurateurs realized. Next to Paradise, Pascal’s across the street is a culinary clown show, frequented by a steady throng of patrons who delight in its garish ambiance. A scene early on depicts nothing short of a hellscape: the camera becomes dizzying and schizophrenic; the restaurant’s interiors are saturated in a pulsing, siren red; and there’s even an enthusiastic songstress signing in Italian with a thick, irrepressible American accent.

The owner of Pascal’s, himself an Italian native, goads Secondo to join his business, and he doesn’t want Secondo to dabble so much in this purism. “A guy goes out to eat in the evening after a long day in the office,” he says. “He don’t want on his plate something that he has to look and think, What the fuck is this?” He probably wants steak, Pascal suggests.“Give to people what they want,” Pascal says. “Then later you can give them what you want.” These are the cold, hard realities of the America of Big Night: to succeed, you must disappear into your food. You cannot make yourself known. Do not be different. Be like everyone else.

When I think about Big Night, Shalhoub’s sad, angry eyes flash through my mind. My heart breaks for Primo because he reminds me Marcella Hazan, horrified by the land he’d been told was a paradise only to discover otherwise. Here, I believe, is how the film defines paradise: the refusal on the part of both brothers, Primo especially, to compromise a culinary authenticity tied inextricably to their roots. What paradise looks like for them is a restaurant untouched by external pressures to dilute their own integrity, even if caving to those demands might allow them to succeed.

How many people like Primo did this country push out, I wonder—those who tried to speak through their food, only for their language to fall on deaf, incurious ears of a customer who just wanted a steak? Hazan worked her way out of that sense of displacement and triumphed; could Primo? The question lingers. I won’t spoil the ending, but the film is overwhelmed with melancholy by the time it reaches its final, wordless sequence. Big Night reckons with the impossibility of any reconciliation between authenticity and assimilation; it wrestles with the reality of failure.

Perhaps Primo and Secondo went home to Abruzzo, in search of a paradise they couldn’t create in a new land. In Big Night, paradise is fleeting, aspirational. It is like an object meant to be consumed before the body turns it into a memory. Paradise comes and goes as it does for so many immigrants in America even today—as quickly as a string of spaghetti disappears down your throat and into your stomach. 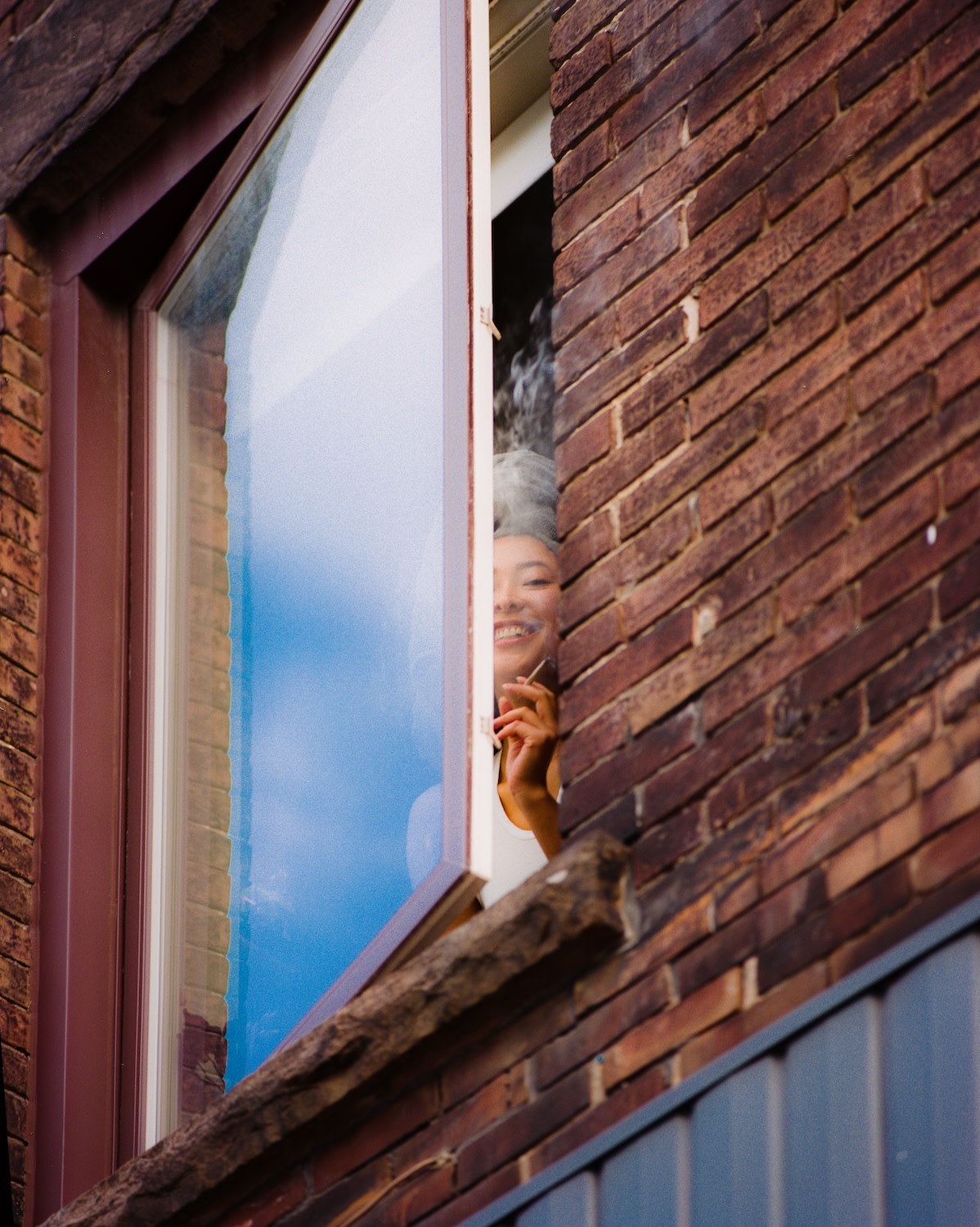