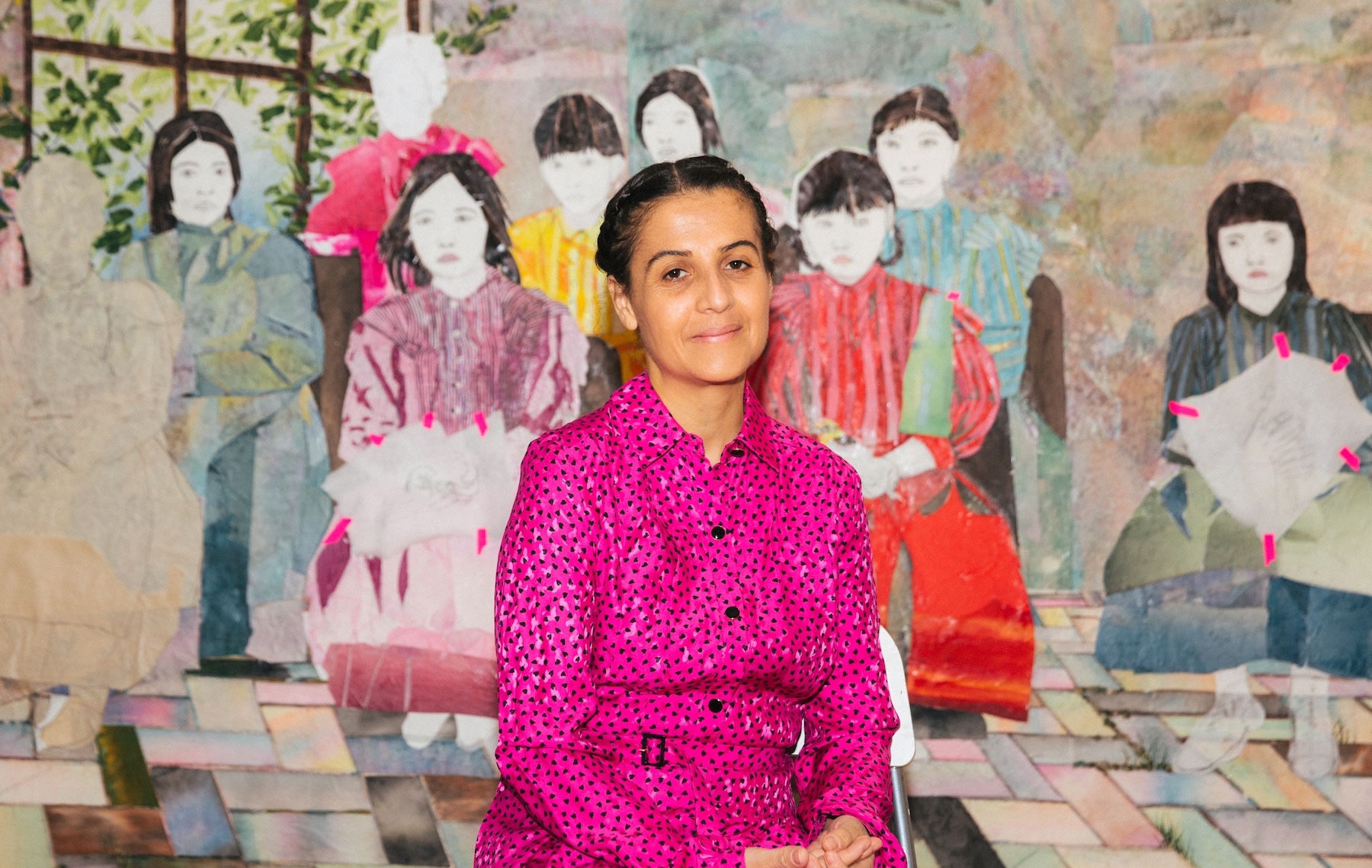 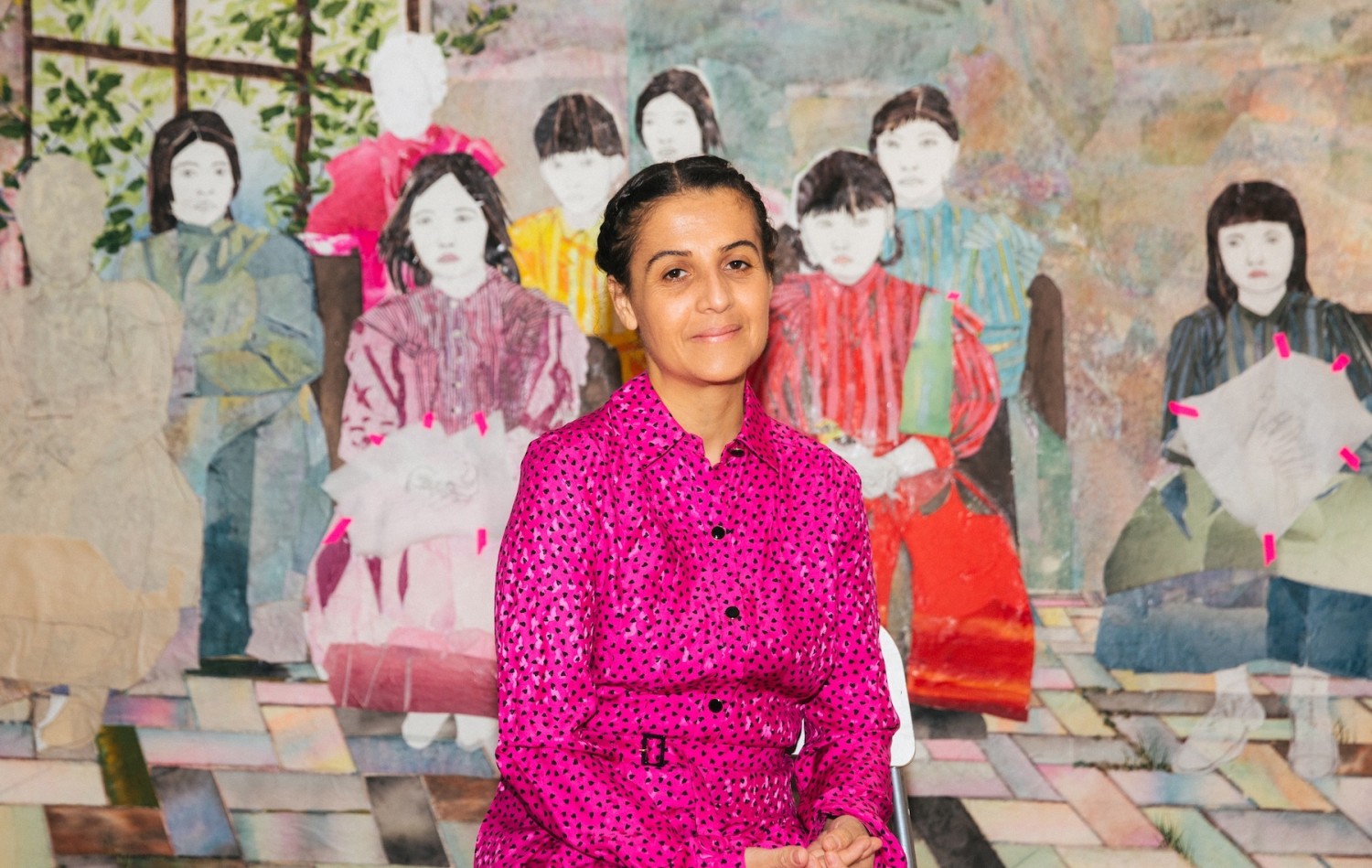 The Colombia-born artist on the physicality of collage, the influence of nature in her work, and one very crazy rabbit dream she had while pregnant.

As Told To Fiorella Valdesolo

I discovered the power that creating art had over me long before I had the idea to become an artist—long before I even knew what that meant. As a kid, I was extremely shy, and I was no good at school. I felt like drawing was the only thing I could do well. I didn’t have any teachers who wanted to help me, or who said, “You are visual. You like to use your hands—you should be an artist.” They just told me I wasn’t good. I felt very left out.

Drawing was how I communicated with the world, so I would always find a way to do it. I had hundreds of sketchbooks. I was very obsessive about it. Drawing became this standing thing that I did all the time. 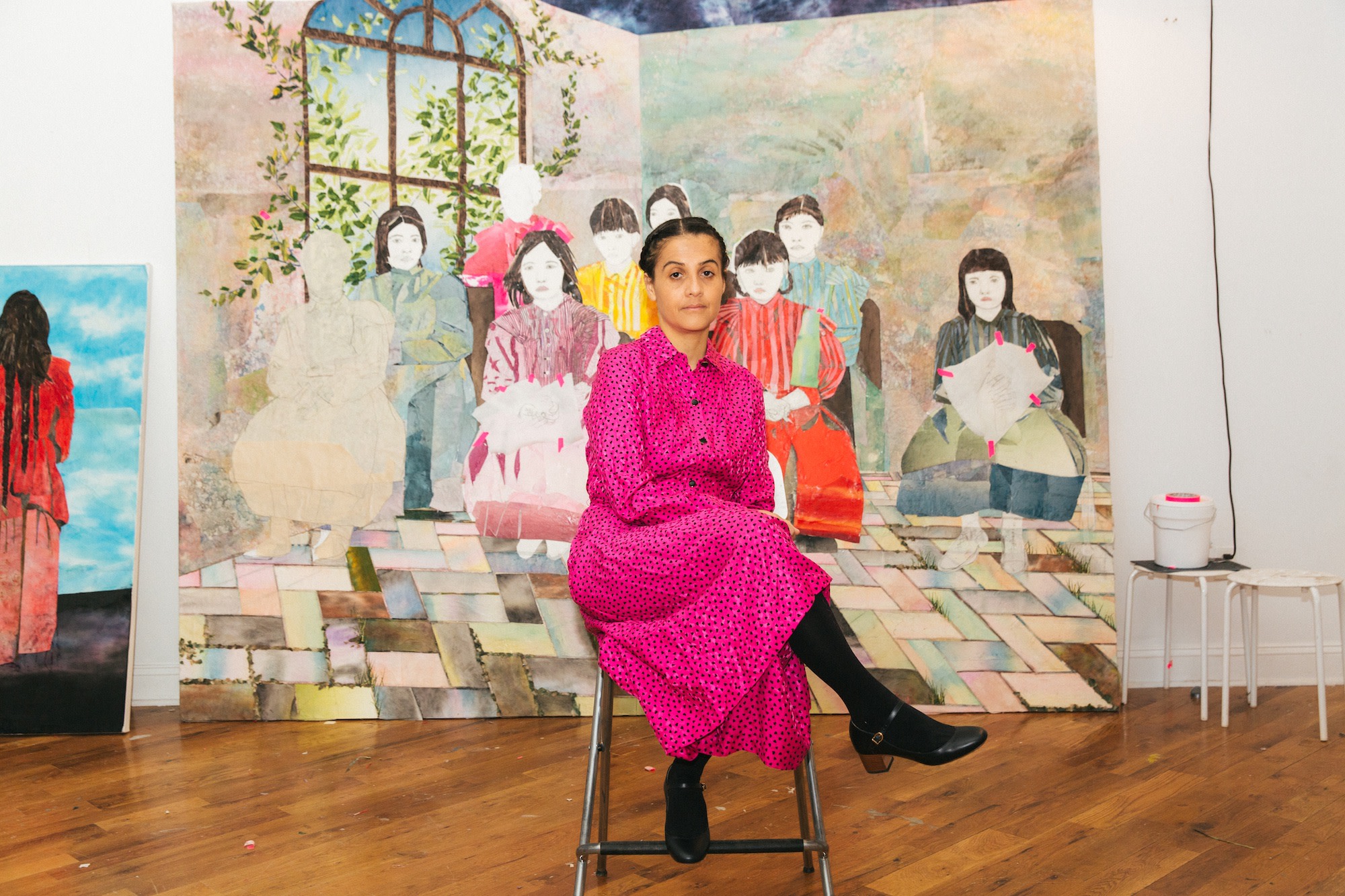 I grew up in the ’90s in Bogotá, which was not, to say the least, the best time politically.

Now that I have some distance from Colombia, I see how tough it was back then, but when I was there, I guess I just got used to it. I grew up in the ’90s in Bogotá, which was not, to say the least, the best time politically. The drug war and Pablo Escobar made it very dangerous to even go outside. There were always threats, bombs in malls or commercial places where friends would get hurt, and a lot of kidnappings. We didn’t have much freedom. As a kid, I remember my two brothers and I were always being told, “You can’t go there. You can’t do that.” I felt like I was in a cage.

My parents had a farm outside of Bogotá that my father built, and every weekend or when there was no school, my family would go there. We had lots of plants and vegetables that we grew and animals—sheep, cows, about 20 dogs. It was all surrounded by beautiful mountains. We still had to take precautions, but it was more peaceful. My siblings and I didn’t have the same restrictions and rules that we had in the city. We were given free rein in nature. Among the trees, my imagination was free to roam. It was awesome.

But I always wanted to leave Colombia. There were no opportunities unless you were from a rich family or had connections, and I didn’t want to be part of a system where you only advance if you have some sort of means. New York is hard and crazy, but you can find your way. New York looms large in the world’s imagination as the most reasonable place to do something unreasonable. Once I got here, I was scared of leaving. I thought, If I leave now, then how am I going to come back? I spent eight years without going home. I lost a lot of time with my family in Colombia, so it’s been a sacrifice, but New York was always an addiction for me. It still is. 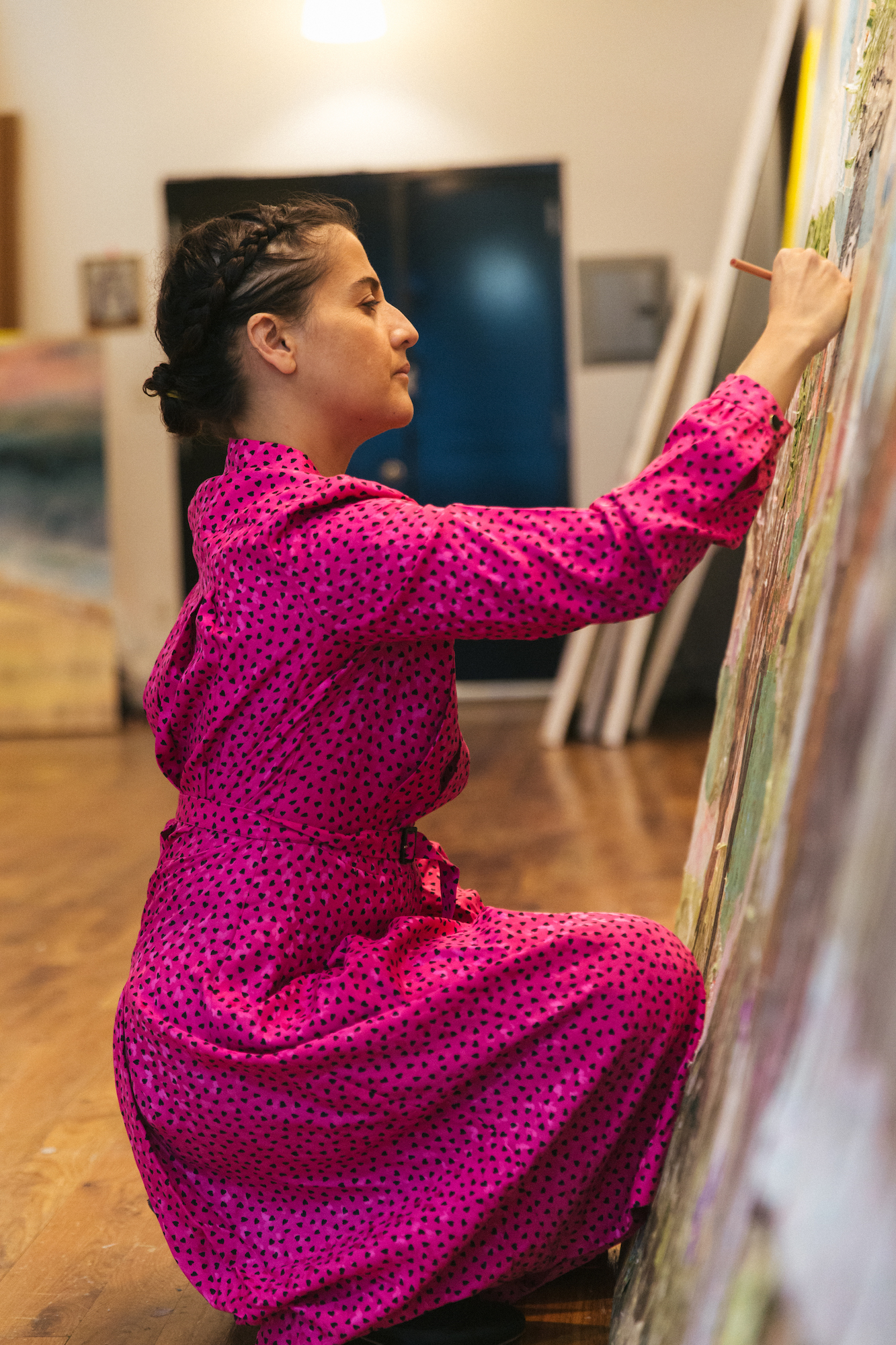 When I first moved here, I would go to The Met several times a week and spend hours sketching whatever struck me as interesting or beautiful. I was always looking at Degas; his ballerinas and horses are how I learned to draw movement. When I started at Parsons, I became such a nerd about school. The resources were just amazing. Most of the other students were younger and had this ugh, I want to be an artist attitude, and I couldn’t understand how anyone could ever miss class.

At the time, I was obsessively carving these 30-foot linoleum prints and writing a lot of terrible poems. Then, I went on to get my MFA at the School of Visual Arts, where I was making these really huge, very dark and scary charcoal drawings. That’s where I met my mentor, Judy Glantzman. So many students were focused on finding a way to be as new and experimental and innovative as possible, and instead, she encouraged me to just embrace what was inside of me. To draw, but not be scared about showing who I am in my work, and accepting the femininity of it . . . and even making that aspect more powerful. 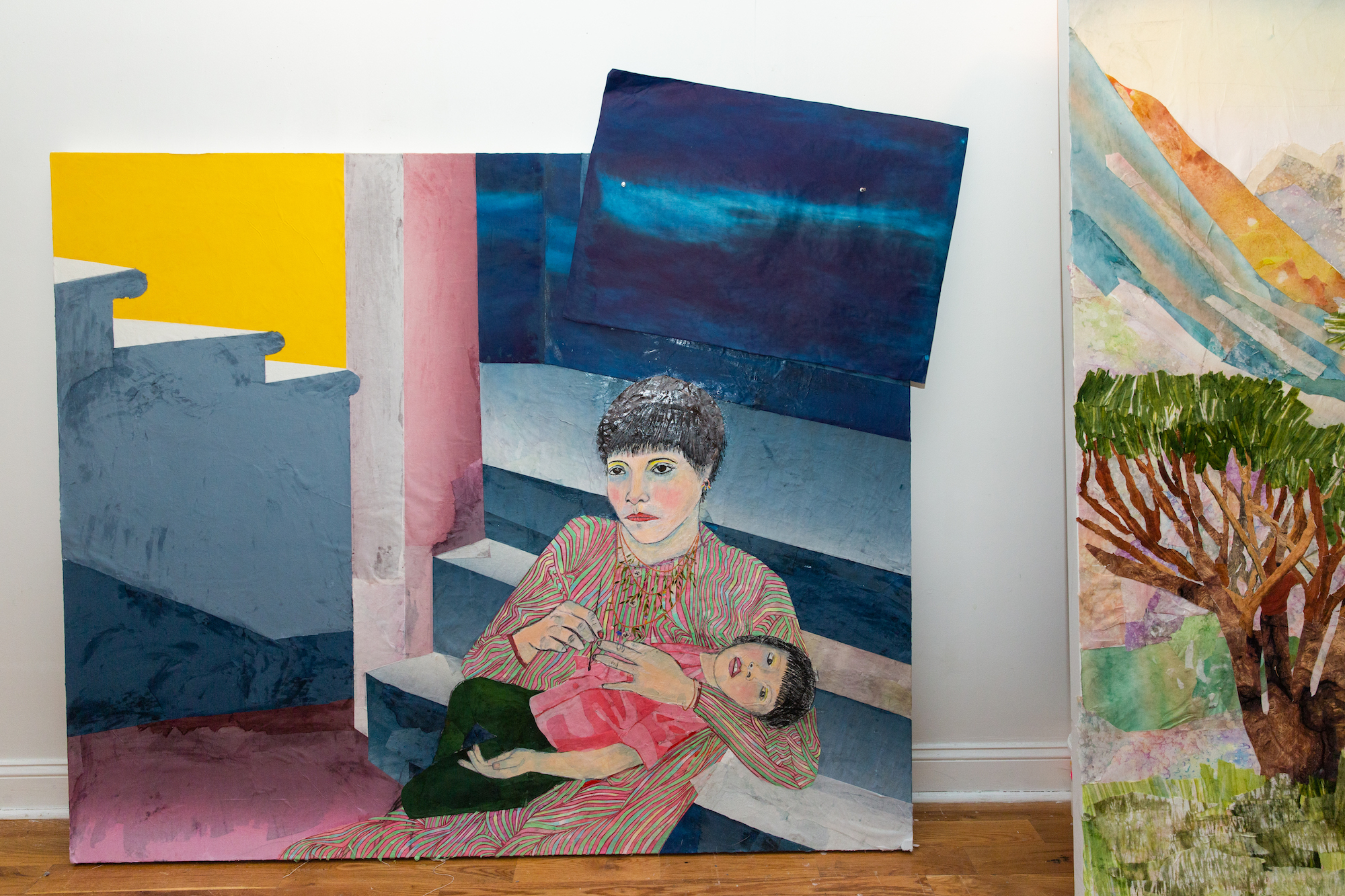 In my work, motherhood has produced a protective element. 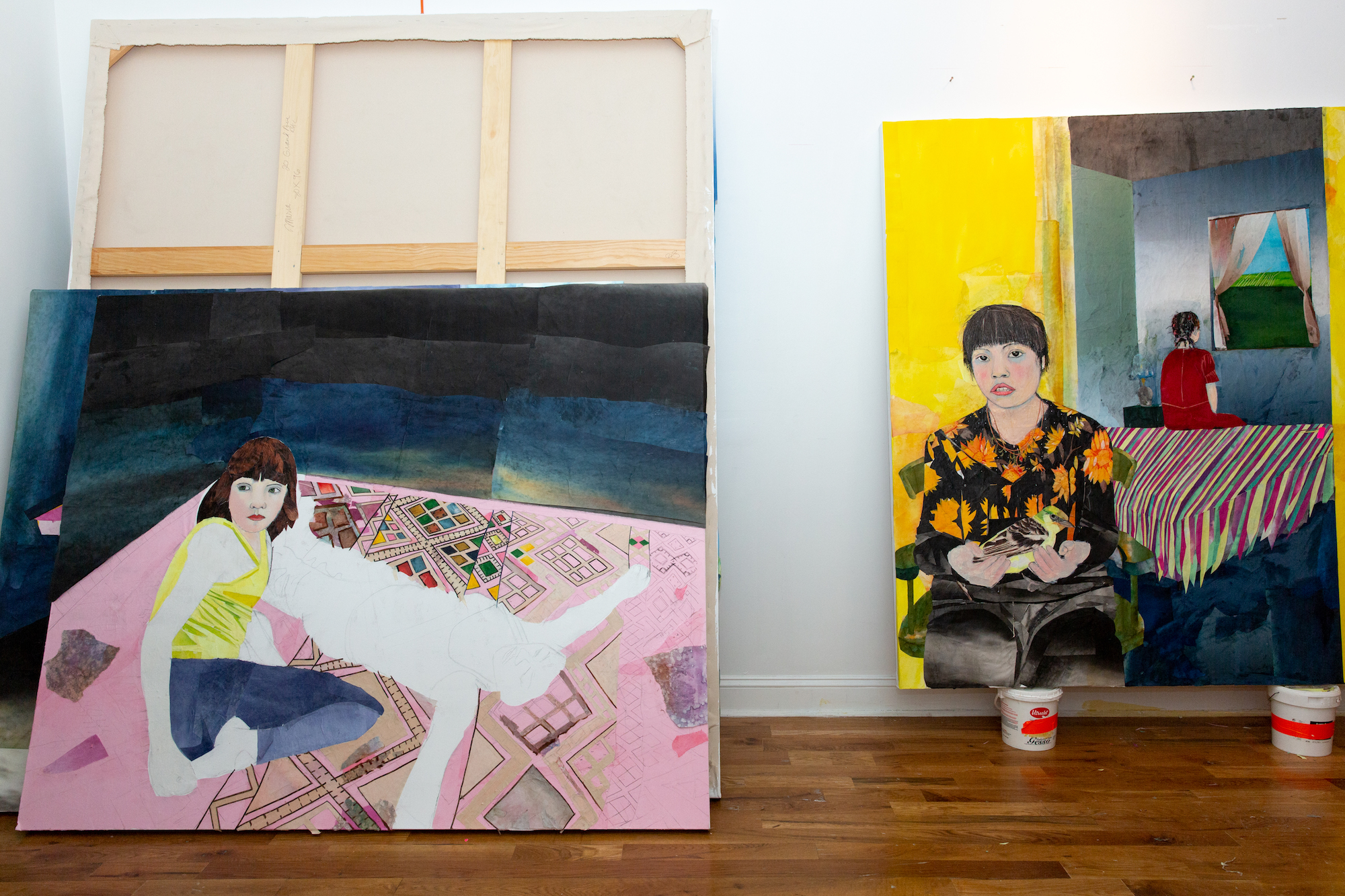 Being a mother has definitely changed my work. My routine is much more strict, but I think now I also have a bigger purpose. My son is so inspiring. It’s such a big love, and he’s brought a lot of good luck. In my work, motherhood has produced a protective element, and I draw my son into my pieces a lot. It’s such a deep connection, so when you’re doing something from your unconscious, it’s obviously going to come up.

Occasionally, dreams make their way into my paintings, too. When I was pregnant with my son, I had a dream where I gave birth to a rabbit, which my mother then put into a cage. Then, we all waited for it to turn into a human. Analyzing that one was a little too uncomfortable, but it led to me making a painting of women laying on the floor surrounded by rabbits.

I often dream about the paintings I am in the process of making—when my mind is still trying to work through the problems of a certain piece. There is a lot of cutting and gluing that happens in my sleep. At one point, I had started to draw a lot of patterns, and it reminded me of the patterns you see in Japanese papers. Suddenly I thought, I don’t need to draw the patterns, I could just glue them. That opened up a whole new world. 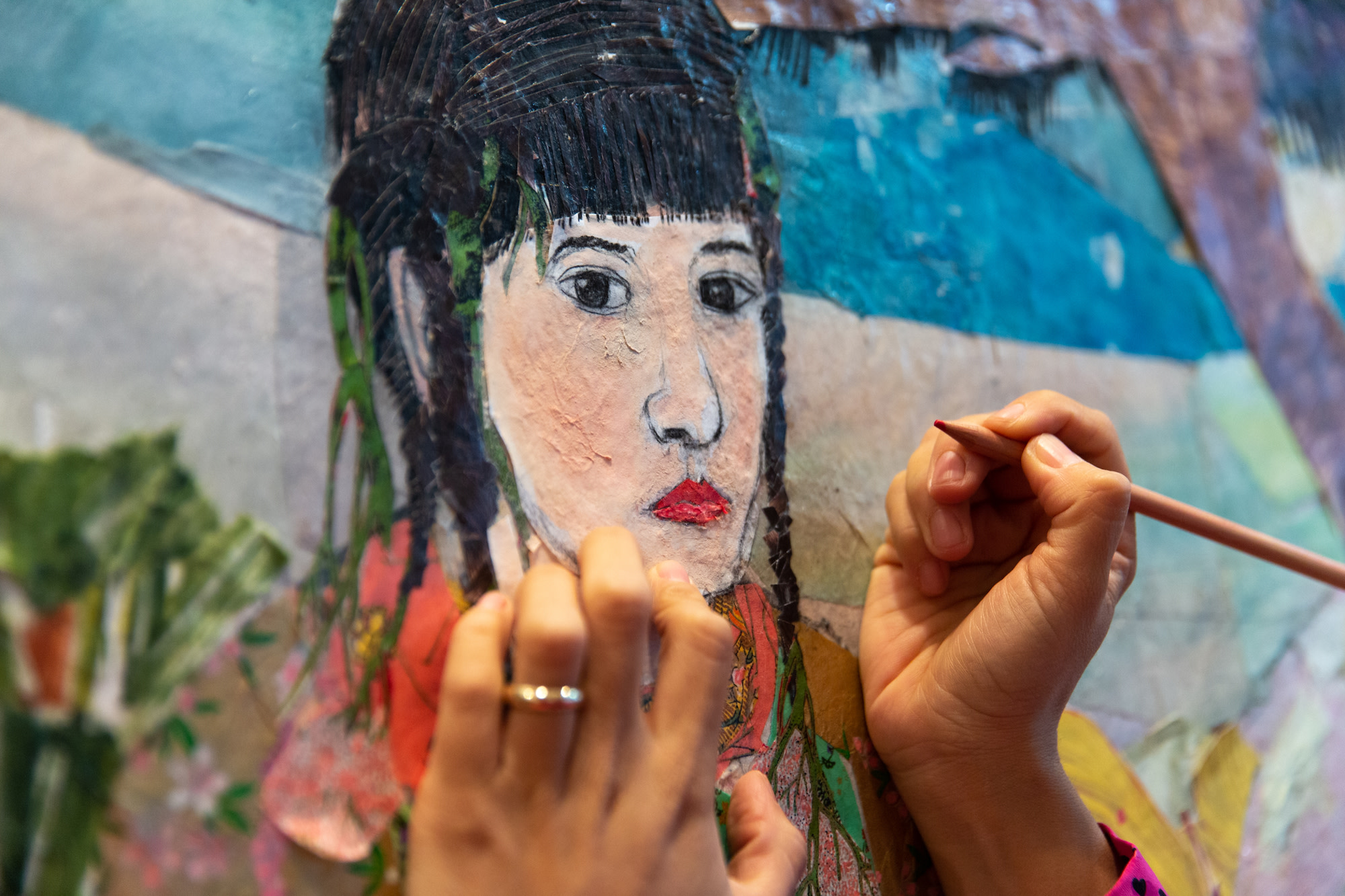 Collage is an extension of drawing for me. With drawing, the line provides infinite possibilities, and the same is true with collage. I just draw with scissors. I love the raw physicality of it. The tearing, forming, cutting, spreading glue with sticky fingers, feeling the various textures of the different papers. I get all my paper from a couple in Osaka that I actually found on Instagram. They have been paper fabricators for many years. We don’t understand each other, but their sixteen-year-old daughter speaks English, so she helps us communicate via Skype.

I start all of my works with a plan, but the materials usually turn that plan into an abstraction that must be flushed out and shaped. In the process, the materials have their own life, and the end result is often quite different from the original intent. With the paint that I use in my work, I find that the material controls me. With the papers I use, I find that the material surprises me. This is a dichotomy that is forever fascinating to me. At times, I feel like I’m excavating a mystery hidden below the canvas rather than creating a work on top of it.

Growing up in Colombia, everyone had a marijuana plant in their yard.

My emotions run very high, and drawing has always been how I calm down. Because of that, I don’t ever really drink. My husband says that when I do, I go through all the stages of drunkenness with one glass of wine. I’ve smoked weed, but I have crazy reactions—like, I think my ears are burning, or a building I’m in is going to fall down. Growing up in Colombia, everyone had a marijuana plant in their yard. You knew it was drugs, but there was no stigma—not like it is here. It was just normal. The attitude about weed here has changed so much since I first moved to New York. It used to be so taboo, and now I just see people smoking it on the street.

The sense of freedom that I equated with nature as a kid is probably part of the reason it shows up so often in my paintings. Living in New York, there’s a longing for nature, but at the same time, if I was in nature, I would probably be drawing buildings. I like that contrast. I go to the Museum of Natural History a lot to draw the dioramas. Because I don’t have a direct link to nature, I guess that’s how things turn a little surreal in my work. 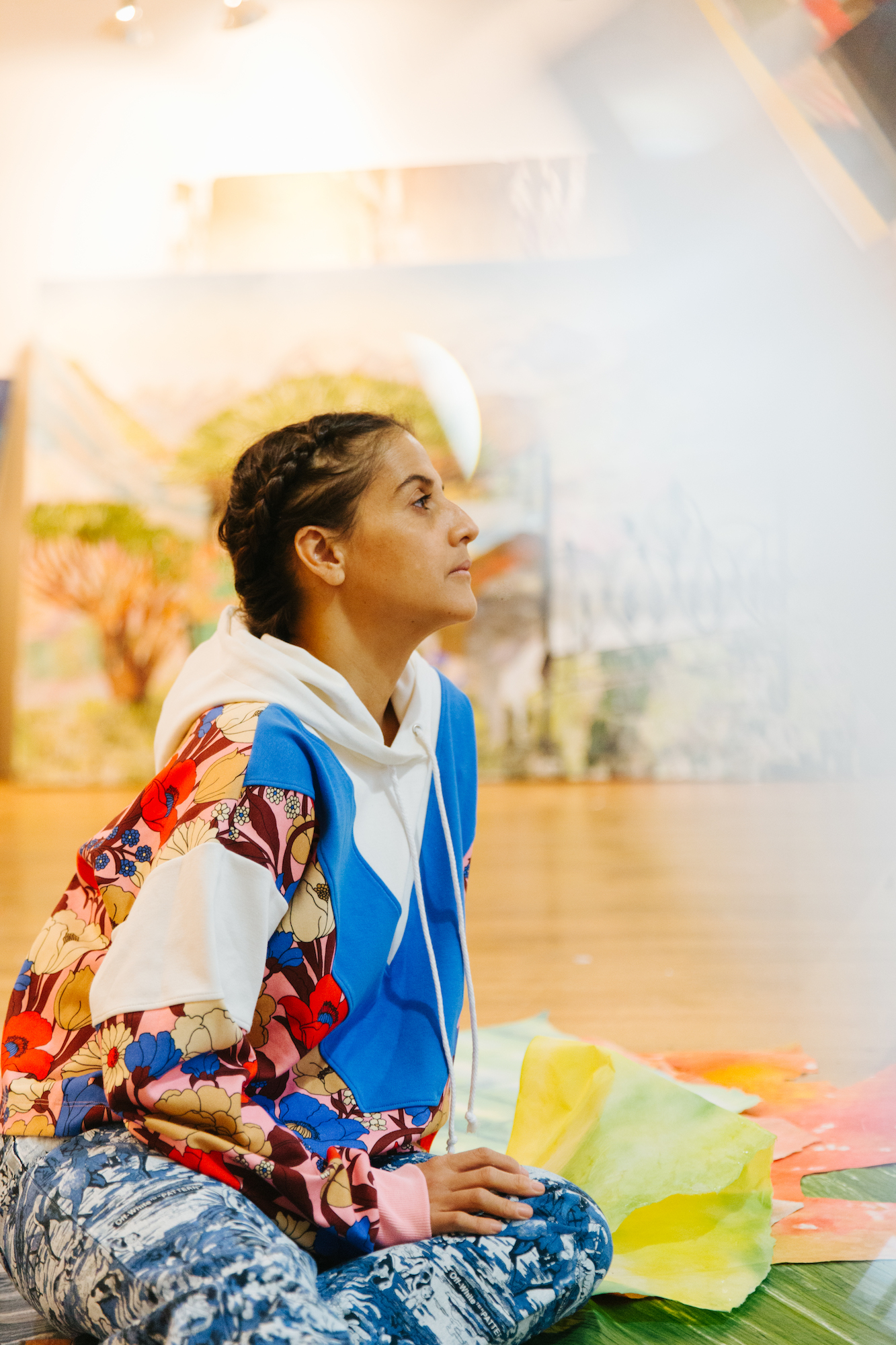 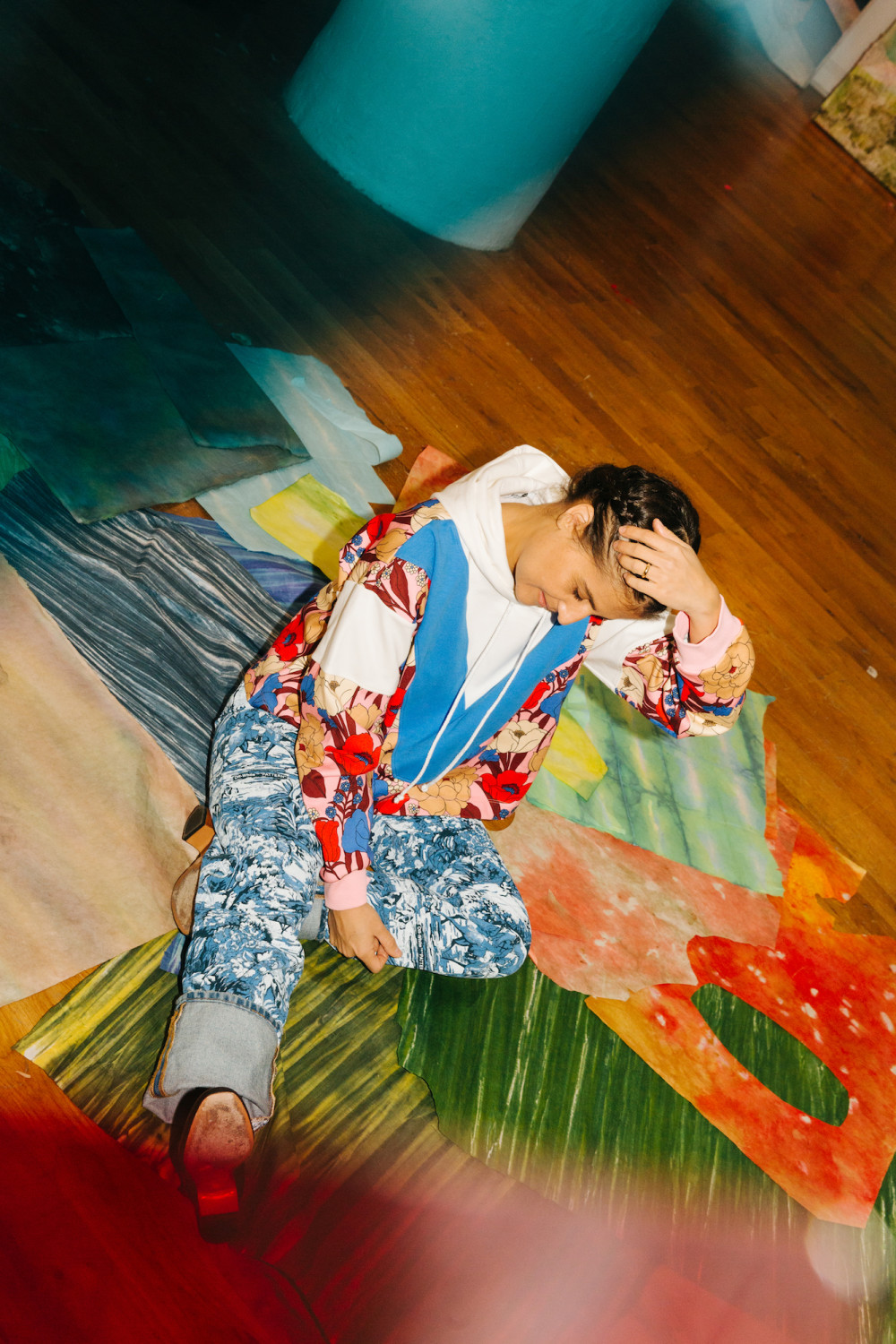 The series I’m working on now is comprised largely of interiors. Nature is kept at bay. I wanted to show women on a psychological threshold, and I wanted the nature to be imbued solely in the women themselves. I’m exploring themes of migration and creating these imagined utopias. I remember celebrating Obama’s first election at a bar and feeling like I shouldn’t be there, but the other people around me told me, “No, you are from here.” That was so powerful. Now, when I’m in the playroom with my son and they see I speak Spanish, it’s different. Things are more tense. I mean, it’s New York City—we are so open and so amazing, but you still feel it.

It’s hard not to think about all the people who are like you who are coming to the U.S.—or who wish that they were coming here—and who are not being treated like humans. And as a mother, I can’t imagine being separated from my child. The utopias I’m creating in my pieces are a reaction to that—a desire to create worlds that are beautiful and positive and that can hopefully start a conversation about what’s going on right now. I want to glorify the role of women during the crisis of migration, deportation, and transition. I want my work to reflect the humanity of these situations.

My family comes to New York sometimes for my shows. They’re so excited about my career and very proud. My dad is like a coach: tough and always pushing me a lot and asking me what I’m working on next. My mom will always tell me if she thinks something is terrible. But honestly, when she hates one of my pieces, and it makes her uncomfortable because it’s too weird—that’s how I know it’s good. 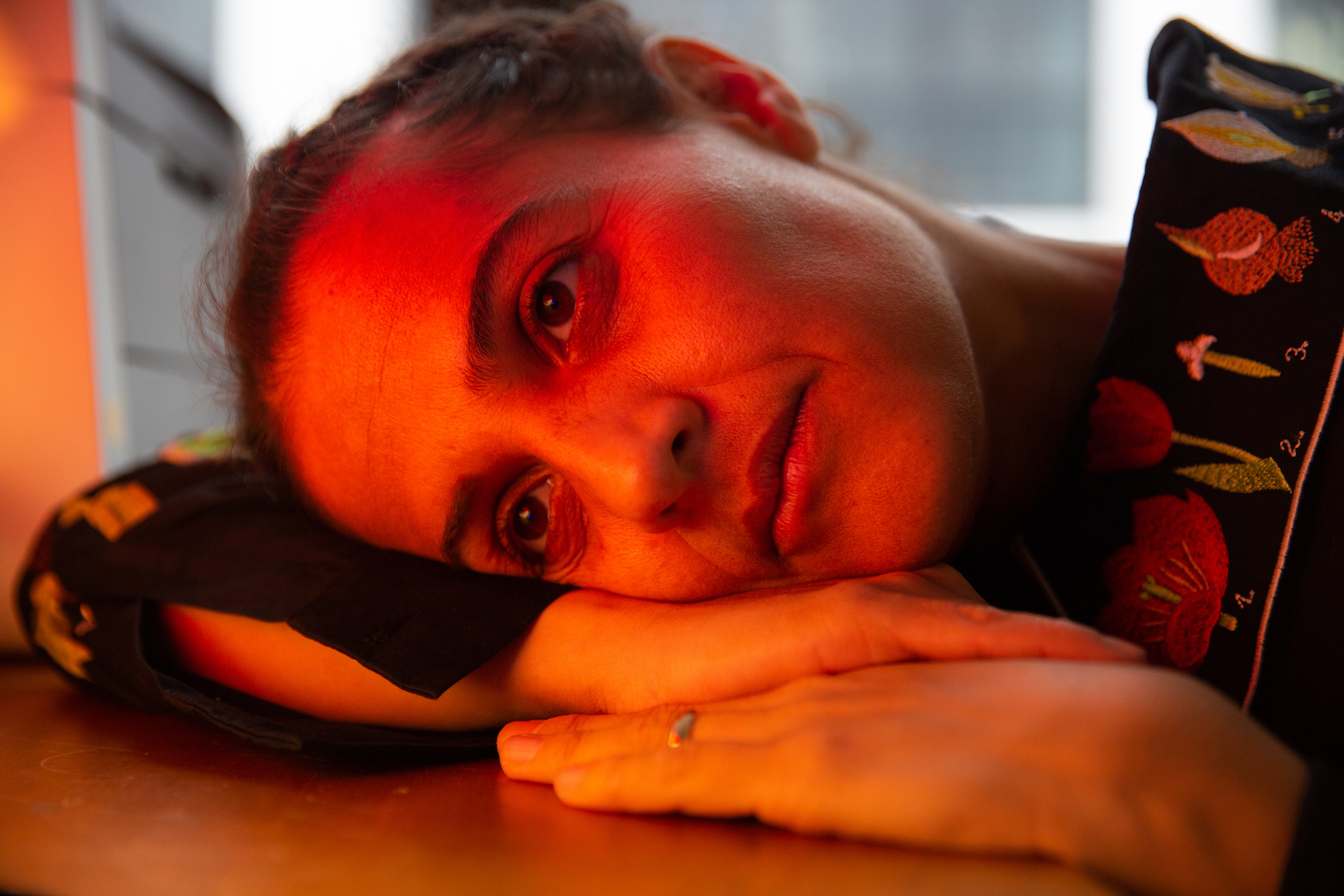 This interview has been edited and condensed for clarity. María Berrío photographed by Mengwen Cao in New York. If you like this Conversation, please feel free to share it with friends or enemies.