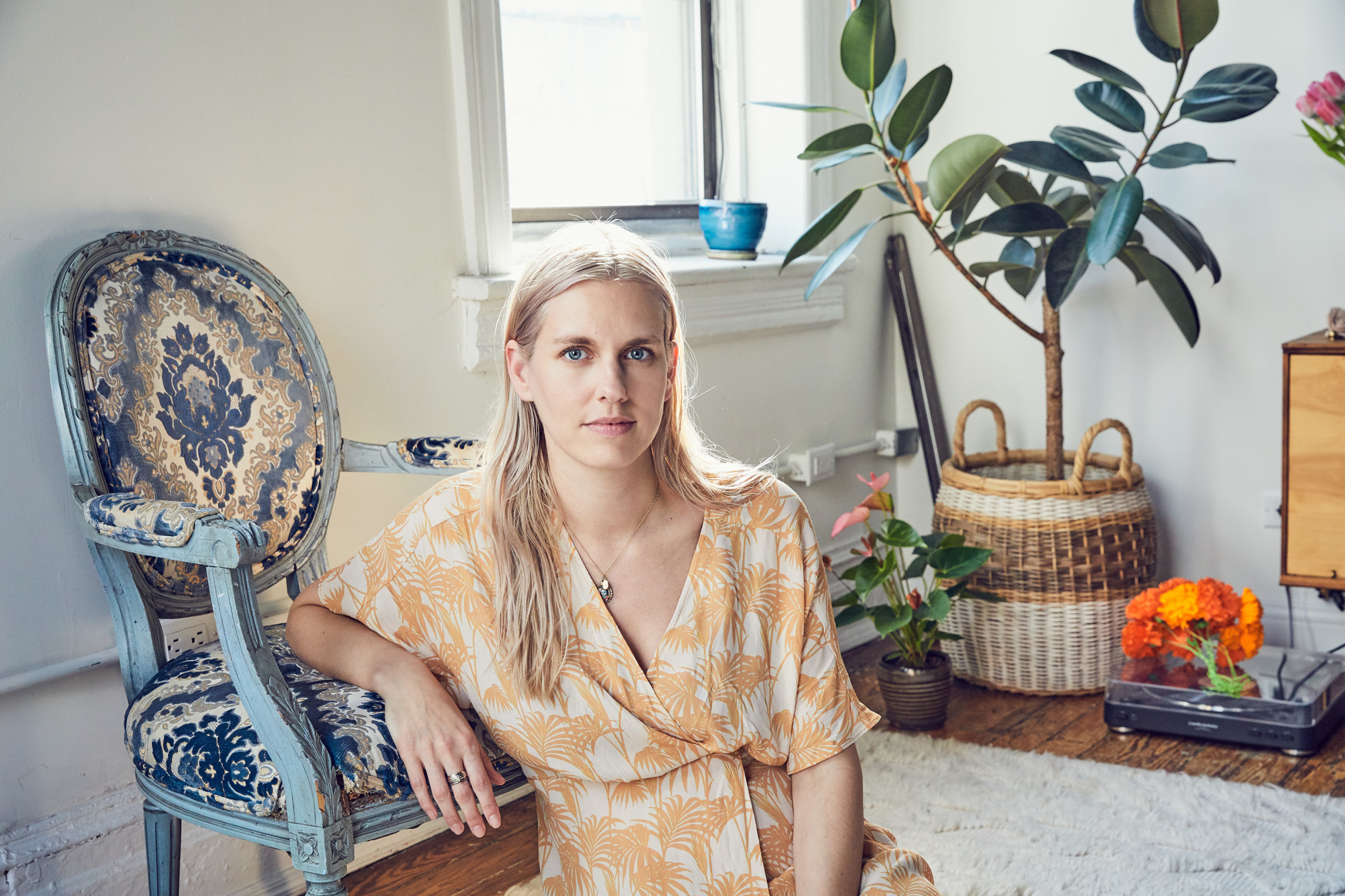 The founder of VEDA on running a small business, smoking CBD, and making tees for social good.

I grew up in Texas—San Antonio. I moved to New York for college, so I’ve been here for a while now. I feel like I've been saying the same number for a long time—15 years or something like that? I studied philosophy and religion. Not exactly a natural segue to being a clothing designer. I thought I wanted to go to law school but I graduated a semester early and got an internship at Yaya, a fashion line by Yael Aflalo, who also founded Reformation. She and I became good friends, and she was actually my partner on VEDA when I first started.

My internship really took me off course. I thought I was going to be done with it and go to law school, but Yael was like, “Nope, you’re moving to L.A.” She really gave me a great opportunity, so I moved out there for a couple years. Toward the end of my time there is when I started VEDA. My parents had a small business so I think part of it came naturally to me. Also being young and arrogant.

Growing up in San Antonio was great. It’s kind of quiet and sleepy in a lot of ways. Really family-oriented. I think I was always really conscious of the small business thing. I loved that my parents had the flexibility to come to my soccer games, but I also saw them work really hard. The business was kind of like another member of the family. 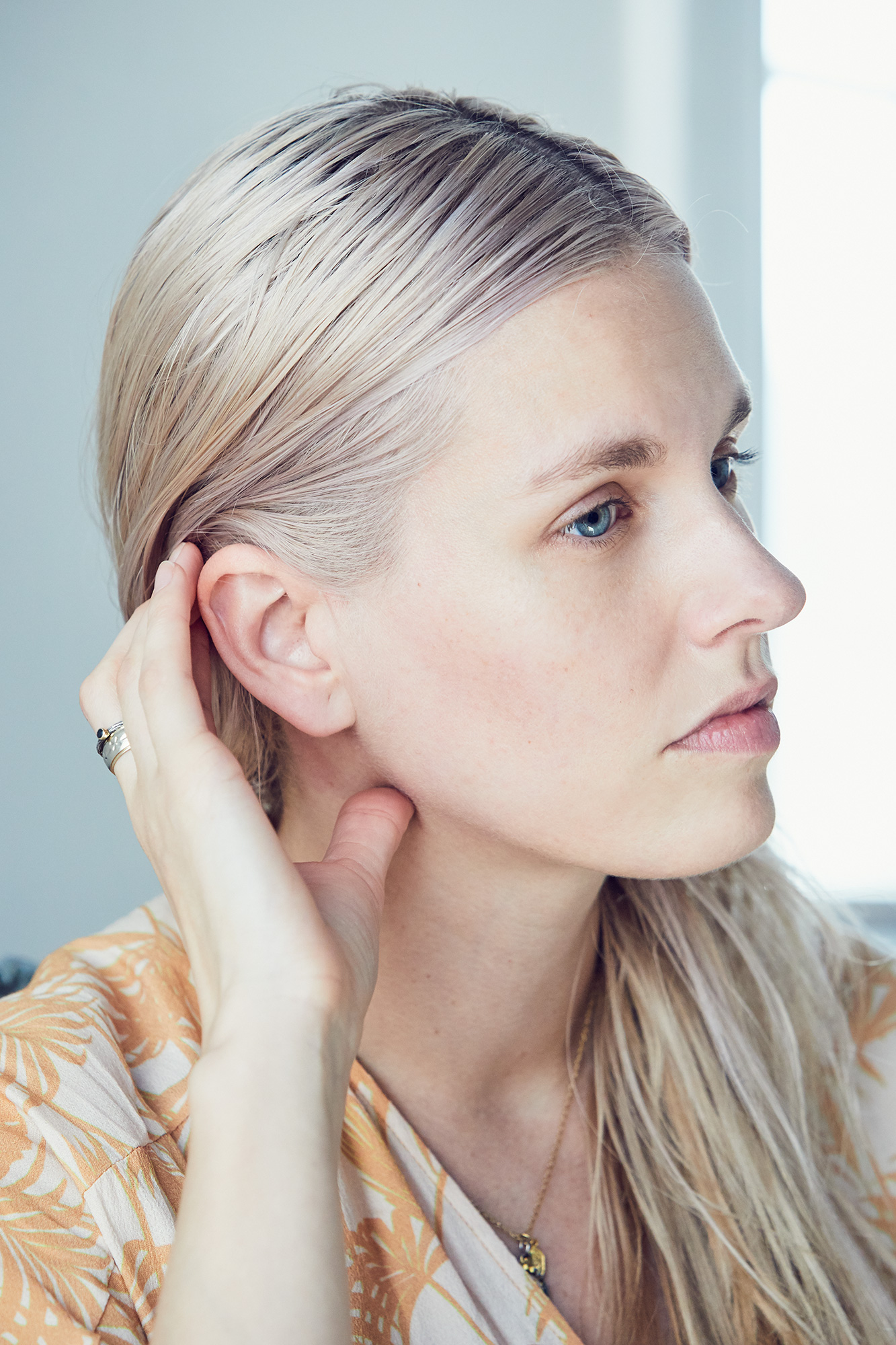 I didn't know what I was doing, so starting something that was really focused made it a lot easier to figure out the answers to all the other things.

I always had an interest in fashion, but more from a style point of view. I liked to go vintage shopping, I liked to rework things, I liked to pull stuff out of my mom’s closet and, you know, wear a skirt as a dress, or whatever.

I didn’t really understand anything about the fashion industry when I moved to New York. My internship was in a wholesale showroom, so it was kind mind-blowing. It was like, oh, this is how it works? People come here, nine months before the season and buy things at half the price and then it goes to the store? I had no idea. But I liked the marriage of business and creativity. It just seemed really natural.

I had a pretty positive early experience in the industry. I worked really hard, but I also had a mentor, Yael, who was really generous with me. That was rare and lucky. But if you're smart and quick and hardworking and willing to give 120%, it shows, and it makes a big difference. I do feel lucky, but I also gave everything to that job for years. 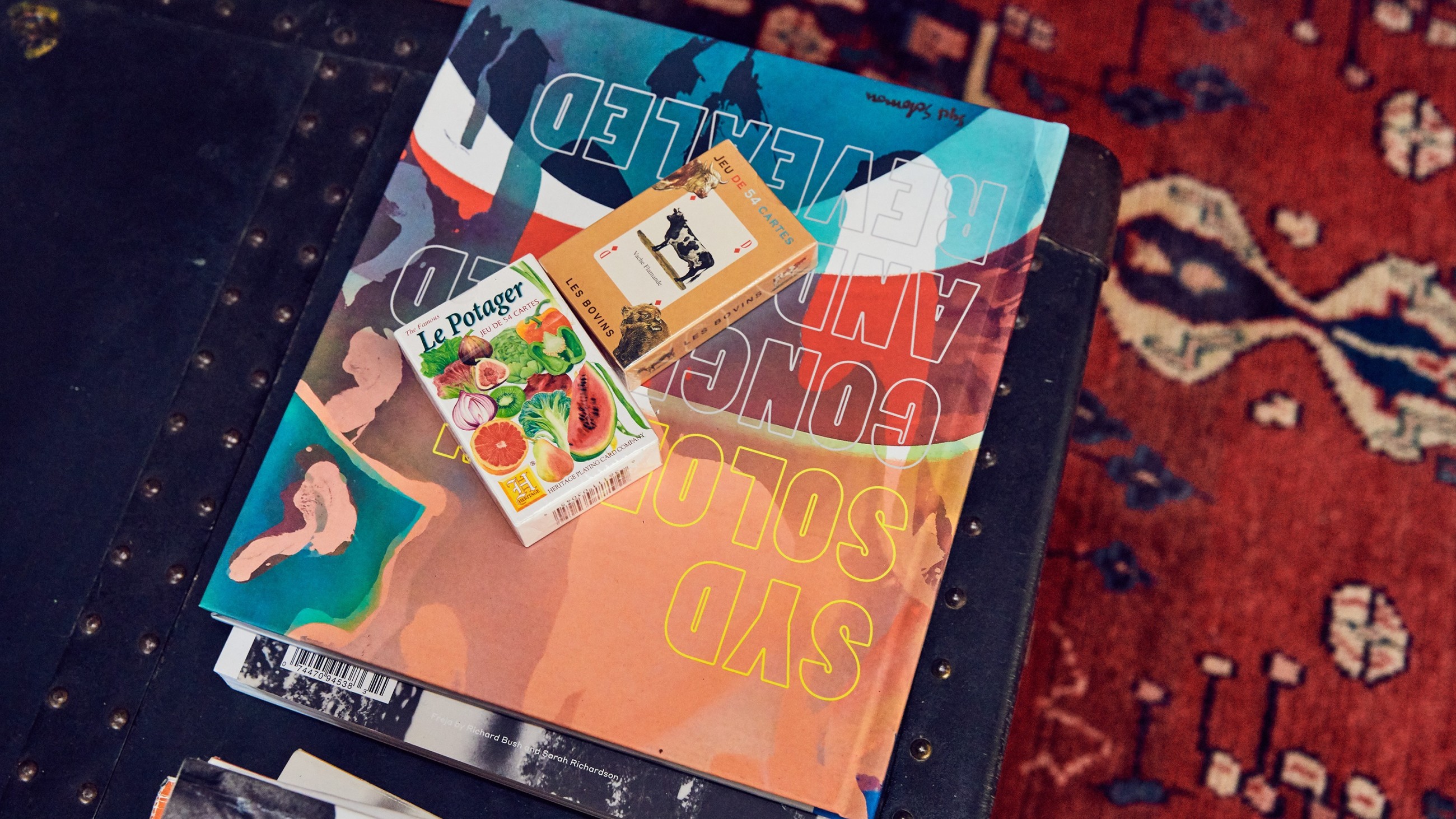 I got the idea for VEDA in 2007. It just seemed like there was a place in the market for a softer, more feminine leather jacket. Not necessarily girly, but something that treated leather more like any other fabric. It was about quality and fit and having this thing that was a little bit more affordable than what else was on the market.

I didn’t know what I was doing, so starting something that was really focused made it a lot easier to figure out the answers to all the other things. I wasn’t trying to source, say, 15 different fabrics and learn how to make a dress. I also think that having that singular focus has been helpful in terms of the longevity of the brand. We make dresses, we make bags, we make things that aren’t leather jackets, but for the most part, they're a really big part of our business and it’s what people come to us for. Maybe it’s the timelessness of the product or something. And I think that being small has allowed us to pivot and change and be agile according to what's happening in the market.

One thing that I also learned from working with Yael was the importance of having a kind of in-house atelier. We have a full-time pattern maker and seamstress, and while it’s an expense, it allows for a lot of flexibility. We try to let all of our stores know, and all of our retailers, and even our customers in the store or whatever, like, “We can do that for you. We can do your sleeve alteration. We can make you a white leather vest for your wedding. We can do it.”

I’ve always worked really well within a box. I feel like it’s helpful to have those parameters. I think if I didn’t, I'd be like “Ahhh, like I don't know what to make.” I’d never get there. I also like that about the fashion schedule too. Even though it’s kind of grueling, it’s sort of nice to be like “Nope, you gotta have a collection! People are coming to see it, so if it’s not there, they’re not buying it, and then it’s a problem.” At the end of every season, I’m like “Whoa! How’d we do that?” You know what I mean? Like, where'd that come from?

People seem to be genuinely excited to use their money to support a cause. 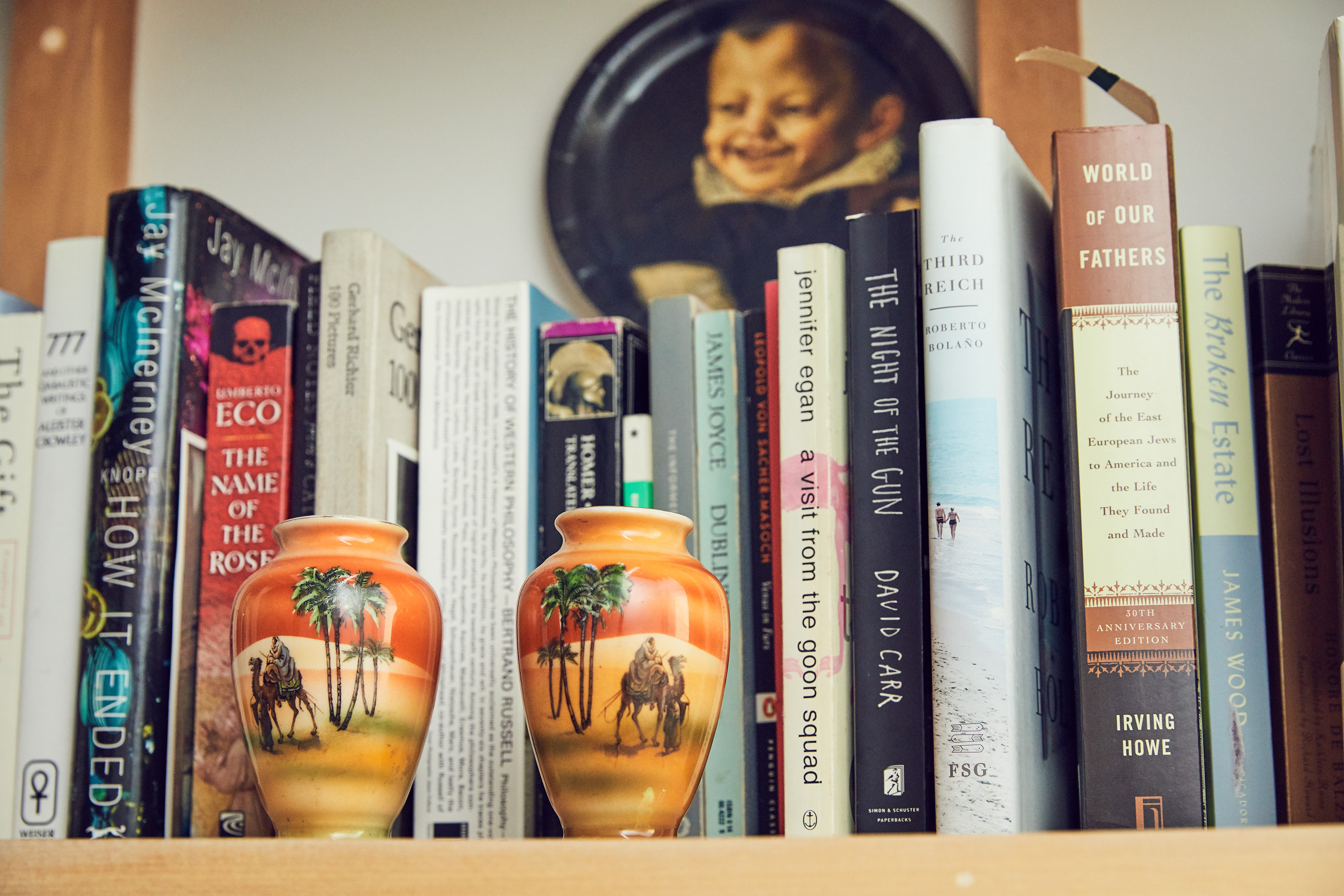 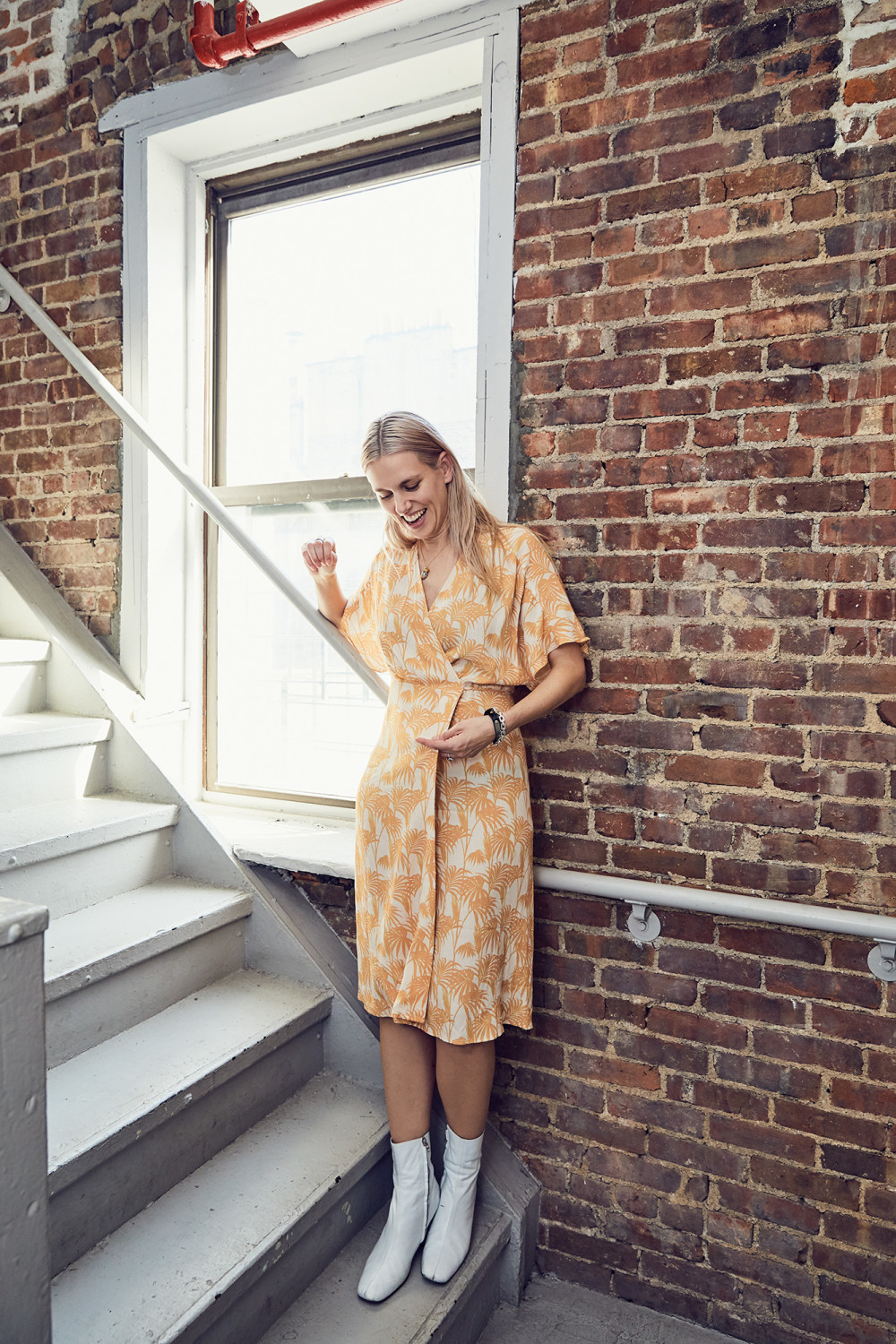 I do sometimes think of doing something different. I think I’m ready to try something new. And that doesn’t mean I don’t want to do this anymore. I’m just trying to decide exactly what that new thing is. Is it a new product category? But that’s the thing really fun about fashion: it is always changing. Right now I’m really focused on bringing in some kind of social element to our brand.

We recently launched a t-shirt with a graphic on it that says “Thank You,” sort of modeled after plastic shopping bags. All the proceeds from that tee go to the Women’s Prison Association. It’s had a really good reception, and that’s inspiring. People seem to be genuinely excited to use their money to support a cause. 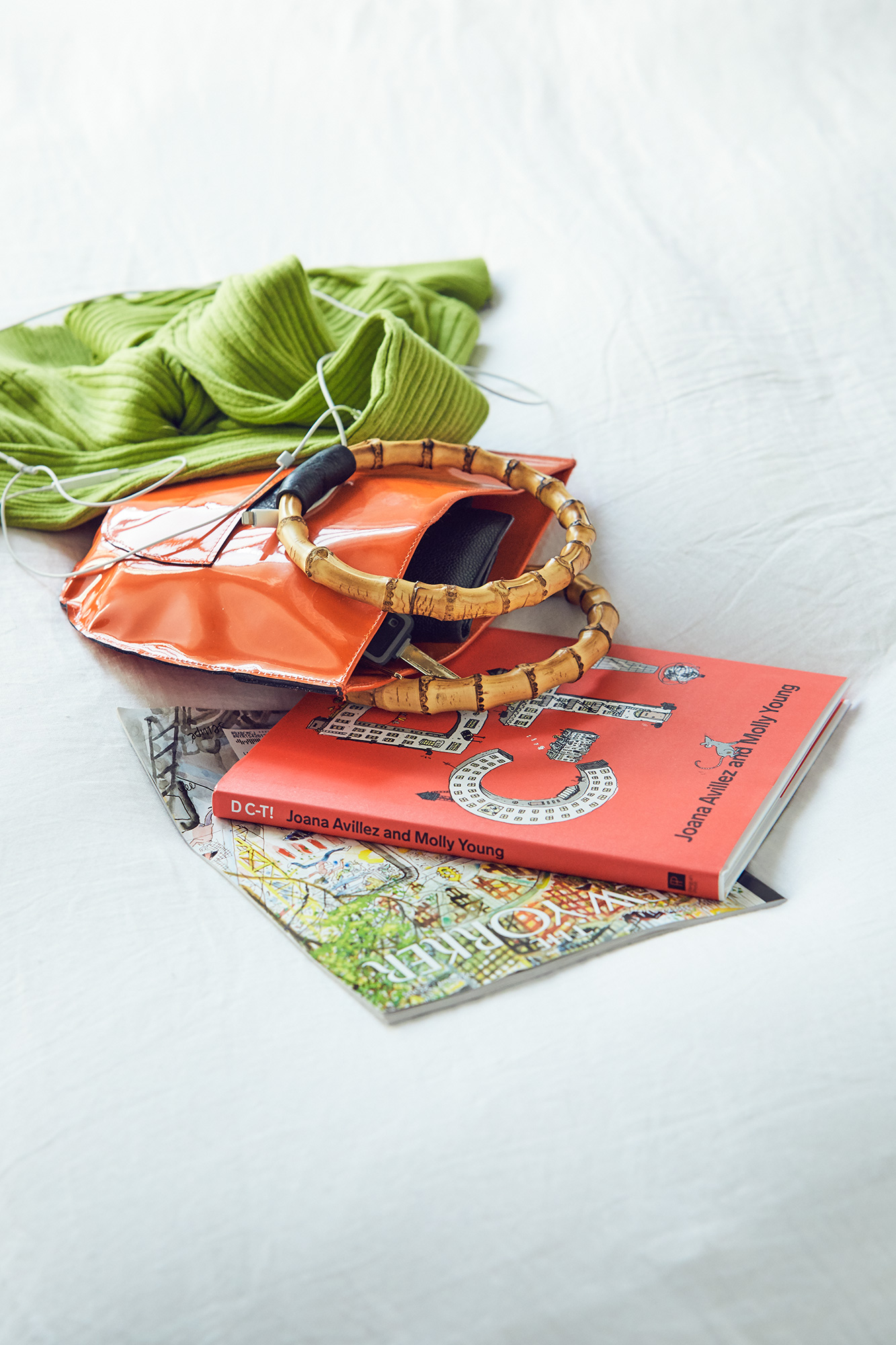 My big dream is to have a job training program where we’re training former or current inmates to learn sewing and other production skills. American manufacturing, at least in terms of clothing, doesn’t really exist anymore. We make a lot of our product in our studio, and people seem to really respond to that. It allows for more instant gratification ands more customization, and it means we're not waiting for four months for stuff to come from China, and then have it be wrong, or get short-shipped, or whatever. It’s a lot of work to produce domestically, and there aren’t a lot of facilities for it.

I feel like a training program like that could solve a lot of problems. It’s not just needing, like, three more sewers to finish my goods or whatever. It’s very difficult for the formerly incarcerated to get jobs for various reasons. Some of that has to do with skills, and also being able to find well-paying jobs that have flexibility, in case you need to be home with your children, for example. That is something manufacturing could offer. It doesn’t have to be a nine-to-five. It can also pay a really good wage.

I was like, how do I even start to talk to anybody or do anything about this? And through my research, I came across the Women’s Prison Association. They do a lot of job training, so I started talking to them about it. I liked their overall model and they really educated me too, like, yeah, great idea but also that is so far down the line for a lot of the women we work with. They need everything. They need legal help, they need child care, they need counseling, they need safe housing. Getting them into the workforce is sort of the last on the list. That was really eye-opening for me.

They’ve been so awesome and I’m just so impressed by them. They’re a relatively small organization, I think, because of the work they do. In the grand scheme of things, they are only working with a handful of women, but they really are making such a huge difference in their lives. It’s all relatively new, but working with them is really informing the way I think about how I want to structure my business moving forward. 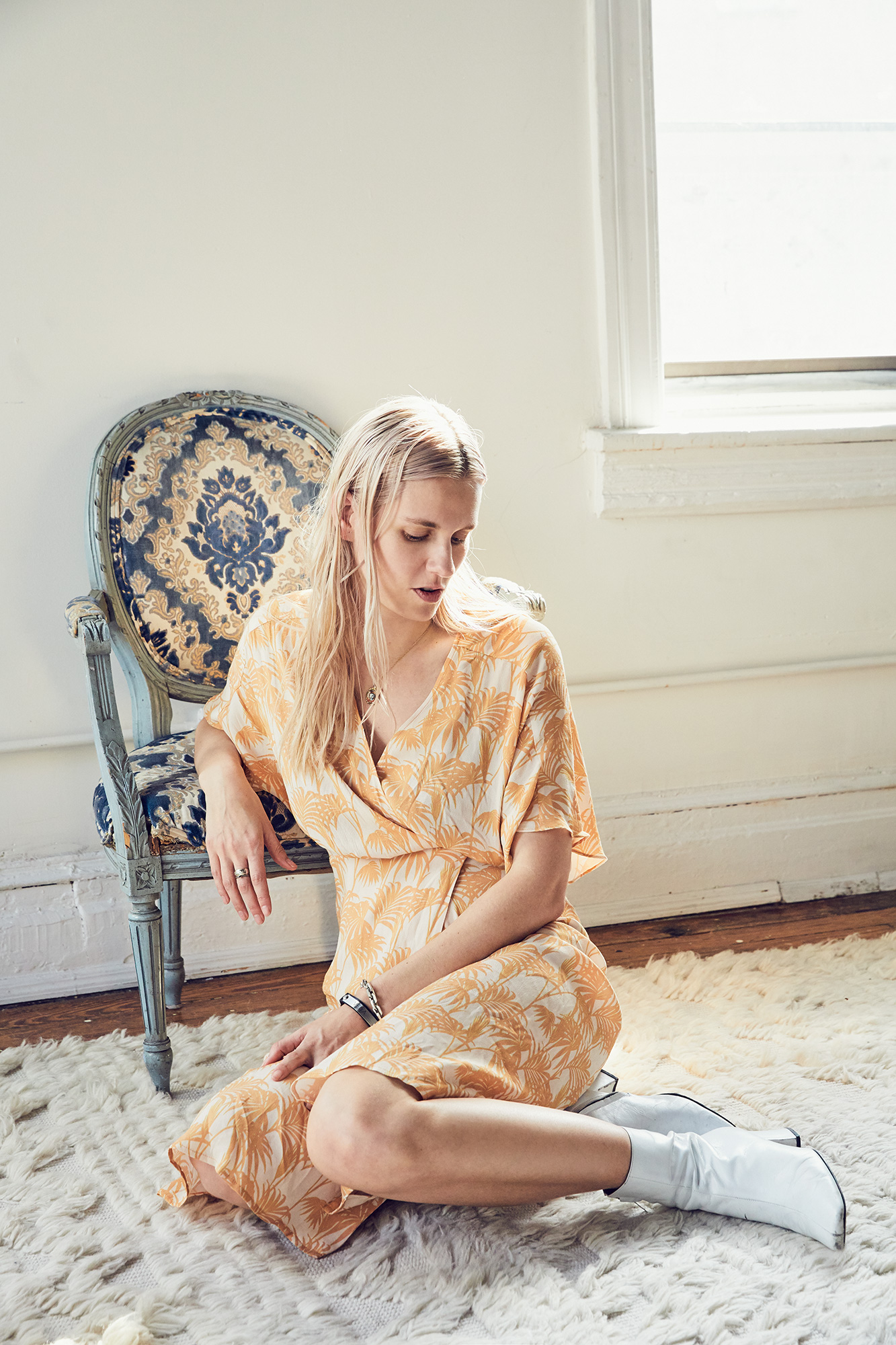 Running the business the way I have has given me the flexibility to be able to make the kinds of decisions where I can say, “You know what, I want to give away all the proceeds for that product.” Or if I want to have an event at our office, I can. Not everybody has that flexibility. Those things can’t happen at a bigger company in the same way. Though, I don’t know, there’s definitely a familial aspect of trying to meet everybody’s needs.

I love the girls I work with. We’re very close. We spend a lot of time together. I'm conscious to balance it though. I like to keep a bit of a separation——I think it’s important for everybody, but I do genuinely value them and love going to work with them every day. I think I’m also in a stage in my life that’s allowed me to be like, okay, I work when I'm at the office. And if I have to take something home, I will. But I carve out time for other things now, and I didn’t used to do that. In my early twenties, I was working 24/7, and I only hung out with people I worked with, basically. Which was really awesome and I got a lot done, but finding that balance has been really nice.

Lately I've been smoking CBD. Does it work? I don't know. I just like it. 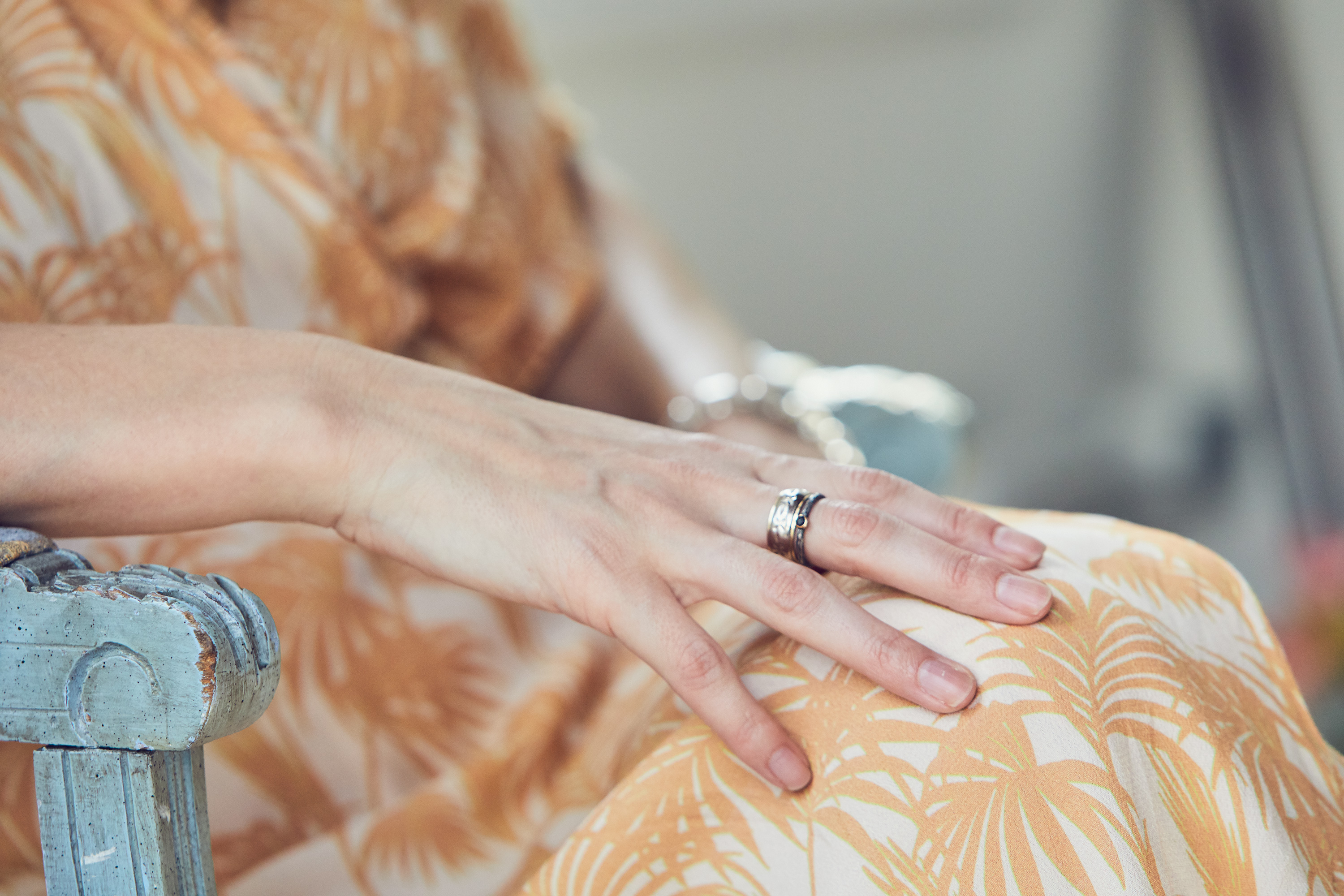 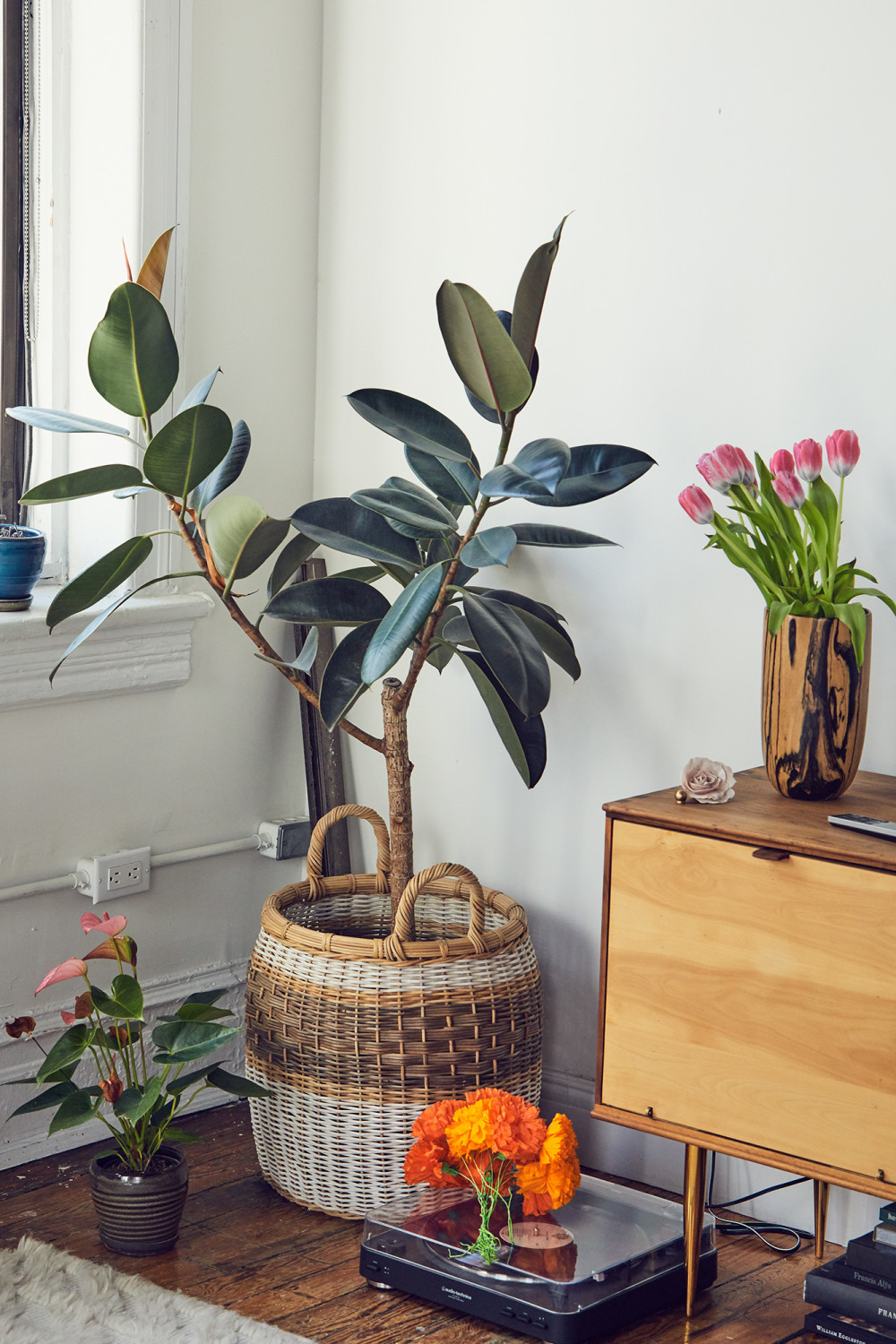 I need a lot of alone time, I think. I unwind just by coming home. Moving into this apartment was really amazing for me. It’s quiet and there's space and that’s so rare in New York–especially in Chinatown. Which is also great, because I get to be near all my favorite restaurants and I’m so close to my office. Although, I guess, that doesn’t help me unwind.

I do smoke weed. Lately I’ve been smoking more—I don’t know if you call it vaping?—CBD. That’s my new thing. I like that. Does it work? I don’t know. I just like it. It’s so subtle and calming. It feels like something you could just like do all day long. New York can be so intense. There’s also something really fun about it—it feels kind of naughty even though it's not at all. Like, “Oh yeah, I'm doing something that’s like taking the edge off and you guys don’t even know.” It’s not like taking a shot of tequila, you know what I mean?

To be honest, I don’t really know any of the brands in the space. I’m not really a connoisseur. There was one—Marley Natural, I think?—that was the one I’ve liked the most so far.

We get it in L.A. and bring it back here. Don’t tell anybody. 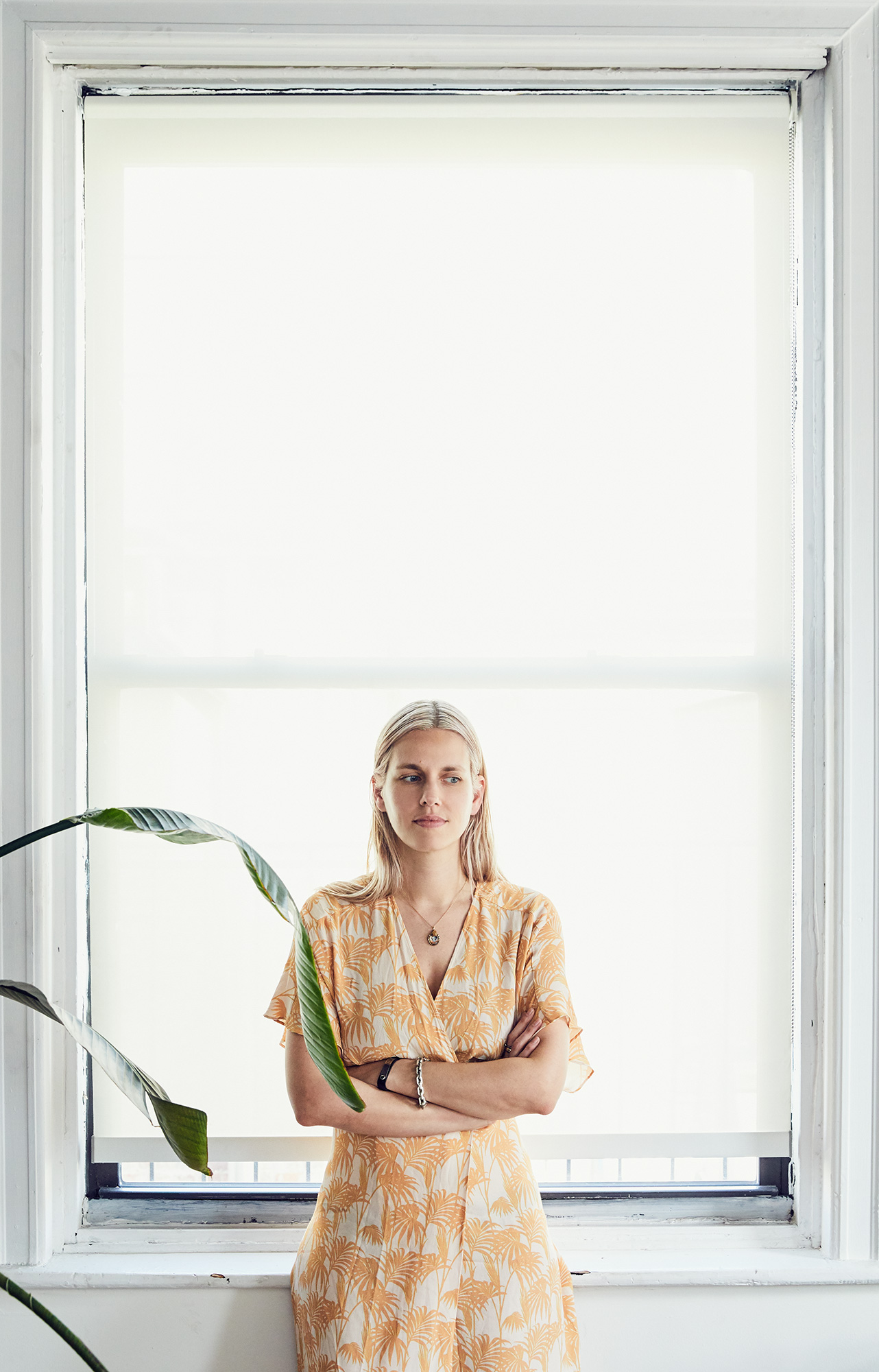 This conversation has been edited and condensed for clarity. Lyndsey Butler photographed by Meredith Jenks at her home in New York City. Shop the Gossamer x VEDA Thank You tee here. 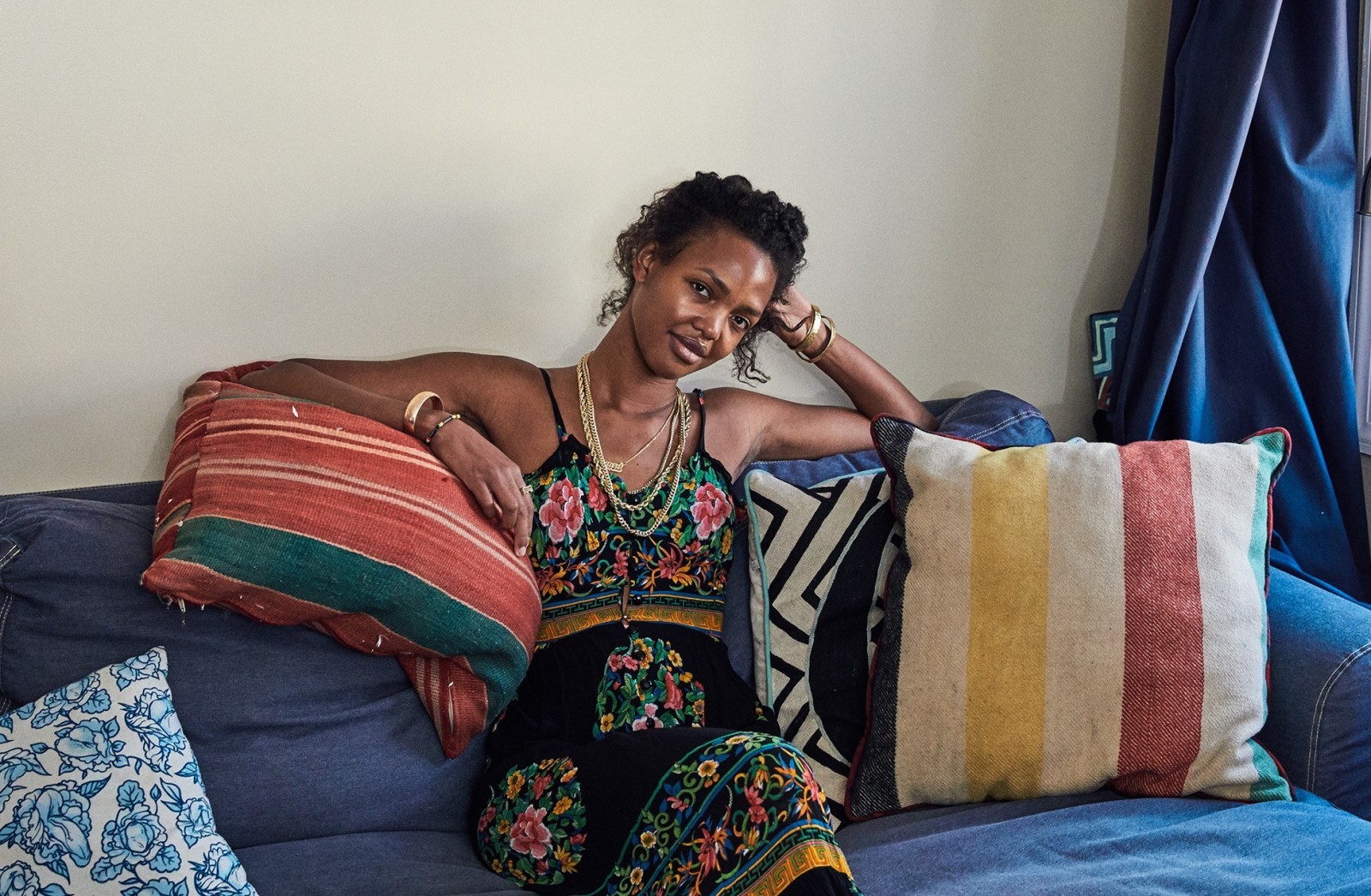